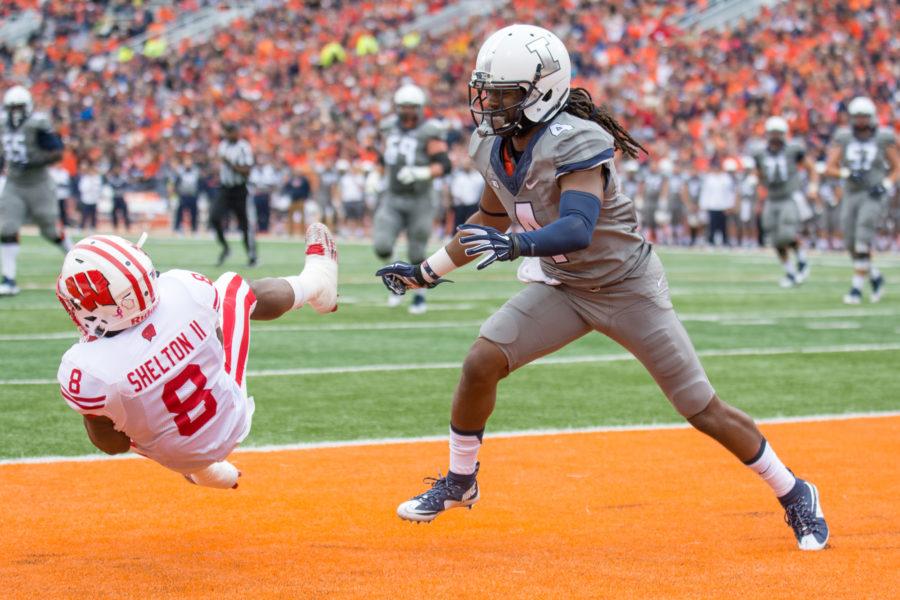 Running back Josh Ferguson and wide receivers Marchie Murdock, Justin Hardee and Mike Dudek were doubtful to play against the Badgers. The team’s injury report released Thursday confirmed the skepticism. All four were out, and Dudek’s absence likely confirms that he’ll be out for the season.

Illinois quarterbacks coach Ryan Cubit had one expectation of Lunt when the Illini played their Homecoming game against Wisconsin.

“He told me that ‘we’re expecting perfection,’” Lunt said. “They expect me to be perfect and I think that’s a good challenge to have, but it’s hard.”

Lunt and his offense were far from perfect in Illinois’ 24-13 loss to Wisconsin. The Illini had trouble moving the ball for much of the game and long series were rare and short-lived. Lunt threw for 278 yards but tossed an interception and threw 21 incompletions.ch

Three of Illinois’ 12 drives lasted longer than two minutes and three drives consisted of more than five plays. Wisconsin possessed the ball for 40:09 compared to Illinois’ 19:51. chThe Illini also failed to make plays at key moments in the game. Illinois was 3-for-12 on third down and failed to convert in both of its fourth-down situations.cg

Illinois’ coaching staff knew that Wisconsin was going to limit the Illini’s running game. Freshman running back Ke’Shawn Vaughn ran for 55 yards on 13 carries, 36 of which came on a touchdown run in the third quarter.ch Vaughn took all of the team’s carries because head coach Bill Cubit preferred Vaughn’s experience to that of junior transfer Henry Enyenihi. chThe decision ultimately made Illinois’ offense one-dimensional.

The lack of playmakers, especially at the wide receivers position, has become an old tune for the Cubit and his staff but still remains a big factor for the offense’s deficiencies. Young players are having a difficult time learning the new system, ultimately hurting the team’s chances to win.

With good Big Ten defenses waiting every week, Cubit admitted it’s hard to make a gameplan with such a limited group.

“It’s hard,” Cubit said. “You have to almost be perfect at times. You need your defense and you need it to be a low-scoring game because we’re not going to be an explosive group, because right now, we’re banged up.”

Lunt and the offense will need to adapt quickly if they don’t want the last two losses to snow ball into something worse. The status of Ferguson and Murdock will likely be a week-to-week evaluation while Hardee decides what he wants to do for the remaining years. Cubit said earlier in the week that it isn’t likely that Dudek will play this year, so the offense will have to adapt accordingly.

Illinois players will look to Lunt for guidance when there are so many injury questions. The quarterback has shown that he can compete in critical situations. His team will need him to produce as they enter the final stretch of the season when Illinois plays four of its five games away from Champaign.

Lunt thinks there were moments to be proud of, but the remaining players have to be extra resilient.

“We had times where we moved the ball well,” Lunt said. “We can’t take one play for granted because it can change a game … you just have to keep fighting.”