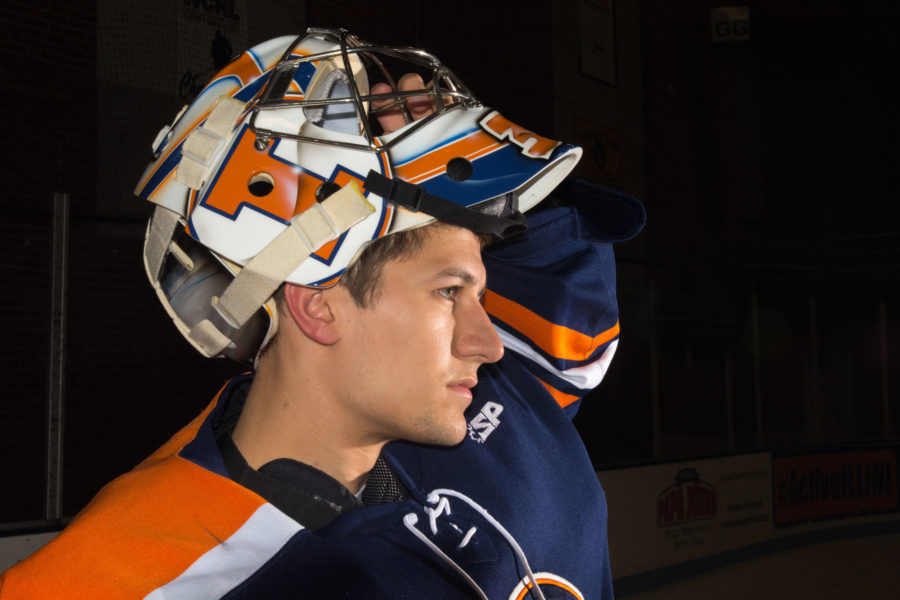 In the series’ opening game, the Illini were charged 14 penalty minutes and only managed to accumulate 12 shots on goal against a team that was averaging nearly four goals per game. However, Illinois skated off the ice that night with a 2-1 victory — a victory that only seemed plausible due to the play of goalie Joe Olen.

Olen recorded 43 saves that Friday night, reaching his best mark of the 2014-15 season and solidifying himself as the Illini’s go-to goalie.

Almost exactly a year later, last Friday, the Illini found themselves facing off against the Bobcats at Illinois Ice Arena, and Olen, once again, was between the pipes facing an Ohio team that was No.7 in the ACHA poll and had scored 59 goals this season.

In a déjà vu situation, Olen showed that sometimes history repeats itself.

Last Friday, Illinois came away with a 2-0 shutout, statement win over Ohio in which Olen denied 42 opposing shots on goal – just one shy of his save total nearly a year ago against the Bobcats at home.

In Saturday’s game, Olen tallied a gaudy 46 saves, allowing Illinois to take a 2-2 score to overtime and an ensuing shootout in which he was just one save shy of securing a series sweep.

“On a league weekend, you have to be on top of your game, especially since (Ohio was) the No. 1 team in the league the weekend before,” Olen said. “I was feeling pretty good.”

Despite Fabbrini’s initial plan coming into the season of actively using all three goalies on the Illinois roster and not having any one see consecutive starts, Olen has emerged as a near must-start in goal.

Olen has built off his experience and success as the Illini’s iron goalie last season when the then-sophomore played in 25 games, compiled a 12-11-1 record, allowed 2.92 goals per game and registered 726 saves.

This season, Olen is credited with four of Illinois’ six wins. Appearing in seven games this season, the junior goalie has racked up 218 saves – good for second in the CSCHL and seventh in the ACHA. His 1.58 goals allowed per game ranks 11th in the ACHA and third in the CSCHL, while his .952 save percentage tops the leader board in the conference.

“When he is on his game, I think he is as good as any goalie in the country,” Fabbrini said. “After he played like he did on Friday he definitely earned himself another start on Saturday. I can’t say that he is our No. 1 guy for the rest of the season, but right now he has proven himself to be our go to guy in the net.”

Olen’s recent performance is perhaps even more significant considering the Illini’s leader in points last season, John Olen, has been out with a broken ankle. Olen is not used to being without his older brother on the ice with him, as the two grew up practicing and playing together. The only significant period of time the brothers haven’t played with each other was when they had separate stints in the junior league.

“I started playing when I was two and he started when he was four. So that makes me two years better, but no one seems to mention that,” Joe said. “This is actually the first year we’ve gotten to play a lot with each other at Illinois, it’s been a really cool experience.”

With John out for another three-to-five weeks, the Illini will need little brother Joe to continue to dominate in net and keep the Olen name on the lips amongst fans and opposing coaches. Despite playing without his brother, Olen says he feels no pressure to perform at a high level.

Instead, Olen has put faith in his teammates to step up with him, and if he’s going to get motivation from anyone, it’s going to be from his ice mates.”

“I have trust in the team we put out on the ice every day, so John being out isn’t going to affect the way I play,” Olen said. “I love seeing other guys stepping up…it gives me a boost and just makes me want to play harder for them.”fm?