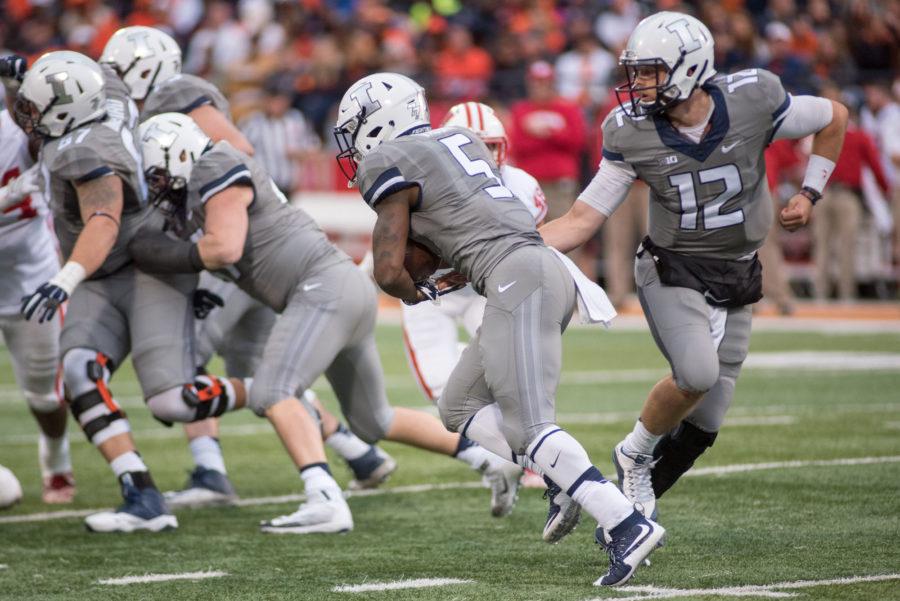 Quarterback Wes Lunt hands off to running back Ke'Shawn Vaughn during the Homecoming game against Wisconsin at Memorial Stadium on Saturday, October 24. Illinois lost 13-24.

Illinois football will find itself in a battle for the trenches as statistical opposites come face to face this weekend.

The Nittany Lions lead the Big Ten in sacks with 31, and Illinois is last with nine. But Illinois is first in the conference in the sacks against category, allowing just eight sacks. Penn State is last — its offensive line has allowed 28 sacksbr.

“It’s kind of an interesting statistic,” Head Coach Bill Cubit said. “It’s probably the first time I’ve seen that where one team is No. 1 and one team is last in both categories. We’ve got to make sure we protect the quarterback in this game. They’ve got some really high-level kids.”

The Illini will be looking for their second victory at Penn State, having won at State College only in 2010br. In the first of three straight Big Ten victories, Illinois won last season’s matchup off a field goal with eight seconds leftbr.

Both team’s quarterbacks are pocket passers, with not much movement, relying on their offensive lines for protectionbr.

“He’s a great quarterback,” defensive end Jihad Wardbr said. “I see him as a big threat and he owns the team. But once we get in his head and let him know that we’re really there, we can distract him a little bit.”

The offenses’ continuing priority is to keep Lunt safe. He missed games last season to injuries so the offensive line is committed to making sure that does not happen again this year.

Illinois has allowed just 1.14 sacks per game, ranking No. 15 in the country in that categorybr.

Ward said he’s seen marked improvements from his offensive lineman during early season practice competitions. In a game where both teams are statistical opposites, Ward has offered advice to his teammates:

“Just look at my waist because my waist is not going anywhere.”

The game has even more meaning for Ward, whose hometown is Philadelphiabr. He’s always wanted to visit Penn State, but never had an opportunity, so he’s looking forward to taking in the stadium environment. He will have plenty of fans at the game with family and neighborhood friends coming.

For Illinois offensive lineman and coaches, the focus will be on stopping No. 95, defensive end Carl Nassib, who leads the FBS with 12 solo sacks for a loss of 88 yards and 16 solo tackles for lossbr.

Cubit and offensive lineman Ted Karras said he is a key factor in the Nittany Lions’ defensive strategybr.

“It’s going to be a great battle,” Karras said. “Something has to give and hopefully we can shut them out.”