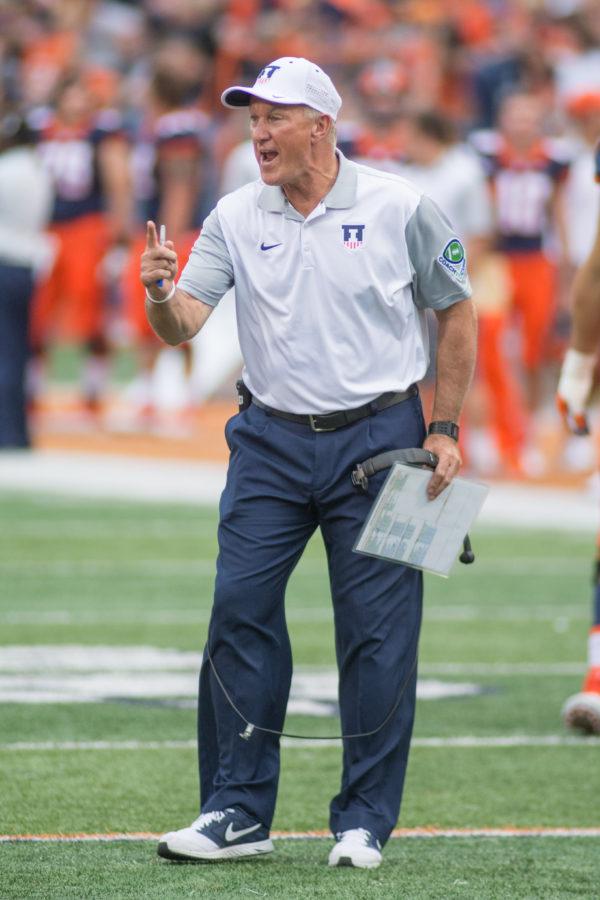 The Illinois football investigations were hanging over head coach Bill Cubit’s and the heads of the rest of the team since former player Simon Cvijanovic made allegations against former head coach Tim Beckman in May.

The preliminary findings of the investigation resulted in the firing of Beckman in August for player mistreatment and withholding scholarships.

But when Cubit heard the news of the firing of Illinois athletic director Mike ThomasCC on Monday morning, it was almost anti-climactic.

Cubit called Thomas and thanked him for the opportunity and for the good treatment he received during his three years at Illinois. He glanced over the 1,200-page investigation for two minutes to see if his assistants were cleared — they were.

Cubit knew everything he needed to know. He met with his coaching staff, and the group didn’t talk about what happened in the morning. They watched tape of their 48-14 win over Purdue and moved on to the next task: Ohio State.

“I’ve been in this business for so long, you take a step back,” Cubit said. “Mike, just like everyone else here, have been really good to me. I cannot say that during my three years here that I had a bad experience with anybody here … The first thing you do is what am I going to do for these student-athletes?”

The interim head coach has always answered questions in a respectable manner during his time in his current role. He’s made the media laugh and boosted the confidence of students, alumni and fans. He’s been professional after Beckman was fired a week before the season and was so during Monday’s press conference.

Cubit, like everyone else on his staff, was cleared of any wrongdoing when the University released Chicago law firm Franczek Radelet’s investigation findings. The investigation described how Beckman mistreated players: belittling them when they sought medical treatment and threatening to take away players’ scholarships. When he was asked if he had witnessed any of the wrongdoings Beckman was accused of, Cubit said he had not, mentioning he hears almost nothing during practices because he is on his headset reading a list of plays.

Although Thomas was found innocent of any wrongdoing, Interim Chancellor Barbara Wilson thought there were too many distractions in the department and felt it was right to dismiss Thomas.

The investigation and the firings have surrounded the team this season in the eyes of the fans and the media. Cubit said it hasn’t been any distraction in the locker room because of the investigation.

“None,” Cubit said. “I know the outside looks at it, the inside looks at it and gets to work. I know that sounds crazy with everything that’s been going on, but I can honestly say that’s all we do … If I waste five minutes on doing something other than getting these student athletes ready, I’m not doing my job.”

For some players, the news came a surprise, since Thomas was not accused of any wrongdoing. Quarterback Wes Lunt said the team knew the report was going to come out some time during the season, and there was nothing they could do. They could only wish for the best for Thomas and his family.

In a season filled with off-the-field headlines, for veteran players like running back Josh Ferguson — who’s gone through two coach firings —, the change of athletic director has little effect on him.

“At this point, it’s hard not (to be numb to the news),” Ferguson said. “With a new athletic director, there’s a potential of wanting to bring in a new head coach and I hope there is a way we can keep some continuity in the program because we’re headed in the right direction and coach Cubit has done a great job.”

Neither Wilson nor Interim Athletic Director Paul KowalczykCC commented on whether Cubit would return next season. Both were proud of the work he’s done this season but said a decision won’t be made until the end of the season.

Cubit couldn’t help but laugh when he was asked if a win over Ohio State would guarantee him the job. He knows that he will waste time dreaming about that scenario.

The only way for Cubit to make that dream a reality is going back to a principle that he’s exemplified throughout the season.

“If I take away from (how our kids fight), then I’m not doing my job,” Cubit said. “I’m not going to do that. I’m just going to keep fighting until whenever (his departure) happens, and I’m hoping it’s not for a long time. I’m battling, I’m fighting.”