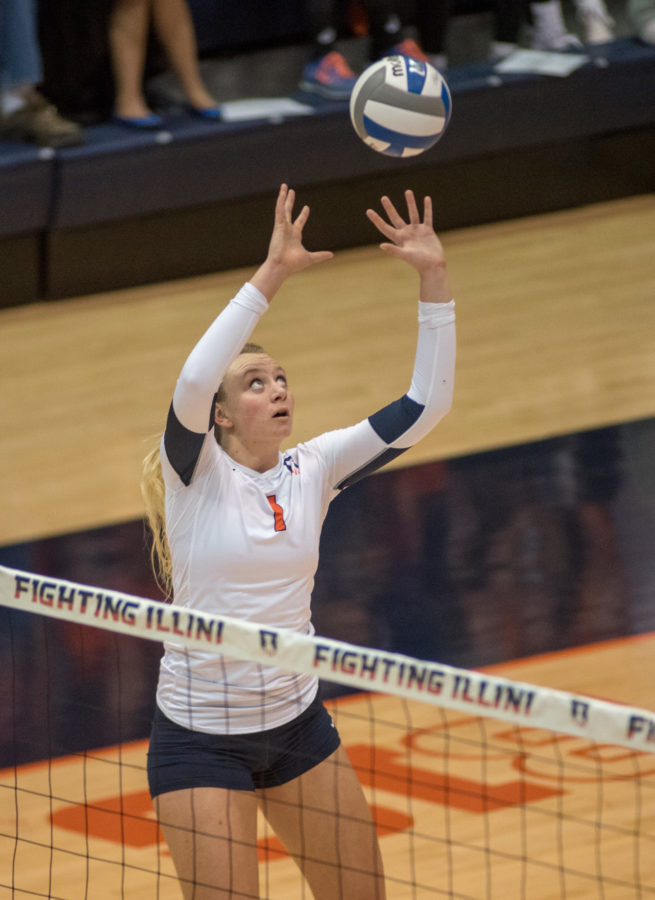 Jordyn Poulter sets the ball during a game against Iowa at Huff Hall. Poulter is this week’s Illini of the Week.

Illinois freshman Jordyn PoulterCC returned to the starting setter position Saturday after she was replaced a week earlier by senior Alexis ViliunasCC.

Poulter was put into the match against Northwestern on Wednesday. When she came in, the Illini were down 23-20 in the third set. The team would go on to lose the set but managed to come back and win the match in five sets.

On Saturday, Poulter recorded 47 assists and 16 digs, and the team hit .239 off her in its second win over the Wildcats.CC Head coach Kevin HamblyCC was satisfied with her play for the most part, but there were times when she made freshman mistakes.

“I think sometimes in transition and at the end of the third set, she got a little anxious and rushed some things,” Hambly said. “All in all, I liked her energy and the way we played. We hit good numbers off of her, so I feel pretty good about that.”

Stadick returns to form against the Wildcats

Middle blocker Katie StadickCC had one of her best games of the season in Saturday’s game.

She was a major contributor in the team’s season-high 19.5 blocks, recording a season-high 10 blocks in the match. It was the first time she posted over five blocks since recording seven against Maryland on Sept. 25.

Hambly said Stadick held her own against Northwestern’s Symone AbbottCC, the team’s kills leader. He said that Abbott was unable to find her rhythm throughout the match, and Stadick was a big reason for that.

“I thought Katie Stadick did the best job blocking she has done in the last month and a half,” Hambly said. “She has been trying to figure out some things, and has been struggling. She made some great moves on Abbott after Abbott stopped testing (Naya CrittendenCC).”

Illinois tripped up in third set

In what was an otherwise stellar outing for the Illini, the Wildcats managed to avoid a sweep with a narrow third set victory.

Northwestern built a 23-18 lead, before Illinois made a 6-1 run to tie the match at 24. Outside hitter Jocelynn Birks CCsaid the team let up in the middle of the set, which is something the team struggled with in its earlier losses this season.

“We don’t want to let up when we are ahead or not taking the pressure off,” Birks said. “That’s something we started the fourth set thinking about. I thought we did a pretty good job with that through the rest of the fourth set.”

Hambly said the team’s 10 errors were the main reason for losing the set, and he was pleased with the way the players cleaned up their game in the fourth and final set. The Illini made just four errors in the deciding set.??