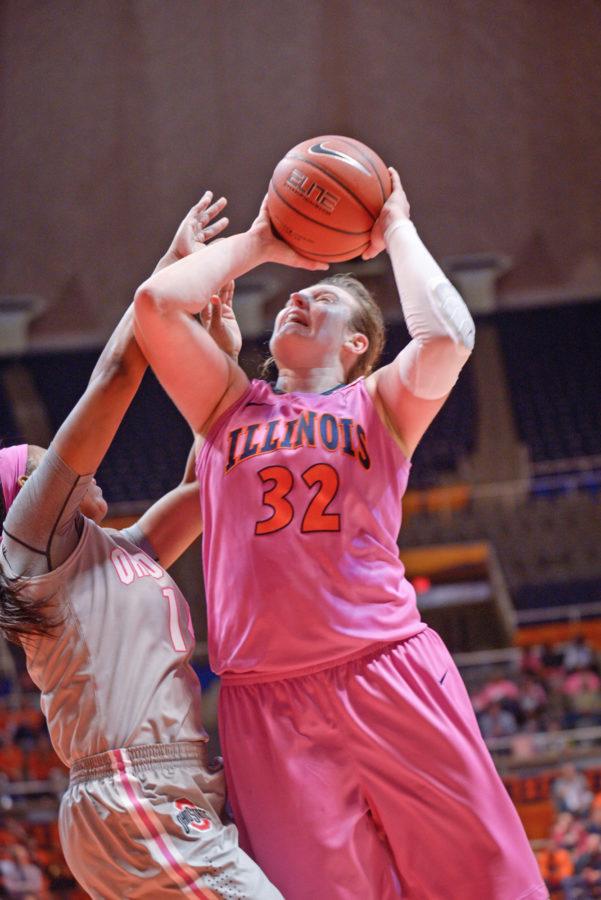 Illinois’ Chatrice White attacks the rim during the game against Ohio State at the State Farm Center on Saturday, February 14, 2015. The Illini won 66-55.

Recently fired athletic director Mike ThomasJT hired the Illinois women’s basketball coach in 2012JT. While Bollant expressed disappointment about the firing, he realizes he needs to move on.

“Mike hired me and I think the world of him,” Bollant said. “He’s been great with us, and I don’t think there’s many AD’s that have been at more women’s basketball events than he’s been at. It’s a hard thing for us, but we’ve got to control what we can control and move forward.”

Bollant has a chance to move forward this Friday.

Illinois kicks off its season Friday against Chicago StateJT. While the State Farm Center is still under construction, Illinois will play its first four games of the season at Parkland College in ChampaignJT.

Illinois experienced the atmosphere at Parkland last week in its 95-36 exhibition win against IndianapolisJT. Parkland’s gym capacity is about 2,000 compared to the State Farm Center’s 17,200JT.

“With the bleachers that come down almost right onto the court, I’m sure the point guards are frazzled when they see two guards running up at them,” White said. “Alex (Wittinger)JT and I, our length in the backcourt, definitely helps us too.”

Illinois’ exhibition game was also a good learning experience. White said she noticed a difference in the tempo of the game with the new quarter system in place. She also experienced the rule change that prevents hand-checking. Even with the new defensive rule enforcements, the Illini recorded 20 steals against IndianapolisJT.

Illinois’ defense has another chance to thrive on the defensive end Friday against the Cougars. Last season, Chicago State was 4-25 and averaged 52.8 points and 22.4 turnovers per gameJT.

Despite Chicago State not having an intimidating 2014-15 season in terms of stats, Bollant is expecting the Cougars to challenge Illinois this weekend.

“Anytime an in-state team gets to play Illinois they get awfully excited and it’s kind of their Super Bowl,” Bollant said. “I bet we will see their very best. They’re going to play some zone so we have to prepare for that.”

With Chicago State expected to play a zone Friday, Illinois will need to utilize its perimeter shooting.

Bollant may also look to the Illini freshmen this Friday after their performance against Indianapolis.

With 11 players on the roster this season after a handful of players transferred last year, the Illini’s freshmen may be utilized more than they were expected to.

Kirkpatrick and Rice each had over 10 points in the exhibition game while Wittinger led the team in rebounds with eightJT.

Bollant realizes that moving forward, most opponents will be of a higher caliber than Indianapolis, but the game put Illinois in the right direction for Chicago State on Friday.

“Every game is different,” Bollant said. “It’s not what you’ve done last week, it’s what you’re doing now, so we’ll play against a better Chicago State team and go from there.”