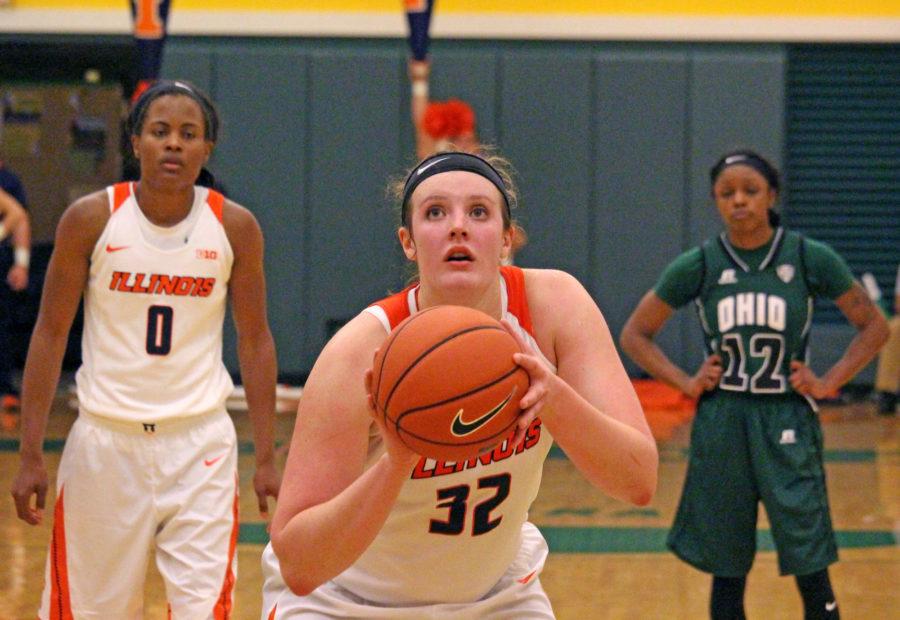 Chatrice White shoots a free throw at the Illinois vs Ohio University game at Parkland College on November 14, 2015. Illinois won the game 62-53.

The Illinois women’s basketball team looked to carry momentum over from its 31-point victory on Friday right into its game with Ohio University (0-0).

And although it didn’t go as scripted, the Illini escaped with a win against the Bobcats on Sunday.

The visitors jumped out to a 7-point lead, holding the Illini scoreless for the first two minutes of the game. The first quarter ended with Ohio up by 12 having outscored Illinois 23-11. The main reason for the scoring differential was in the shot percentage department. The Bobcats made 50 percent from the field and equaled that percentage from behind the arc. The Illini shot a mere 25 percent — 33 percent from deep.

Illinois head coach Matt Bollant calmed his players and told them to let the offense come to them as oppose to forcing the issue. He wanted his players to cut down on taking quick shots and urged his team to drive to the basket in order to draw fouls.

On the defensive side of the ball, Bollant implemented a switch from man-to-man to a zone toward the end of the first quarter, which he thought pushed the tempo against the Bobcats.

Illinois responded in a big way in the second quarter — with the help of that zone defense — to go along with better shooting. The team cut Ohio’s lead to two, outscoring the Bobcats by 10 in the period. The first half concluded with the Illini trailing 28-26.

A big part of Illinois’ comeback effort was aided by sophomore center Chatrice White. The Nebraska native finished the first half with eight points, nine rebounds and three blocks. Nevertheless, White credited the comeback to the defense.

“We played zone today, and that just really sped (the Bobcats) up a little bit and made them take some outside shots, and force it to places they really didn’t want to go to,” White said. “That just really helped us pull it off today.”

Both teams traded punches in the third quarter with neither team able to pull away and the Illini entered the final quarter of play with a four-point advantage. While Illinois slightly improved its shooting percentage from the first half, the Bobcats went cold from the field. Ohio shot 31 percent combined the first three quarters after making 50 percent of its attempts in the first quarter.

Illinois held onto its lead in the fourth quarter, eventually pulling out a 62-53 victory. Hot shooting — the Illini shot 50 percent in the second half — helped Illinois right the ship in the second half, but Bollant pointed to another factor as well, saying that his team had more poise.

“In the first half, they pressured and we were probably a little too excited, and then we got a little rattled when they made a run,” Bollant said. “Second half we got more off our type of shot, and it wasn’t quite as fast and more where we were attacking the rim.”

Redshirt sophomore Kennedy Cattenhead added seven points and six rebounds, and alluded to positive communication as a reason for success.

“I think telling our teammates ‘good job’ or ‘you’ve got the next one’ or just helping them get their confidence up really helped to get that momentum,” Cattenhead said.