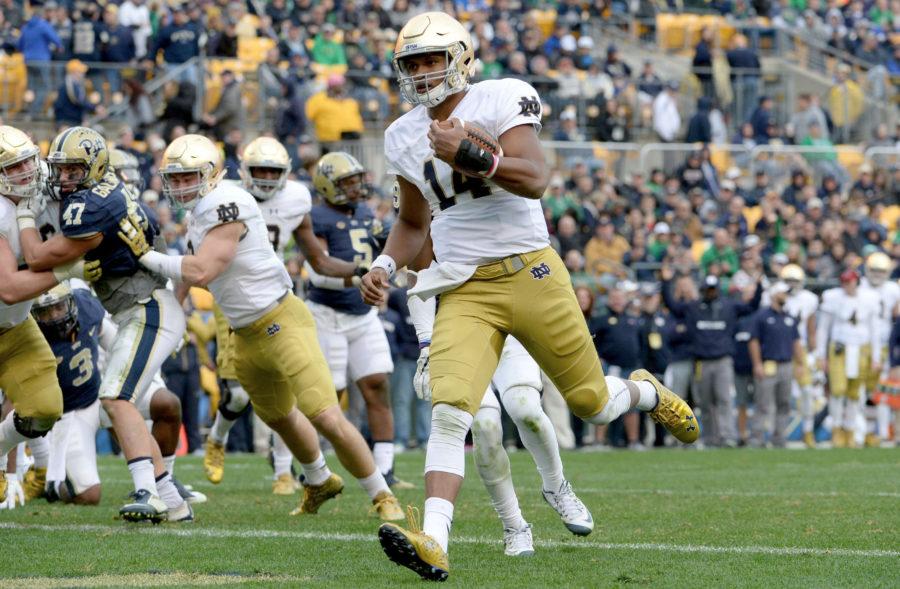 Editor’s note: Each week, The Daily Illini staffers will offer up their take on the teams that should make it into the College Football Playoff.

The Tigers continued their reign of power in college football with a 37-27 win over Syracuse. With only Wake Forest and South Carolina remaining, Clemson may have the best chance of any for a perfect season.

Alabama flat out dominated a good team in Mississippi State. Even though the Crimson Tide’s one loss came to a middling Ole Miss team, they’re aren’t going anywhere.

The Irish’s 28-7 win didn’t have the biggest margin. But Notre Dame is the best one-loss team behind Alabama in the country, and winning at Stanford would cement its place in the playoff.

They may be the defending national champions with a perfect record, but the Buckeyes aren’t a top-three team. Maybe wins over Michigan State and Michigan would change the conversation, but Ohio State hasn’t been playing like a top team lately.

Clemson has nary a blemish on their season thus far, and has an easy remaining climb to an ACC title match-up with North Carolina

Alabama continues to dominate every opponent in its path and is the most fearsome team in the country.

The Buckeyes have done the best they could against an easy schedule, but getting through the state of Michigan unscathed will truly put this team to the test.

The lack of a conference title may hurt Notre Dame’s résumé at the end of the year, but for now, the team’s has endured one of the toughest schedules in the country and only lost to the top-ranked team.

The Tigers have locked up the top spot in the country, assuming they win out. One-loss North Carolina looms in the ACC Championship, but Clemson should have no problem getting there.

The Crimson Tide are the best team in the SEC, again. They have a soft spot in their schedule this weekend against Charleston Southern, but should remain safely in the top four.

The Buckeyes have cruised through this season. They haven’t won by dominating margins each week, but they have some of the best players in the country at several positions. That personnel, more than anything, makes them a formidable postseason opponent, but they have to get past Michigan State and Michigan first.

The Cowboys are the “fun” team in the top four. They score a bazillion points a game and will have a big test this week against Baylor. If the Cowboys are the undefeated champion of the Big 12, they should make the CFB over a one-loss Notre Dame that has no conference title.

Showing dominance throughout the ACC and a signature win against Notre Dame puts Clemson at the top spot. The only obstacles they face before the playoff is the fear of upset against Wake Forest and South Carolina, as well as the ACC title game.

Similar to Clemson, Alabama has some strong wins on a tough schedule, with just one loss on its record. They also have an easy schedule coming up, but Florida will likely be awaiting them in the SEC title game. The Crimson Tide have all the tools to make it back to the playoff.

The final two spots are a toss up. Oklahoma State gets the spot as the last hope for the Big 12 to get in the playoff. The Cowboys score a ton of points and have a big signature win against TCU. They have their toughest stretch of the season against Baylor and rival Oklahoma. A loss could let Notre Dame steal their spot.

The defending champs have had a fairly weak schedule so far and have not had any signature wins. The Buckeyes have their three hardest oppenents left with Michigan State, Michigan and presumably Iowa in the Big Ten Championship. If the Buckeyes falter, Notre Dame and Iowa is in a prime position to take their spot.