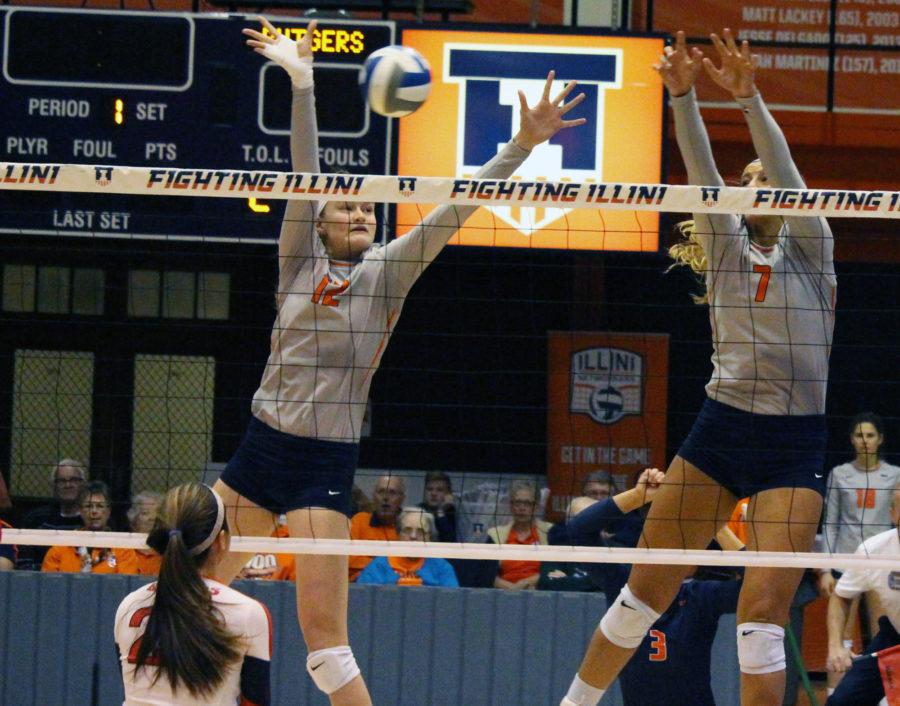 Illinois’ Katie Stadick (12) and Jocelynn Birks (7) attempt a block during the game against Rutgers at Huff Hall, on Saturday, Nov. 14th. The Illini won 3-0.

It’s hard for the Illinois volleyball team to not look ahead.

The program has had lots of success in recent years under head coach Kevin Hambly, and NCAA tournament appearances are a common experience for the Illini.

Yet, this year Illinois is situated firmly on the bubble with four regular season matches left on its schedule. For many teams this would be the time to kick it into another gear, but Hambly said the team has had a plan since early on in the season and is prepared to make it to the tournament.

“When we were 4-6 we sat down and looked at the schedule, and we really gained some perspective,” Hambly said. “We don’t feel like we’re playing for our lives right now.”

The first step along the way to the tournament is on Nov. 18, when Illinois takes on Wisconsin. The Illini dropped their first meeting with the Badgers in four sets, but Hambly said this team has come a long way since that Sept. 30 matchup.

“We’ve been moving in a good direction defensively and we’ve got Jordyn (Poulter) out there running the offense,” Hambly said. “Defense is our calling card, and now we are finally playing more our style. The only thing we haven’t done is win the 50-50 matchups that we’ve had yet.”

Those 50-50 matchups Hambly alludes to have plagued Illinois since the beginning of the season. The Illini have beaten up on the teams at the bottom of the Big Ten standings, going 9-0 against teams that currently sit below them. But Illinois has yet to beat a team ahead of the in the current standings, going 0-7.

The Wisconsin matchup will be the team’s next chance to right the ship, and junior middle blocker Katie Stadick said this team is hitting on all cylinders.

“Offensively, Jordyn has been spreading the ball around, and blocking and defense is always a huge part of who we are,” Stadick said. “Of course, it’s going to be an exciting match and it’s nice to get a shot at them here at home.”

The Illini plan of attack will center on controlling Wisconsin’s strong outside hitters: Kelli Bates and Lauryn Gillis. The duo has combined for 580 kills on the season, and Bates is the reigning co-Big Ten Player of the Week.

Stadick said the team’s prepared for a hard-fought match.