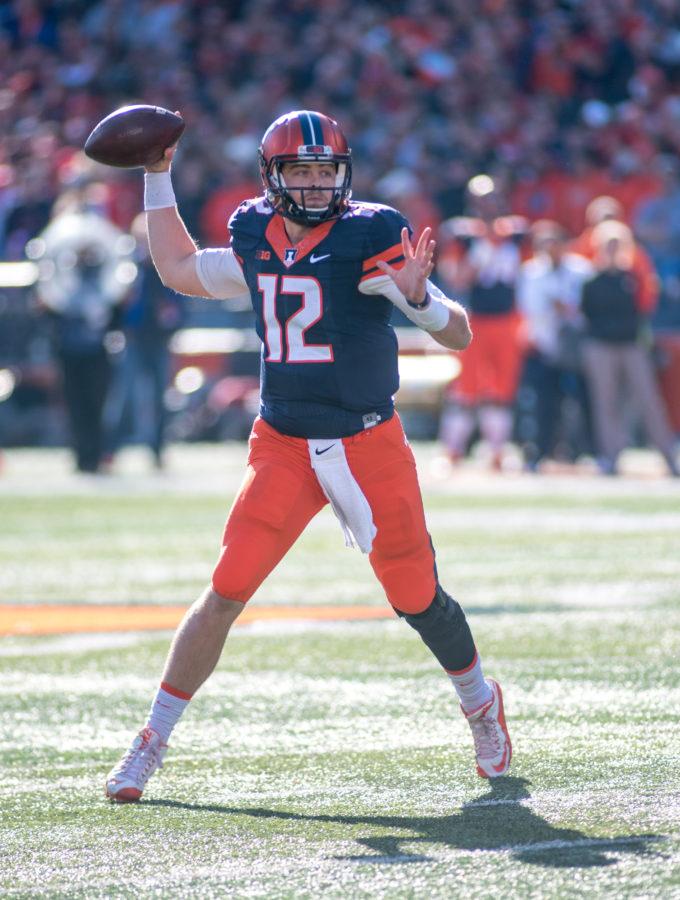 Quarterback Wes Lunt winds up to throw a pass during the game against Ohio State at Memorial Stadium on Saturday. Illinois lost 28-3.

Illinois football head coach Bill Cubit knows what his players have in mind heading into the Illini’s game against Minnesota on Saturdaybr.

He’s heard the talk between players and some of the coaches: They want to go back to a bowl game. Some players have specific goals: offensive lineman Ted Karrasbr wants to win eight games this season. Others just want the experience of going to a bowl game after a season filled with off-the-field headlines.

Cubit knows about the talk, but he won’t bring it up with the team. He has no problem about his players talking about going to a bowl game, but he wants his players to stay focused — the Illini must win one of their remaining two games to become bowl eligible.

While “winning the next one” is always a team’s first priority, quarterback Wes Lunt admitted that the postseason is something the Illini are thinking about.

“We want to make it to a bowl game, that’s on our mind,” Lunt said. “To get there, we have to focus on today and worry about Saturday when it gets here.”

Standing in the way of Illinois reaching its sixth win is a team that might’ve experienced as much adversity as Illinois. Minnesota’s off-the-field issues started in August when former Athletic Director Norwood Teague resigned suddenly because of sexual harassment incidents involving non-student university employeesbr.

The university has an interim director while the school searches for a new leader.

The adversity continued when head coach Jerry Kill suddenly retired on Oct. 28 due to health conditionsbr.

Kill has battled seizures after being diagnosed with stage 4 kidney cancer in 2005 — even with the cancer in remission, the seizures have continuedbr.

Defensive Coordinator Tracy Claeysbr took over and has the team motivated to play for Kill.

The Golden Gophers are 0-3 during Claeys’ tenure as head coach, but all three losses came from top-15 teams — Michigan, Ohio State and Iowabr.

Although Minnesota has come up short against the Big Ten’s elite teams, the players are motivated to fight for their old and new head coaches.

Claeys was given a three-year contract extension to be the team’s head coachbr.

“Tracy has done a great job keeping those guys together,” Cubit said. “They’ve just been coming up a little bit short. But they’re a good football team and they will pose a challenge.”

Lunt and the offense will try to rebound after a bad performance against Ohio State.

Minnesota ranks seventh in the Big Ten in total defense, 12th in rush defense and fifth in pass defensebr. Cubit said that freshman running back Ke’Shawn Vaughnbr is highly questionable for the game after suffering a concussion against the Buckeyes. Henry Enyenihi might play against the Gophers depending on how he practicesbr.

Illinois’ defense will try to limit a Minnesota offense that has dealt with injuries too. Quarterback Mitch Leidner has thrown for 2,167 yards, 11 touchdowns and seven interceptions and can also run outside the pocket, rushing for 177 yards and five touchdownsbr.

The Illini will need to play against a competitive Minnesota team that needs to win its final two games to become bowl eligible.

Playing in a bowl game is their goal, and they’d like to have that squared away before the last game of the season.