Illinois football has chance to play in college football bowl 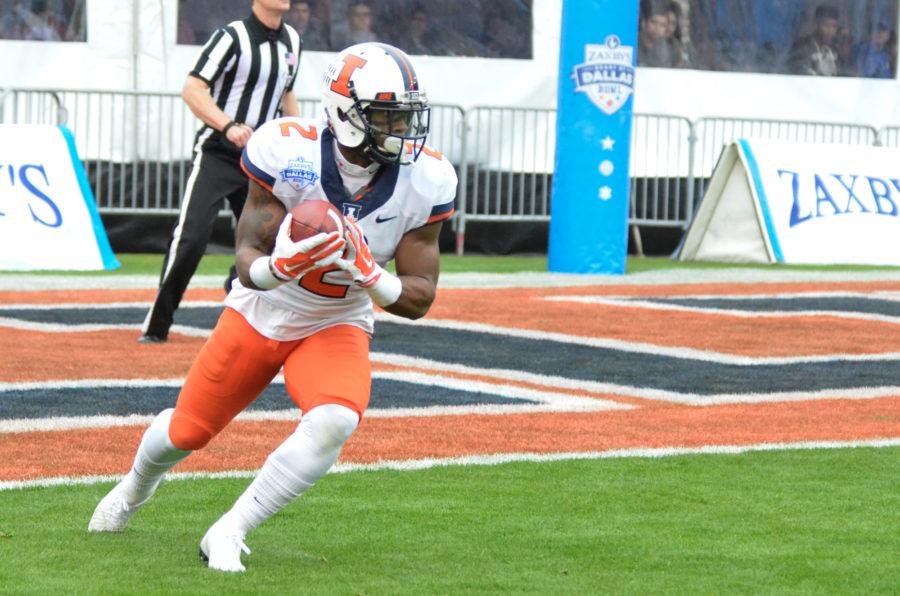 Illinois’ V’Angelo Bentley (2) returns a punt during the Zaxby’s Heart of Dallas Bowl against Louisiana Tech at Cotton Bowl Stadium in Dallas, Texas on Friday, Dec. 26, 2014. The Illini lost 35-18.

Illinois football’s bowl hopes might not have died on the sloppy grass of Soldier Field on Saturday.

The Illini may have a chance to play in the postseason for the second consecutive season because of the lack of teams in the nation with six wins. There are 44 bowl games, including the three games in the College Football Playoff, that have spot that need to be filled and the lack of six-win teams might force some bowl committees to invite teams who finished their season with a 5-7 record.

The NCAA announced on Monday that it will use each school’s academic progress rate to decide which teams will be eligible to play in a bowl game. Based on the 2013-14 ratings, Nebraska leads the group of 5-7 teams at 985, followed by Missouri and Kansas State at 976, Minnesota and San Jose State at 975 and Illinois and Rice at 973.

Illinois SID Kent Brown and the team’s Twitter account confirmed that the Illini would accept a bowl invitation. Missouri has already announced that it will decline an invitation to play in a bowl game because of its coaching transition.

Although all 11 don’t have to be filled — the Orange Bowl will be a semifinal for this year’s Playoff — a few 5-7 teams will fill some of the spots this season. Other bowls that the conference doesn’t have a sponsorship with might invite the Illini if that bowl’s partner conferences don’t have enough qualifying teams.

As of Tuesday, different projections have the Illini playing in different bowls. ESPN.com’s Brett McMurphy has Illinois playing San Jose St. in the AutoNation Cure Bowl in Orlando on Dec. 19. Sports Illustrated has the Illini in the Poinsettia Bowl on Dec. 23 in San Diego while Foxsports.com has the team playing in the Armed Forces Bowl in Fort Worth, Texas, on Dec. 29.

Of the remaining bowl games that have sponsorships with the Big Ten, Illinois could play in the Quick Lane Bowl, Music Bowl and Armed Forces Bowl.

The bowls will also depend on how many teams make it into the College Football Playoff. It’s likely that the winner of Saturday’s Big Ten Championship — Iowa or Michigan State — will be the lone Big Ten team to qualify for the Playoff. Where other teams fall depends on the independent or at-large bids given by bowls with Big Ten contracts.

A potential bowl bid will likely be met with enthusiasm by head coach Bill Cubit and the players. The team will be allowed to practice more because of the bowl, a good opportunity for the team to build its depth — something that hurt the team this season.

Aside from the revenue benefits a bowl game gives a school, it helps the coaching staff in recruiting. Cubit is already battling a difficult task with a two-year contract and the bowl appearance might help recruiting when the staff hits the road.

After their 24-14 loss to Northwestern, the Illini players were hopeful about being invited to a bowl game with a 5-7 record. Now they, and Illini fans, will need to root against South Alabama and Georgia State.