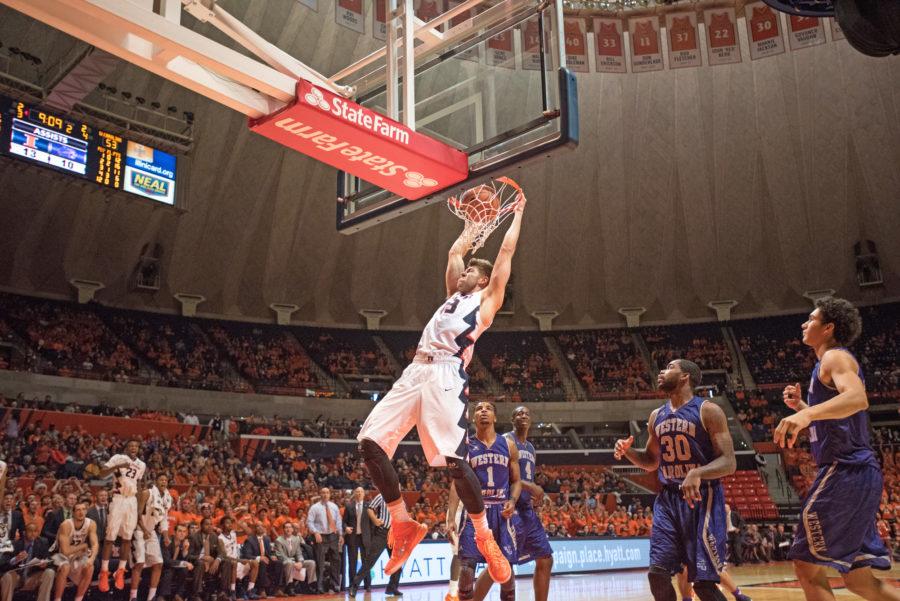 Forward Michael Finke dunks the ball during the game against Western Carolina at the State Farm Center on Saturday. Illinois won 80-68.

Kendrick Nunn inbounded the ball to Michael Finke with six minutes left in the first half against Western Carolina Saturday. Finke caught the ball between the top of the key and the right wing, a few feet from the red State Farm logo. The redshirt freshman immediately handed the rock back to Nunn, who drove to the left and hoisted a 10-foot floater, which splashed in to extend Illinois’ lead to 30-21.

The Nunn-Finke combo was on display time and again in the 80-68ch Illini win over the Catamounts. Nunn set a new personal career high in single-game points with 27, chincluding 17 in the first half and 3-of-5 shooting from beyond the arc. Finke also upped his career high with 24, including 4-of-6 from three-point land and 9-of-13 overall. Over his last three games, Finke has shot a combined 16-of-23 – a sizzling 70 percent from the field.ch

With center Mike Thorne Jr. out indefinitely due to a meniscus tear, Finke will see increased minutes at the stretch-4 position. Though the team misses Thorne’s 8.4 boards per game, Illinois did a solid job on the glass against Western Carolina. The Illini out-rebounded the Catamounts 34-21.ch

Finke (six rebounds) and Malcolm Hill (five rebounds) led the way, but it was an entire team effort.ch Every Illini player grabbed at least one defensive board.

“I thought (rebounding) was a real key to the game,” head coach John Groce said. “That’s one of the things that Coach (Larry) Hunter’s teams have always done well is attack the backboard, attack the glass. And I thought we did a great job of what we call ‘gang-rebounding.’”

Illinois hopes to carry the same intensity into Wednesday’s tilt with Yale. Scoring-wise, Nunn and Finke were the stars of Saturday’s game, but Hill remains the team’s stat sheet-stuffer. The junior guard is averaging 16.2 points 5.4 rebounds and 3.9 assists through nine outings. chHe’s also had two or more steals in four games thus far.

Freshman guard Aaron Jordan had his best game of the young season Saturday with eight points in 17 minutes off the bench.

“(Jordan) has gotten a lot better — whether it’s his efforts to watch film, his habits are getting better, he cares,” Groce said. “It all starts with his attitude — his attitude is unbelievable. He’s happy for other guys’ success, and I think when you have a free mind like that — I use Popovich’s deal a lot — when you can ‘get over yourself,’ that’s a huge thing.”

Meanwhile, forward Leron Black is still working to get back to peak shape coming off his own meniscus tear. Black has struggled in his last two outings; he shot 1-for-7 for two points against Notre Dame and 0-for-4 for 0 points against Western Carolina.

He fouled out with three minutes left in regulation versus the Catamounts.

Saturday, for the eighth time this season, Groce went with a new starting lineup. Jaylon Tate, Hill, Finke, Alex Austin and Maverick Morgan got the nod, with Nunn checking in one minute after tip-off. Groce will likely tinker with his lineup again versus Yale.