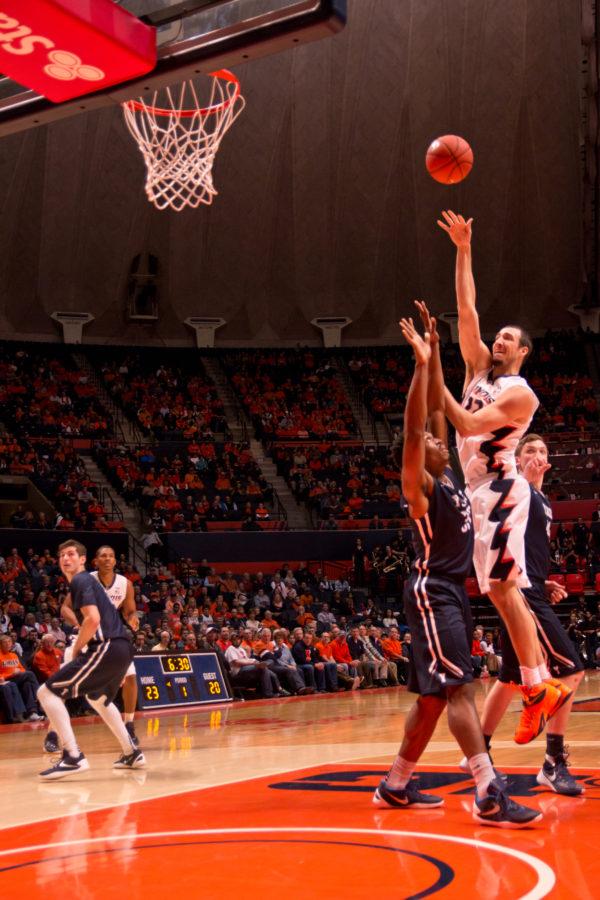 Maverick Morgan puts up a shot during Illinois' 69-65 win over Yale on Wednesday.

At times, Illinois moves the basketball and executes offensively with a refreshing fluidity.

It happened with the Illini clinging to a 63-60 lead over Yale with 1:25 remaining in the game Wednesday night.

With the shot clock winding down, the ball was kicked out to Illini point guard Jaylon Tate in the corner. Tate swung it to Malcolm Hill, who immediately dished to Kendrick Nunn at the top of the key. Nunn rose up, let it fly and watched his sixth 3-pointer of the night sail through the net.

Nunn would then ice the game at the free throw line with 1.6 seconds left for a 69-65 win over the Bulldogs (5-4), evening the Illini’s record at 5-5 on the year. Nunn finished with a game-high 28 points on the evening.

The Illinois offense looked crisp for most of the first half, as well. Yale coughed up 15 turnovers in the first 20 minutes, allowing the Illini to push the ball in transition and get the Bulldogs on their heels. Nunn and Hill relentlessly attacked the rim, racking up a combined 20 points as they took a 33-25 lead into the break.

“Nunn and Hill are tremendous players, and they should be able to compete with most anybody in the Big Ten,” Yale coach James Jones said after the game.

I don’t know if Jones laid into his team at halftime like he did during the under-four minute timeout after Yale’s 13th first-half turnover, but the Bulldogs tightened the screws in the second period. Foul trouble no longer limited reigning Ivy League Player of the Year Justin Sears, and the 6-foot-8 senior scored 17 second-half points to finish with 21 for the game.

Illinois quickly gave up a 12-2 run out of the break as the inconsistency that has plagued John Groce’s team all season crept back onto the court. The offense stalled. Shots wouldn’t fall. Illinois’ transition game vanished as Yale owned the offensive glass.

The Bulldogs pulled down 17 rebounds on their own end, taking advantage of a thin Illinois frontcourt as Leron Black missed another game due to his recovery from a torn meniscus. But Nunn and Hill wouldn’t let the Illini die.

Hill finished with 20 points, five rebounds and seven assists to rival Nunn’s 28 on 9-of-16 shooting. No other Illini finished with more than six points, but a couple Michael Finke buckets helped collapse Yale’s zone defense down the stretch.

Groce compared Illinois’ effort Wednesday to previous games against Providence and UAB, saying he felt the best about his team for a full 40 minutes after those three contests.

“You could just feel it,” Groce said. “It looked, sensed and felt like we played like a team.”

Even though the box score tells a different story on paper with Nunn and Hill scoring 70 percent of Illinois’ points, Groce is spot on. The ball movement was improved as Groce shuffled a rotation that went 10-deep. There was communication defensively. The Illini didn’t crumble when Yale came out of halftime swinging.

A four-point home win over Yale isn’t a thrilling result, but it’s certainly not a negative outcome considering where this Illini team is at right now. The Bulldogs have a good chance to make the Big Dance come March.

If you’re an Illini fan at this point, you take the win and look ahead.