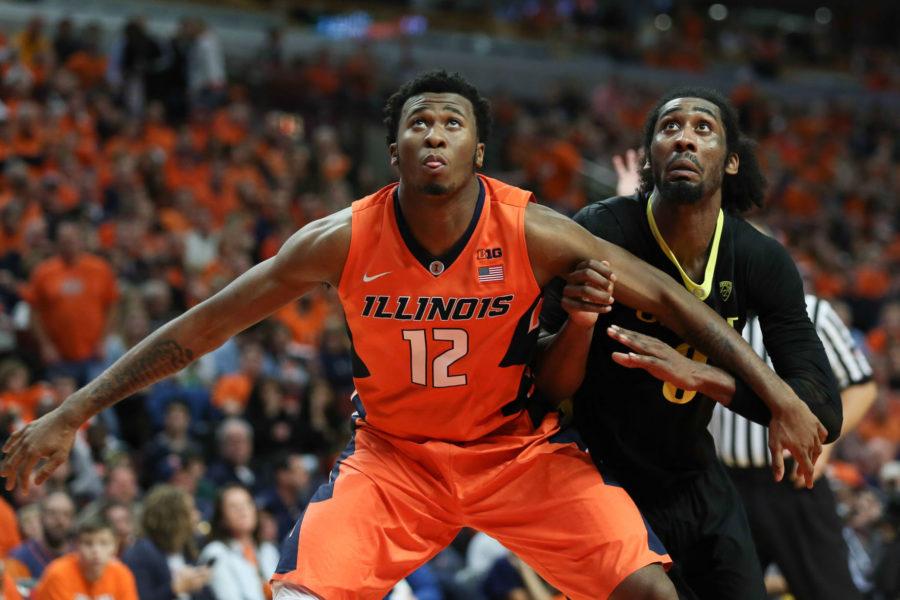 Leron Black (12) during Illinois's game against Oregon at the United Center in Chicago last season. The Illini face UIC there on Saturday with a chance to rise above .500.

United Center has historically been a friendly host for Illinois basketball (they’re 35-14 overall at the venue), but last year it was a house of horrors.

The Illini suffered two of their worst losses of last season at the House that Jordan Built. The first one, almost exactly a year ago against Oregon, was a strong indicator that head coach John Groce’s third team at Illinois had serious flaws. The second loss several months later against a mediocre Michigan squad in the Big Ten tournament sealed the Illini’s second straight NIT fate.

Each defeat left Illinois fans trudging out onto Chicago’s Madison Street feeling stunned. The Illini let the Ducks take over the game late for a 77-70 win, while the Wolverines humiliated them 73-55 with a possible NCAA tournament game on the line. Both were sorry displays in a city that has little patience for middling college teams.

Illinois’ overall performance at United Center has been trending downward since the program’s embarrassing loss to UIC in 2010. That Bruce Weber-led team was ranked No. 12 and carried high expectations, only to be knocked off by Robo Kreps and his 4-7 Flames team.

Since then, Illinois has been blown out by UNLV, then squeaked by Auburn and UIC before suffering last year’s disheartening loss to Oregon in the annual United Center game. The Auburn game was my freshman year, and I sat in a nearly-packed 300 level to watch with over 18,000 other fans. The 2013 UIC game was in front of an official crowd of 13,017, and almost exactly the same number of people witnessed last year’s Oregon loss in person.

I’d be surprised to see 7,000 people in the stands Saturday when 5-5 Illinois faces 1-5 UIC again in the final guaranteed game of a three-year agreement between the sister schools. This yearly tradition has found the depths of Chicago apathy, and won’t draw much new interest no matter the outcome of Saturday’s game.

Groce’s guys can’t worry about that. They can’t rescue the United Center game this season; that will have to be accomplished over several future successful years. But they can keep this season trending on the right track by taking care of business against UIC. The Flames are bad, and a loss to them Saturday would cement this nonconference campaign as a disaster.

A win, however, would be the Illini’s third straight and would keep them on the path to a respectable 8-5 nonconference record. While not ideal, an 8-5 mark heading into Big Ten play would be decent considering the injury adversity this team has faced in the last several months.

Forward Leron Black will likely miss his fourth game of the season while recovering from a torn meniscus !!!!(((((THIS IS WHERE THE EM DASH GOES))))!!!!  Groce didn’t seem optimistic about his chances during Friday’s press conference. That means Maverick Morgan and Michael Finke will have to step up again in his absence. As long as juniors Malcolm Hill and Kendrick Nunn don’t completely disappear, Illinois should have more than enough firepower to get past the Flames Saturday.

As it always is when they play UIC, Saturday will be a low-reward situation for the Illini. They just have to win like they’re supposed to.