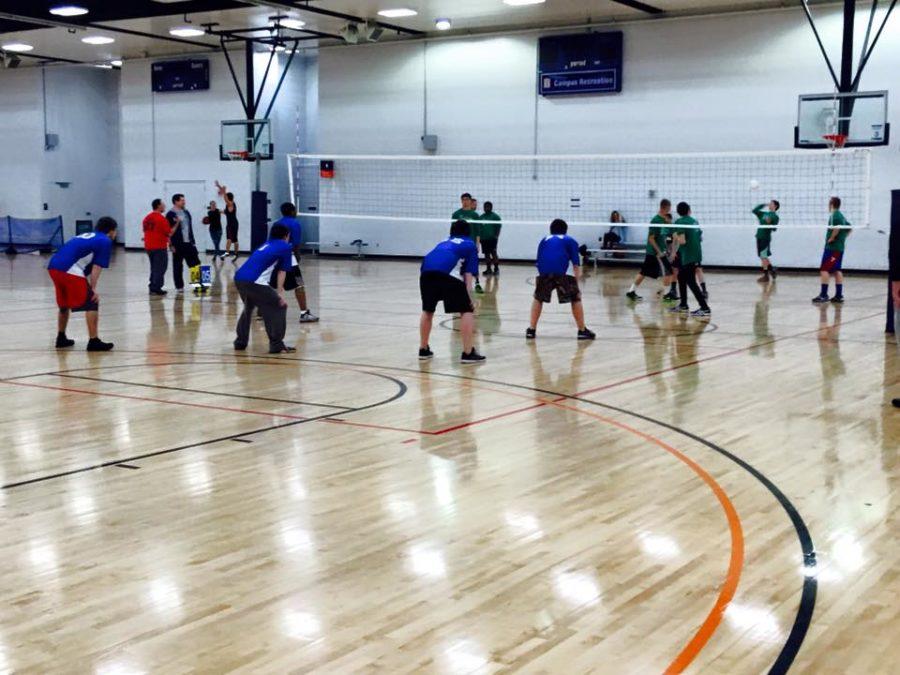 Two teams face off in the IIAA's volleyball tournament at the ARC on Saturday, Dec. 12. Photo courtesy of Tom Corr, IIAA

Play to win. Have fun. Be a good person. Hold yourself accountable.

Those were the four rules that Tom Corr, executive director of the Illinois Inter-Agency Athletic Association, said to each youth volleyball team before they faced off at the Activities and Recreation Center on Saturday.

Normally, the main goal of a volleyball tournament is to win. But in this particular tournament, Corr emphasized that the IIAA’s main goals were for participants to have fun and carry themselves in a respectful manner. There were winners and losers on the court, but for Corr and other IIAA staff members, this event was just another way for them to teach each participant lessons that go far beyond a serve or spike.

The IIAA is a not-for-profit organization that for the past 39 years has used sports as a way to bring boys and girls together. The organization teaches participants how to interact positively with their peers, and build self-esteem, among many other things.

What sets the IIAA apart from other non-for-profit youth organizations is that it gears all its programs towards children in residential treatment centers and children’s homes. These are children who do not come from healthy backgrounds, have made some mistakes, and in some cases, have simply been dealt a bad hand. Instead of giving up on these kids, the IIAA seeks to show every child that they still matter.

“All the coaches value the kids,” Corr said. “That’s important stuff for any human being to have; to have that feeling that they’re of value.”

No trophies were given out for first place, and no brackets were kept to keep track of who beat who. By the end of the event, it was hard to tell who won and who lost, as each child walked away with a medal around their neck. Teams were also awarded sportsmanship trophies.

“We won only one game,” Noah Hotchkiss of the Riverside Revolve team said. “But you know (what)? It’s alright.” Hotchkiss went on to say that regardless of wins and losses, each team encouraged one another and that he had a great time.

His teammate, Dakota Parks, also said it was a great time, but after five hours of volleyball, he mentioned that he was a bit tired from all the fun.

“This is our fifth game,” Parks said. “And I’m the person who mainly dives for the ball.”

Referees for the tournament were instructed to officiate the games very leniently, so most of the time the ball was only called dead if it hit the ground. This allowed for many participants, including Parks, to dive all over the floor trying to keep the ball alive for their team. There were not many kids who hit the ball “legally” but again, the main goal of the event was to help the participants grow as people, not as players.

“Overall, I think they did a good job,” said Rick Wallace, coach of the Onarga Academy team. “And the referees were just outstanding.”

John Fuller, coach of the Webster Cantrell Hall team, echoed his fellow coach, “I was really happy. The boys participated and tried hard.”

Over the past few years there have been many tournaments held at the ARC, and the majority are usually for RSOs. This was the first time Illinois campus recreation’s intramural department hosted an event like this, but after such a successful event Corr is confident that the IIAA will be back to use the ARC again.

Dezzion Meadly, self-proclaimed Resolve Center star, is looking forward to this next visit. Even though the tournament was not about wins and losses, he couldn’t help but let his competitive nature show.

“I could’ve helped (my team) out a lot more,” Meadly said. “But next volleyball game we play, we aren’t going to lose.”