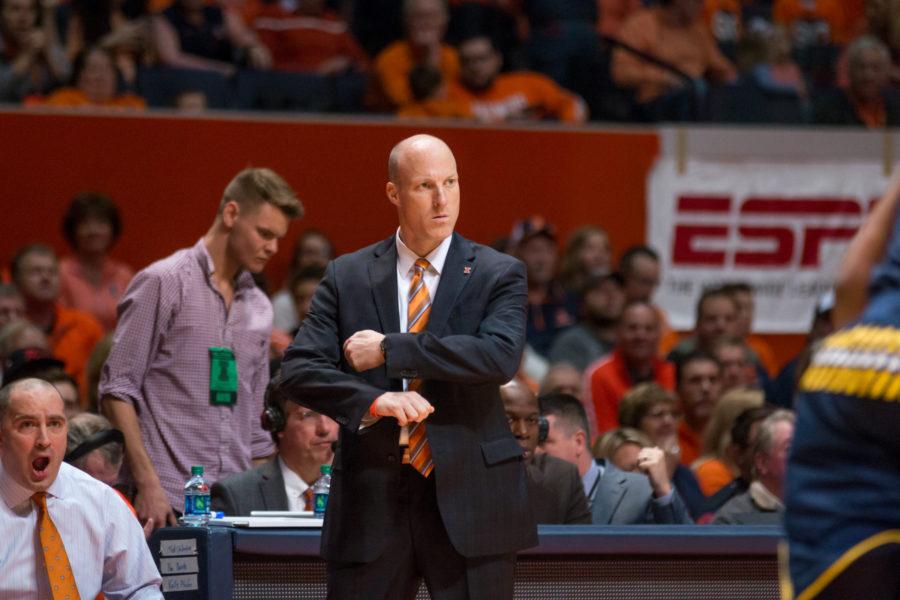 John Groce patrolling the sideline during Illinois’ 78-68 loss to Michigan at State Farm Center on Wednesday. Groce’s team fell to 0-2 in Big Ten play after losing to Ohio State on Sunday.

There are bad matchups in college basketball, and then there are catastrophic ones.

The way Illinois stacks up against No. 20 Purdue falls under the latter category.

The Boilermakers visit State Farm Center Sunday, bringing their trio of towering big men with them. At 7 feet, 260 pounds, AJ Hammons is an experienced senior that has been on NBA draft boards since he was a freshman. At 7-foot-3 and tipping the scales at nearly three bills, sophomore Isaac Haas is a muscular load and Purdue’s second-leading scorer behind Hammons. And freshman Caleb Swanigan is a rebounding machine at 6-foot-9, 260, leading the Boilers with 8.8 boards per game.

Mike Thorne Jr. and Leron Black would likely be the Illini’s starting big men at the four and five positions, but meniscus injuries have sidelined both of them for the last month. Michael Finke and Maverick Morgan are currently Illinois’ only viable options inside, and while both have contributed nicely on offense, they’ve struggled to defend the interior.

Unless head coach John Groce gets creative with a defense that has struggled to defend anybody this year, Sunday’s game has the potential to get ugly. We saw Michigan State put up 50 points in the paint against Illinois’ front line Thursday, and Purdue has the horses to top that.

Kendrick Nunn will return to the Illinois lineup after missing the Michigan State loss due to the birth of his son, so the Illini will at least get some scoring punch back. They’ll need it. Purdue is the No. 1 team in the country in opponents’ field goal percentage and defensive efficiency, according to Ken Pomeroy’s advanced college basketball rankings.

The Illini generate very few easy inside looks and will struggle shooting over Purdue’s trees, so expect them to chuck it from deep again with regularity Sunday. The two teams are nearly identical three-point shooting teams at 36 percent, but Purdue prefers to feed the post, for good reason. With Thorne Jr. and Black out, the Illini have become a much more perimeter-oriented team.

To beat the Boilers, Illinois will probably have to shoot and make a high volume of threes, but that’s only half the battle. Groce still has to figure out how to slow down Purdue’s massive front line. These guys aren’t just big bodies; they’re skilled and they can score. Purdue’s guards only account for 49 percent of the team’s scoring output, so stopping Hammons, Haas and Swanigan will be Groce’s primary concern.

With such mismatches down low, Groce will need to shuffle his defensive looks to limit the Boilermakers offensively. Mixing in some zone, traps and double-teams could keep Purdue off-balance, and the Illini will probably have to go that route. Straight man-to-man for 40 minutes won’t cut it.

Sunday is the last of Illinois’ four-game gauntlet to begin the Big Ten season, and after dropping its first three games of conference play, there’s a good chance the Illini will stumble out of the gates to an 0-4 start. The schedule does lighten considerably after Purdue leaves town, but a hole four games deep would make the season incredibly difficult to salvage.