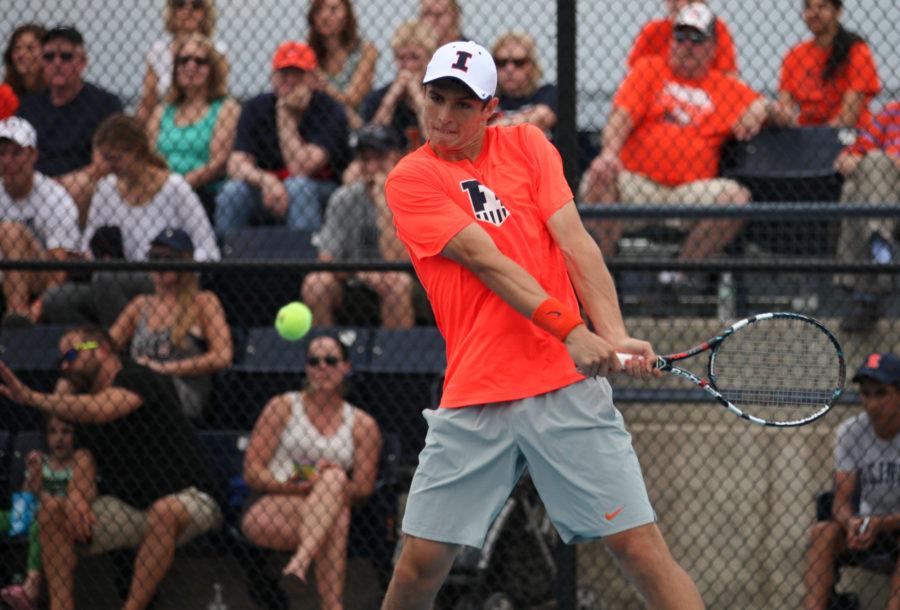 Illinois' Aleks Vukic lines up for the return during the second round of NCAA Men's Tennis Regionals v. Drake at Khan Outdoor Tennis Complex on Saturday, May 9, 2015. Illinois won 4-2.

The Illinois men’s tennis team competed at the Three Oaks Shootout tournament  — Jan. 15-17 — before it begins its spring season Friday.

The Illini competed against Mississippi State, South Florida and TCU. The tournament consisted of individual players competing to be named the Most Outstanding Player award instead of picking up a team win.

Illinois went up against the Mississippi State Bulldogs on the first day of the tournament, garnering wins in five singles matches and two doubles matches.

Leading the way for the Illini in the singles matches were senior Jared Hiltzik and sophomore Aron Hiltzik. Jared won in a three set matinee (6-3, 2-6, 7-6), using a tiebreaker to finish off his opponent in the last set. Aron completed his match in straight sets (6-2, 6-4).

Senior Brian Page teamed up with junior Julian Childers on the doubles side to defeat the team of Nuno Borges and Mate Cutura, 6-3.

The final day of the tournament included a matchup with the TCU Horned Frogs. The Illini mustered out six total wins, four from the singles draw and two from the doubles. Jared partnered with junior Alex Jesse to defeat the combination of Reese Stalder and Alex Rybakov with little difficulty, 6-2. TCU collected six wins in total as well.

On the singles side, redshirt freshman Pablo Landa turned in a successful match against Gianni Mancini, defeating him 6-4, 6-4.

The tournament concluded with multiple Illini having an above .500 record for the three matches they played over the weekend. Childers turned in a perfect 3-0 performance in singles and 2-1 in doubles and was named the tournament’s Co-Most Outstanding Player — South Florida’s Dominic Cotrone was the other.

Sophomore Aleks Vukic, freshman Asher Hirsch and both of the Hiltzik brothers went 2-1.

Jesse and Landa competed in two matches apiece and came away with 1-1 and 2-0 records, respectively.

The Illini enter the season as the No. 7 team in the country, according to the ITA rankings. The team will open up against Notre Dame at the Atkins Tennis Center on Friday for its first match of the spring season.

A previous version of this article stated that Illinois was ranked No. 6 in the ITA’s latest rankings. The Illini are actually ranked No. 7. The Daily Illini regrets this error.