Illini wrestling to face No. 1 Penn State for first time in two seasons 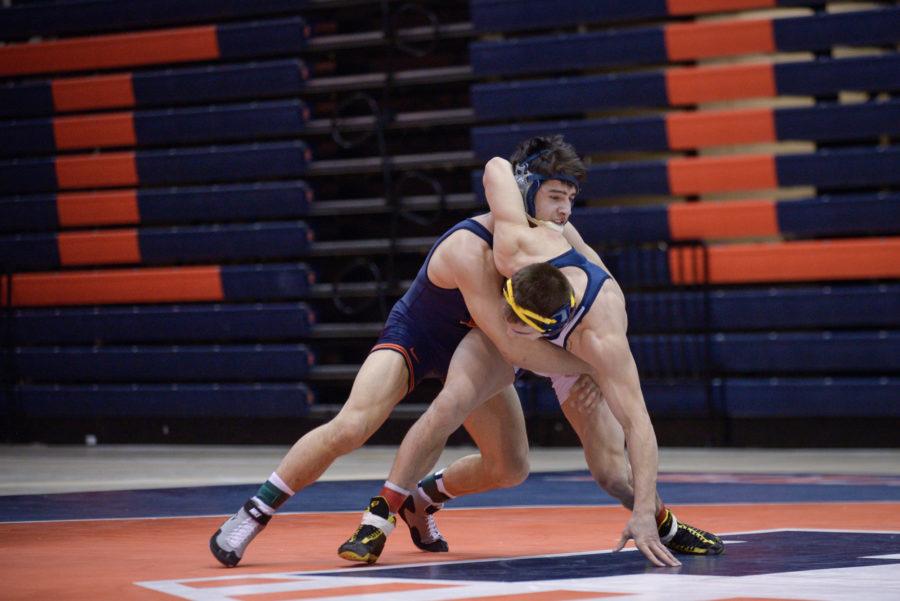 Illinois’ Isaiah Martinez attempts to press Kent State’s Ian Miller to the ground during the match at Huff Hall on Sunday, February 15, 2015.The Illini won 38-0.

Penn State enters Saturday’s matchup with six individuals ranked in the top five in their respective weight classes, including three ranked No. 1.

Under the tutelage of one of the greatest collegiate wrestlers of all-time, Head Coach Cael Sanderson, Penn State has been one of the premier wrestling schools in the country during his time in Happy Valley.

In five years at Penn State, Sanderson has a record of 71-10-1 and won four out of the last five NCAA championships.

Saturday will be a test for the Illini, who have not faced Penn State in the regular season since the 2013-2014 campaign, which the Nittany Lions won 31-3.

The Illini have not defeated the Nittany Lions since the 2007-2008 season.

Nolf is a freshman who scores a lot of points. But Martinez isn’t thinking what he can do to slow Nolf down. Instead, Martinez wants to know what Nolf can do to slow him down.

The Illini — especially Martinez — appreciated the return of No. 5 Zac Brunson at 174-pounds last Sunday against Michigan State.

“It’s not good when we have injuries,” Martinez said. “For the Ohio State dual or the Iowa dual where it was real competitive, we really could have used his points, but I’m glad he’s healthy and I’m glad he’s going to be back for this dual because it’s going to be a good one.”

Redshirt sophomore Kyle Langenderfer has a tough test on Saturday as well. At 149-pounds, Langenderfer will take on No. 1 Zain Retherford.

Retherford comes into Saturday with a 21-0 record and last beat No. 4 Jason Tsirtsis of Northwestern by major decision, 15-5.

Langenderfer (6-7) has a 1-4 record in his last five matches. He added that he’s not thinking about what his opponent is doing.

“I don’t think I need to so much worry about what he’s doing,” Langenderfer said. “As what I’m doing for my athleticism and things like that, just kind of get to my game plan more than let him to get to his, just worry about what I’m doing and get to my shots, try to put some points on the board to make it a good match and get myself in a comfortable position where I can wrestle hard the whole match.”

The Illini are coming into Saturday with not much success against the Nittany Lions in recent years, but No. 2-ranked Zane Richards said that sticking to their style of wrestling will prove to be beneficial for the Illini.

“Let us dictate where the matches take place,” Richards said. “We want to wrestle, we can’t let these guys get in the positions they want to be in.” fm