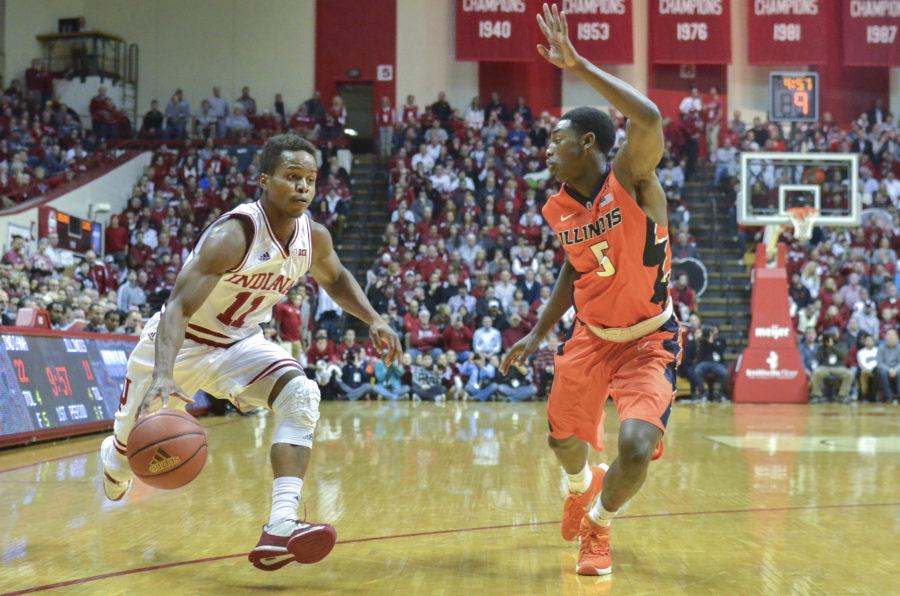 Senior guard Kevin “Yogi” Ferrell takes the ball down the court against Illinois on Tuesday at Assembly Hall. The Hoosiers won 103-69.

It feels like an eternity since 2012, when Illinois upset then-No. 1 Indiana on Tyler Griffey’s buzzer-beating layup at the old Assembly Hall in Champaign. John Groce’s signature win as Illinois head coach came with a sense of hope and promise for a struggling program.

There was no such magic for Illinois (9-10, 1-5 in Big Ten) on Tuesday night in Bloomington, where No. 25 Indiana (16-3, 6-0 in Big Ten) dominated from start to finish. The Illini were stagnant on offense and gave up easy buckets on defense. Indiana’s Yogi Ferrell, Troy Williams and Robert Johnson combined for 50 points in a 103-69 thrashing before a raucous Hoosier crowd.

Indiana had everything going – offensive boards, wide open 3-balls and transition dunks. Ferrell (16 points, 9 assists) was too quick, too nifty and too accurate on his deliveries for Illinois’ lackluster defense. Williams (21 points, 5 assists, 4 rebounds) knocked down eight of his 11 shot attempts, and Max Bielfeldt (16 points, 8 assists, 3 steals, 2 blocks) provided a big lift off the bench.

The Illini went on a 10-0 run in the first half, which cut the Hoosiers’ lead to 22-21. But Illinois scored just four points over the next seven minutes, allowing Indiana to widen the gap again and finish the half with a 42-25 lead. Tom Crean’s bunch exploded for 61 points in the second half even without star guard James Blackmon Jr., who recently underwent season-ending surgery for a knee injury he suffered in late December.

“In the second half, I thought we were atrocious defensively,” Groce said. “I didn’t think we had enough pride at that end of the floor.”

Ferrell became Indiana’s all-time assist leader with 11:20 left in the first half, passing Michael Lewis’ previous mark of 545 career dimes. The lightning-fast PG declined a ball screen and used a crossover to get to the right wing, where three orange jerseys quickly converged on the senior point guard. Ferrell then zipped a no-look pass to Bielfeldt, who laid it in for the easy deuce.

The play was a preview of what would occur throughout the game. Ferrell cut through Illinois’ porous defense like a knife through butter, finding the hot hand time and again.

The Hoosiers nailed 19 of their 36 three-point attempts. Even freshman center Thomas Bryant – whose only other made 3-ball of the season came against Creighton on Nov. 19 – cashed one from beyond the arc.

“It’s a 40-minute game, but you hate to say, you start to feel it may not be your night when Thomas Bryant makes the three from the top of the key and then Troy Williams banks two early,” Groce said.

Groce’s offense had no discernable structure or flow, Illinois’ shot selection was suspect, and there was a clear lack of movement. Malcolm Hill’s 20 points and Mike Thorne, Jr.’s return from injury were the only bright spots for the Illini.

“I thought we played too much hero ball,” Groce said. “I thought we took bad shots, and guys tried to make plays that weren’t there.”

“We’ve got guys on our team that have great character off the court,” Groce said. “But at some point, they’ve got to start to develop a basketball character.”