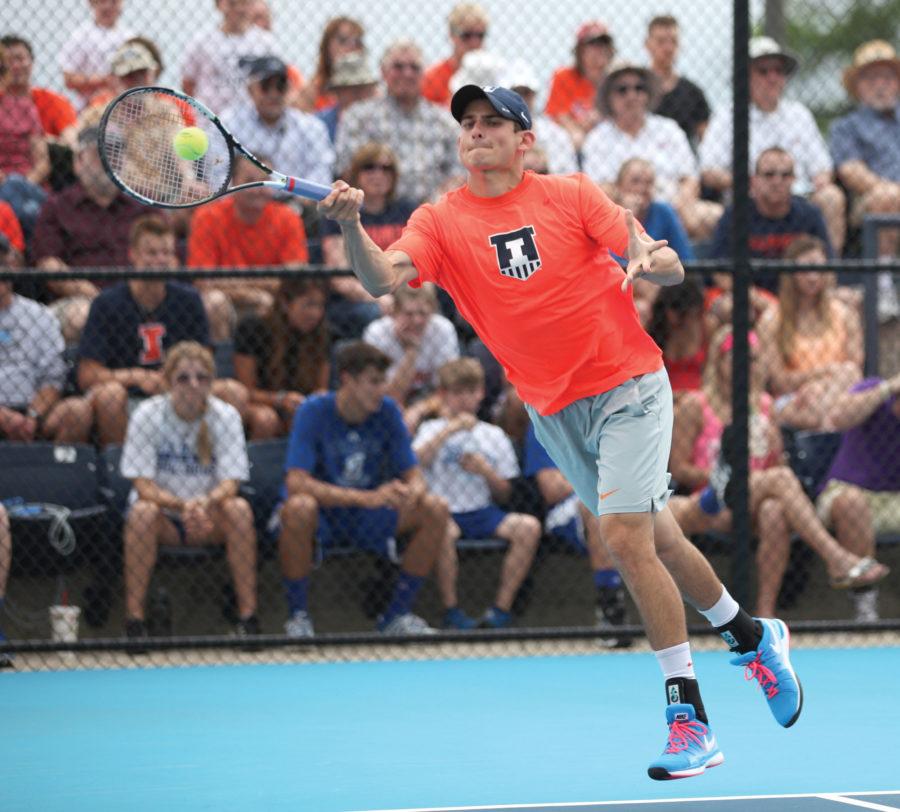 Illinois’ Jared Hiltzik swings for the ball during the second round of NCAA Men’s Tennis Regionals v. Drake at Khan Outdoor Tennis Complex on Saturday, May 9, 2015. Illinois won 4-2.

Hoping to build off a 27-5 campaign from last Spring, the Illinois men’s tennis team will return to action on Friday against Notre Dame and Valparaiso.

The Illini enter the season at No. 7 in the ITA rankings. The team was ranked as high as No. 2 in last year’s season and returns eight of its players this year.

Senior Jared Hiltzik will be leading the team on the singles side this season. Jared reached the NCAA Quarterfinals last year and earned all All-America honors for the second time.

Jared’s brother Aron and sophomore Aleks Vukic will round off the singles brigade.

Senior Brian Page will look to continue his success from last Spring. Page turned in an 8-6 record for the Illini last season after spending much of his sophomore season recovering from injury.

Sophomore Toshiki Matsuya and redshirt freshman Pablo Landa, both on the team last year, are set to return against the Fighting Irish and the pair of freshman Asher Hirsch and Pengxuan Jiang will put on their Illini uniforms to make their debuts.

Notre Dame finished last Spring with a 14-12 record, and the team is returning five of its six primary singles players from last year’s squad. The Illini will especially have their eyes on the doubles tandem of Quentin Monaghan and Alex Lawson, who are ranked No. 6 in the ITA doubles rankings.

Valparaiso will be entering Friday’s match with some momentum from last year. The Crusaders strung out 21 wins and come into this year ranked No. 1 in the Horizon League. The team is led by Jeffrey Schorsch, who compiled 28 wins over the last season.

Illinois will begin play at 10 a.m. on Friday against Valparaiso. The Illini will then face the Irish at 6 p.m.