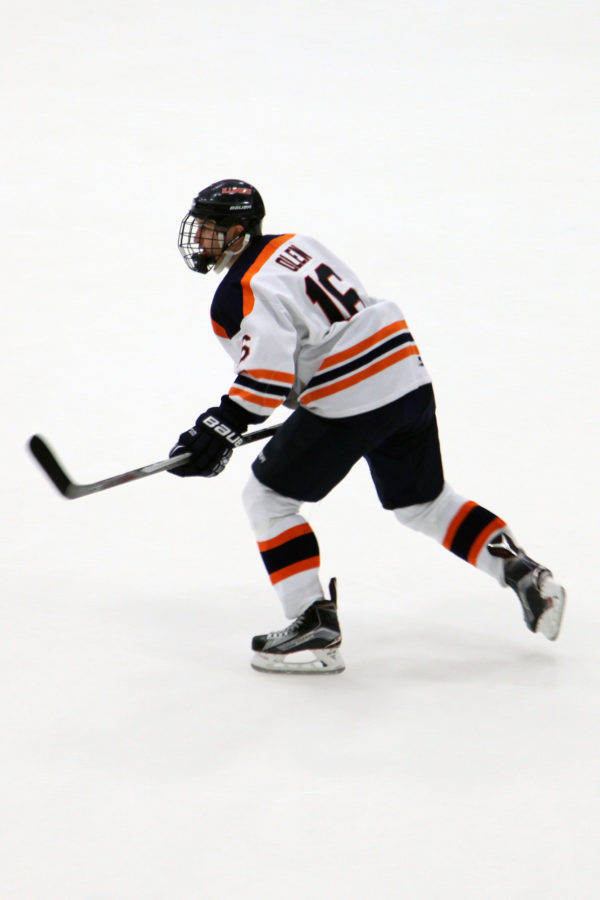 John Olen takes a shot during the game against Western Michigan University at the Ice Arena on Saturday, Dec. 11.

Even more notable, the Illini didn’t have to rely on the usual sophomore duo of Eric Cruickshank and James Mcging to carry the scoring load; seven different skaters lit the lamp for the Illini, including six goals by six different players in Friday’s matchup.

“We did a great job of just keeping things simple and getting pucks to the net,” said head coach Nick Fabbrini. “Even the defense chipped in a little, when you get production from up and down the lineup, you’re going to be tough to beat.”

In Friday’s series opener, Illinois quickly made fans forget about its recent offensive woes, jumping out to a 3-0 lead after first-period goals from the familiar faces of Mcging and Cruickshank along with forward Yoshi Shibata.

Rochester made a surge in the second period, scoring two goals while holding the Illini scoreless.

However, the Illini would unleash another trio of goals sparked by defenseman Austin Zima’s score just two minutes into the third period. Chris Lozinak and Eric Saulters followed up with two power-play goals off Rochester minor penalties to give Illinois its eventual 6-3 win.

A large part of Illinois’ scoring frenzy was the long-awaited result of the line change that moved John Olen with Mcging on the first line and Cruickshank and Grant Stueve to the second line.

“When John was out and Cruickshank was playing with Mcging and Stueve, I thought that was one of the best lines in the country,” Fabbrini said. “It’s great having your best players be your best players, but we need other guys to chip in night after night and moving those guys around allows us to do that.”

Saturday’s victory was characterized by a stellar performance from both Mcging and the Illini defense.

Goals by Olen and Cruickshank gave Illinois a 2-1 lead going into the second period, but then, Mcging took over.

The rest of the Illini skaters couldn’t stay out of the penalty box, registering 14 penalty minutes and giving the Warriors six power play opportunities. Zev Grumet-Morris and the Illinois defense shut down Rochester’s offense in every man-down situation. Grumet-Morris recorded 39 saves over the weekend filling in for Joe Olen, who sat out the series for resting purposes.

“It’s great knowing we have two guys that can be solid for us in net,” Cruickshank said. “It’s a major confident booster knowing anyone we have back there is going to give it their all.”

A second-period Rochester goal and a third-period goal from Tyler Opilka rounded out the scoring for the game, giving the Illini a 5-2 win and the series sweep.

Although the Illini are out of the CSCHL regular season title race, they can still win the conference tournament. If this weekend was any indicator of what fans can expect to see for the final two months of the season, then a tournament run is very probable for the Illini.

“We’re trying to put ourselves in the best position possible for the tournament,” Fabbrini said. “Our most important game of the season is now the next game every time.”