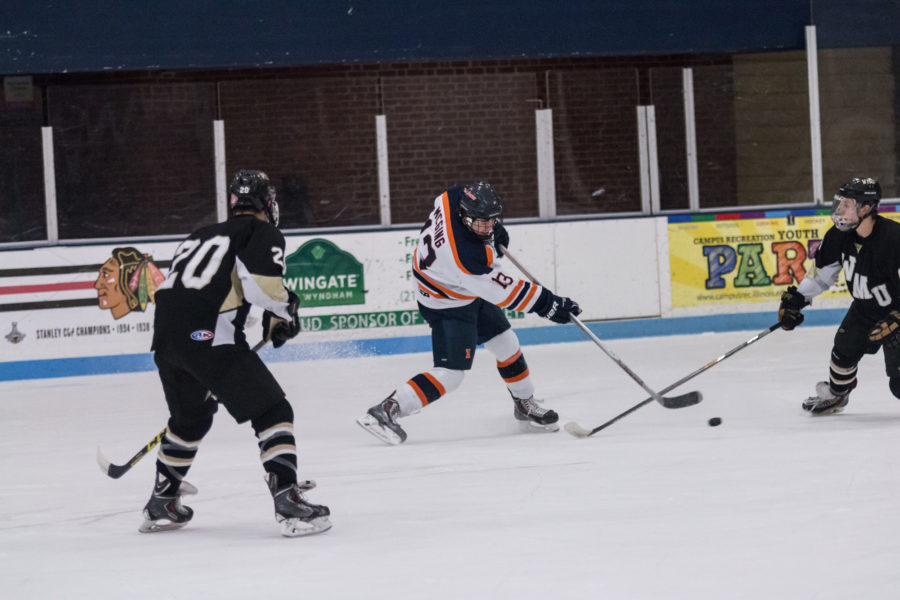 Illinois' James Mcging (13) fights for puck during the game against Western Michigan University at the Ice Arena on Saturday, Dec. 12, 2015. Illinois won 4-3.

A tall task lies ahead this weekend for the Illinois hockey team.

The No. 15 Illini will meet the Lindenwood Lions on Friday night for their first opportunity to knock off a No. 1 ranked team in the nation. Lindenwood jumped two spots to hold the top ranking after sweeping Oklahoma last week.

Even though the Lions bring a five-game win streak into the matchup, they aren’t the only team on a roll.

The Illini are coming off one of their more impressive showings of the season, dismantling the Rochester Warriors 6-3 and 5-2 in their home matchups Jan. 22-23. The Illini offensive outburst came largely at the hands of sophomore James Mcging, who tallied seven points on the weekend with three goals and four assists.

Despite the fact that the No. 20 Rochester Warriors were a much weaker defensive unit, Illini head coach Nick Fabbrini says that his squad can keep up it’s offensive production.

“We’re not going to get as many chances as we did against Rochester, but, that being said, I still think we are going to get ours,” Fabbrini said. “It will just be a matter of bearing down and finishing and capitalizing on those chances.”

This won’t be the first meeting of the season between Illinois and Lindenwood — the two faced off in November in Wentzville, Missouri, when the Lions took down the Illini by scores of 3-2 and 8-0 in the two-game series.

Fabbrini has high expectations going into this weekend’s matchup and says his team should be able to keep things tight against a strong Lindenwood squad, as it did on the Friday night game in November.

“We went toe-to-toe with them for 60 minutes, and they scored in the final minute when we played them down there,” Fabbrini said. “We know that we are more than capable of beating them if we play a good game and it will be a key for us to limit our mistakes.”

The Illini game plan will certainly involve getting their offense going at the level it performed at against Rochester. Mcging says having some fresh faces in new spots helped shake up the offense and could be a difference maker this weekend.

“We shuffled our lines a little (last week) and we got some guys back from injury that definitely helped,” Mcging said. “Although I think we have to realize Lindenwood is a completely different team and that these games won’t nearly be easy as last weekend.”

The Illini enter the weekend’s matchup with a 15-10-3 record, while the Lions sport an 18-7-0 record coming into the contest. Although out of the CSCHL regular season title race, Illinois could be in prime position for a run at the conference tournament. Wins against Lindenwood and upsetting the No. 1 ranked team would certainly set a strong foundation for that goal.