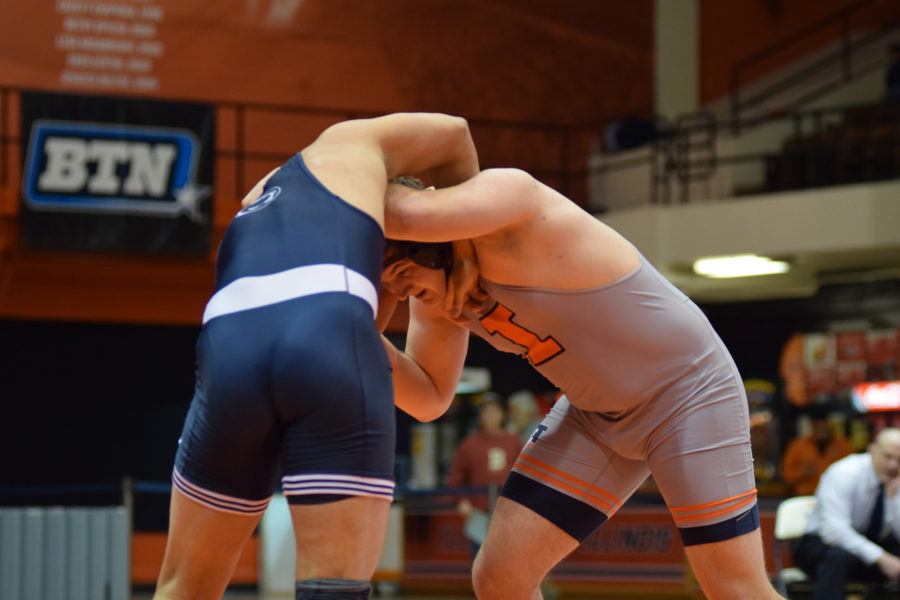 With four duals remaining before the Big Ten Championships, No. 13 Illinois wrestling currently boasts a 10-4 record on the season with a 1-4 mark in the conference.

All four of the Illini’s losses come against teams currently ranked in the top-10 of the USA Today/NWCA Coaches rankings, with the latest blow coming against No. 1 Penn State last Saturday.

Illinois will travel to Madison, Wisconsin, to take on Wisconsin Sunday. The Badgers received four votes in Tuesday’s rankings with a record of 1-4 and 0-3 in the Big Ten.

Wisconsin hasn’t competed in more than two weeks — its previously scheduled duals against No. 12 Rutgers and Maryland were postponed due to superstorm Jonas.

Last season, the Illini defeated the Badgers in Champaign, 20-15, and come into Sunday with two wrestlers ranked in the top-20 in their respective weight classes.

At 133 pounds, Wisconsin’s Ryan Taylor enters Sunday’s contest ranked No. 7 with a 1-2 record on the season. He will square up with No. 2 Zane Richards of Illinois.

This season, Richards said he is a much different competitor and wrestling at a “very high level,” — he has a 19-0 record this season.

Richards said that to come away with his 20th win of the season on Sunday, he will have to wrestle at a consistent level throughout the match.

“(I have to) just wrestle consistent with my training and through my practices,” Richards said. “It’s another match. You want to exact revenge, but at the end of the day it’s a wrestling match and I got to go out there and whoop some dude’s (butt). It’s plain and simple what you got to do.”

Richards is a coming off a win against No. 5 Jordan Conaway of Penn State last Saturday by decision, 8-2.

At heavyweight, Brooks Black comes into the season with a 14-5 record and will face 11-9 Brock Horwath of the Badgers.

Black is coming off a 6-2 victory over Jan Johnson of Penn State, but said that he could have done more over the course of the match.

“I think I started off pretty strong,” Black said. “I didn’t go after as many attacks that I would like to of. It’s a good win, but it’s not where I want to be yet. I want to be at the top and I really got to get my offense going more.”

Black said he didn’t know all that much about Horwath, except for that fact that he is big, and underhooks a lot in his matches.

Illini head coach Jim Heffernan said that Wisconsin is a tough team and that the record is not indicative of how it has competed throughout the season.

“They’re good, they’re competitive, it’s a good conference,” Heffernan said. “If you lose a match during the course of a dual that you’re not supposed to, you’re going to have a hard time winning and they matchup good with us actually so it’ll be a dogfight.”