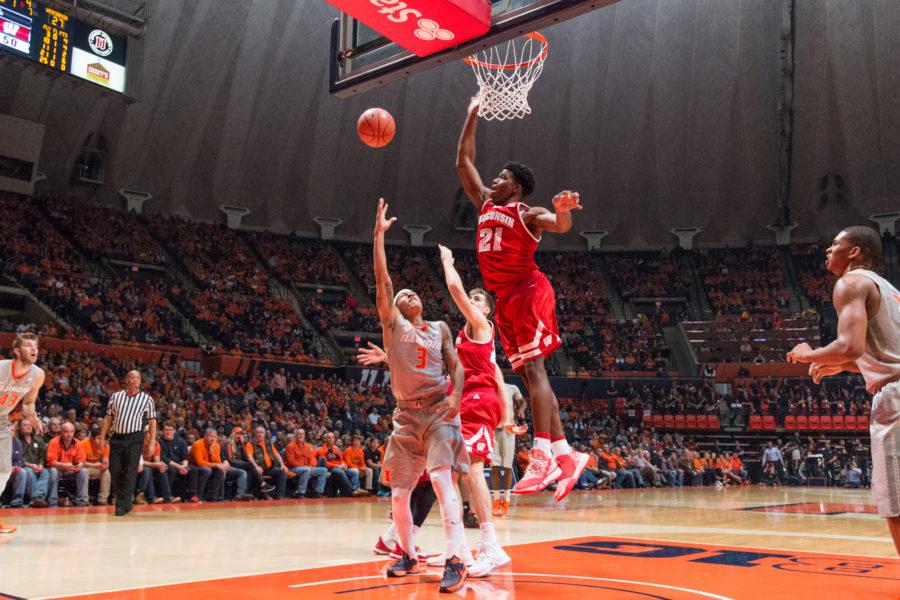 There are several adjectives you could use to describe Illinois’ 63-55 loss to Wisconsin Sunday at State Farm Center, and none of them are flattering to the home team.

Lethargic, sluggish and lifeless are a few descriptors that immediately come to mind.

It was a truly unremarkable contest from the 10-minute mark of the first half to the final buzzer, as Illinois’ early 18-10 lead began to evaporate. The Badgers (13-9, 5-4 Big Ten) went ahead for good five minutes before halftime and stifled any Illini comeback attempts the rest of the way.

This latest loss for Illinois (10-12, 2-7 Big Ten) resembled Thursday’s loss to Ohio State, minus the Illini’s thrilling comeback to force overtime against the Buckeyes. Illinois got off to a fast start in that one too, only to suffer anemic scoring droughts that were repeated Sunday against another middle-of-the-pack, red-and-white Big Ten team.

Wisconsin’s complete dominance over Illinois this decade was extended Sunday, as Illini head coach John Groce fell to 0-6 against the Badgers. The Illini haven’t beaten Bucky since Jan. 2011.

It’s not that the Illini players weren’t trying out there, but the effort they showed didn’t translate to any semblance of good basketball on the court. Their half-court sets were often unimaginative, going through only one or two offensive progressions before hoisting contested, low-percentage shots. This Illinois team plays an isolation-heavy brand of hoops on a regular basis, but relied on the iso a lot on Sunday, even by Illini standards.

“I do think there were a couple times when we took some early (shots) and fell for (Wisconsin’s) bait,” Illinois head coach John Groce said after the game.

Illinois shot just 36 percent for the game and were 8-for-25 from the field in the second half.

It’s hard to get anything going offensively when the point guard position is such a black hole of production like it was Sunday evening. Illinois’ starting point guard Jaylon Tate and backup Khalid Lewis combined for zero points and four assists in 40 minutes of playing time. That’s an astoundingly low output from arguably the most important position on the floor and nearly impossible for any team to overcome.

The Badgers also out-scored the Illini 22-8 in the paint. No individual Badgers were especially dominant — Nigel Hayes led them with 17 points — but as a unit they were able to grind out an ugly win in typical Wisconsin fashion.

Illinois’ most memorable moment of the game was an unfortunate one. Redshirt freshman Michael Finke suffered a knee contusion as he tried to draw a charge on Hayes, staying on the hardwood for a couple of minutes before limping gingerly off the court. With Leron Black and Mike Thorne Jr. still sidelined with meniscus injuries, losing Finke would be the latest devastating blow to Groce’s already-thin roster. If Finke misses extended time, junior center Maverick Morgan would be the Illini’s only healthy true big man.

Sunday’s loss to the Badgers isn’t really significant for an Illini team in the midst of a nightmare season with minimal hope of playing any postseason games, but it encapsulated what 2015-16 Illinois basketball has become: Unexciting and difficult to watch. There was poor execution on the floor as fans in the stands groaned and lost interest in a product that was once a point of pride.

Injuries to Finke and Kendrick Nunn — who suffered a minor hip contusion in the second half —make the grim metaphor complete.

In a season that many fans would love to forget, Sunday’s loss to Wisconsin was the most forgettable one yet.