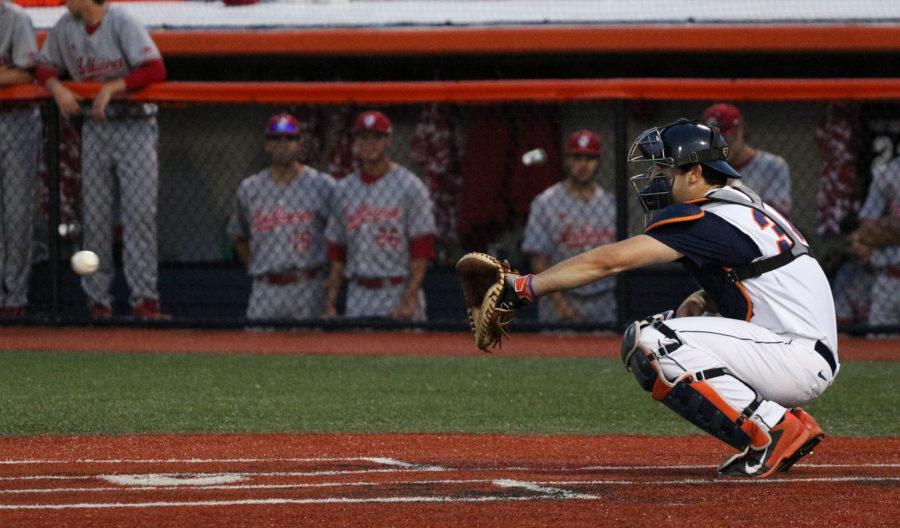 Illinois’ Jason Goldstein (34) warms up before the start of the inning during the baseball game v. Indiana at Illinois Field on Friday, Apr. 17, 2015. Illinois won 5-1.

Tweet: “It is a goal of ours to win a national championship.” – @IlliniBaseball coach Dan Hartleb.

Losing those players was by no means a dagger to the program. Eleven were seniors. The other two — left-handed pitchers Tyler Jay and Kevin Duchene — were the only two non-seniors to leave the program.SO

Hartleb, foreseeing the departure of his veteran players, signed 13 players to his 2015 recruiting class. Tack on redshirt freshmen Ryan Haff and Quentin Sefcik, and Hartleb has 15 new players to field this season.SO

While there was a lot of turnover for the Illini this season, Hartleb’s expectations for the program have not changed. The Illini threw themselves into the national spotlight last year, and Hartleb said that it’s now this team’s job to keep them there.

“The first meeting I told the team that there is an expectation for us
to win, and it is a goal of ours to win a national championship,” Hartleb said. “I don’t think you obtain those goals unless it’s something you think about, dream about and talk about.”

Goldstein returns to his place behind the plate

But Goldstein knew that he was going to stay at Illinois before the Dodgers drafted him.

Nine Illini, including Goldstein, were drafted.SO Goldstein and shortstop Adam Walton were the only players who decided to forgo the MLB to return to Illinois.

Goldstein was one of the Illini’s bigger bats last season, finishing third on the team in both RBIs (47) and slugging percentage (.476).SO

But Goldstein’s experience behind the dish will be just as valuable as his experience in the batter’s box. He played in 59 of the Illini’s 61 games last season, and started in 57 of them. SO

Hartley said Illinois’ young pitching staff will benefit greatly from having a veteran catcher to throw to.

“It is really nice to have (Goldstein) back with the young pitching staff,” Hartleb said. “Any time you have experience in their with past success it is a positive. We put a lot on our catchers from calling games to being a leader. It is nice to have.”

Sedlock has big shoes to fill

After losing Duchene and Jay to the MLB last season, Illinois will turn to right-handed pitcher Cody Sedlock to play a much bigger role in its 2016 campaign.

As a sophomore, Sedlock appeared in 21 games and had a 4.01 ERA. SOThis season, Hartleb sees him as a guy who has as good, if not better, stuff as Duchene and Jay.

“He has made some major adjustments over the off-season, and has really improved from last year.” Hartleb said. “(Sedlock) has always had great arm strength and great stuff, but his location and his angles were very average, and he would get hit hard a lot.”

Hartleb said that Sedlock’s improvement in his command and his swing-and-miss ability has been “unbelievable,”  and that Sedlock will have a great opportunity to be a high draft pick.

Over the summer, Sedlock played with the Bourne Braves of the Cape Cod League — the country’s top college summer league — and finished with 26 strikeouts and a 3.41 ERA over 29 innings.SO