No. 5 Iowa cruises past Illinois basketball, 77-65 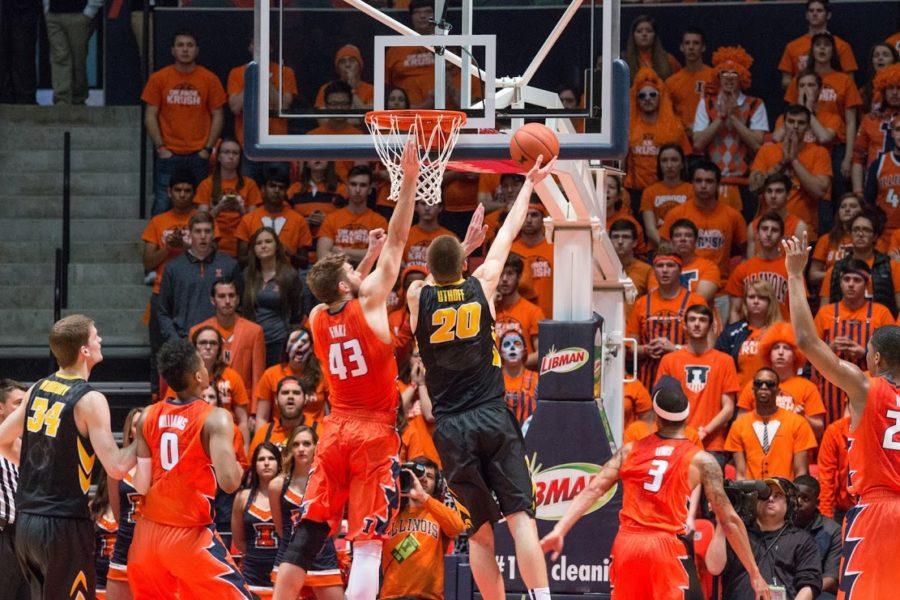 In 2013, a sea of orange stormed the Assembly Hall court after Tyler Griffey’s layup lifted Illinois over then-No. 1 Indiana. Three years later, Orange Krush was hoping for a similar outcome against another top-five opponent. But there would be no halfcourt celebration Sunday against Iowa, who got its 10th conference win, 77-65.

The home team didn’t let it get out of hand during the first 20 minutes. Despite shooting 11-for-32 from the field including several blown layups, the Illini entered the halftime tunnel trailing by single digits, 38-29.

Illinois couldn’t muster the same kind of fight in the second half.

Iowa head coach Fran McCaffrey runs a tight ship. His players know exactly where they’re supposed to be on the court at all times — whether it’s a halfcourt set, an inbounds play or a zone D —and it was evident Sunday. Meanwhile, Illinois continues to have miscommunications with only a month remaining in the season.

Jok was a pest on defense, disrupting passing lanes and ballhawking Illinois’ Malcolm Hill and Kendrick Nunn. Offensively, the 6-foot-6 junior used his strength and athleticism to get to the cup with ease. The Sudan native, who counts Luol Deng and the late Manute Bol as relatives (per his HawkeyeSports.com bio), has steadily improved his play throughout his junior season.

“He’s playing with a tremendous amount of confidence. He’s a much more complete player,” Iowa coach Fran McCaffrey said. “The steal he made in the second half was a big-time momentum shift. When he was young, he made some mistakes. And he’s not doing that anymore. I’m really proud of him.”

Uthoff is a 6-foot-9 shooter, penetrator and board-getter with arms like tentacles, which allow him to block jump shots and shield the ball on drives to the hoop. Prior to Sunday’s game, he was averaging 18.4 points and 6.2 rebounds per game. He’s a sneaky player who racks up stats without much flash or pizzazz.

And he may earn some Wooden Award attention with the way he’s playing. He certainly looked like a Player of the Year candidate Sunday against Illinois.

“Coming off the bench, you get to evaluate what the team needs,” Williams said. “My number was called, I know my role and I think I did a great job. I wanted to bring as much energy as possible.”

Next up for Illinois is a Saturday game at Northwestern (16-8, 4-7 Big Ten). Head coach John Groce has six days to prepare his team for the Wildcats.

“We had some communication errors that we need to clean up,” Groce said. “Rebounding was an issue. We’ve got to block out better. We’ve got to pursue balls better. At the end of the day, what hurt us most defensively was (Iowa’s) transition game, and then the rebounding.”