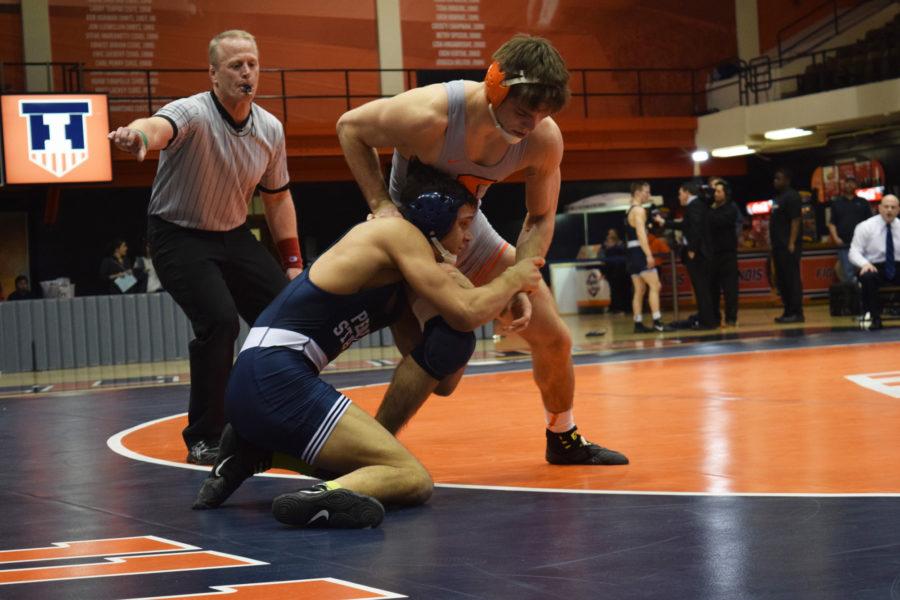 Friday marks the Illinois wrestling team’s final dual meet of the season. Illinois will take on No. 18 Minnesota at Huff Hall.

Minnesota (9-7, 5-3) is coming off back-to-back road wins, winning four out of the last five, with its lone defeat in the last five competitions coming on the road against Iowa. The Golden Gophers have not competed at Williams Arena since Jan. 24.

Last year, Minnesota defeated Illinois in Minneapolis, 20-19. The Illini have dropped their last five meetings against the Golden Gophers and have not defeated Minnesota since the 2007-2008 season.

Senior Steven Rodrigues said he doesn’t think he’ll be emotional, referring to this part of the season as “the fun part.”

“The Big Ten (tournament) and nationals are basically what you put your whole life into,” Rodrigues said. “I have three events left and then I get to wrestle in the national tournament in my hometown, so I can’t really ask for anything more than that.”

At 165 pounds, Rodrigues is ranked No. 4 in his weight class and will wrestle Brandon Krone, Brad Dolezal or Dylan Urbach of the Gophers — all of who have dual experience this season.

Minnesota has three wrestlers ranked in the top 20 in their respective weight classes.

The 141-pound Tommy Thorn is ranked No. 6, with a 28-6 record on the campaign and is on a five-match winning streak.

Brett Pfarr is ranked third at 197 pounds with a 29-2 record. Pfarr’s only two losses on the season have come to No. 2 and No. 1 in the rankings, respectively.

Michael Kroells rounds out the ranked Gophers at heavyweight. Kroells has a record of 27-6 on the season and is 5-2 in his Big Ten matches.

Illinois head coach Jim Heffernan said Minnesota is just one team of many in the conference that is tough to beat every season.

“They’re always tough and they’re always in shape,” Heffernan said. “They’ve been really relevant for the national championship for the last 10 year, so they’re good.”

Senior Jeff Kopeke is coming off a 24-9 victory over Regis Durbin of Northwestern, and said for his last match at Huff Hall, he is just trying to “put on a show and have fun.”

Koepke has won five out of his last six matches on the season.

Rodrigues added that his time at Illinois has been based on nothing but commitment and hard work to get to the level that he is at.

“Just being here and the level of commitment you got to put in to be successful is more mental than anything,” Rodrigues said. “I never achieved what I wanted and still haven’t got what I wanted yet… and now it’s time to go get what I deserve.”