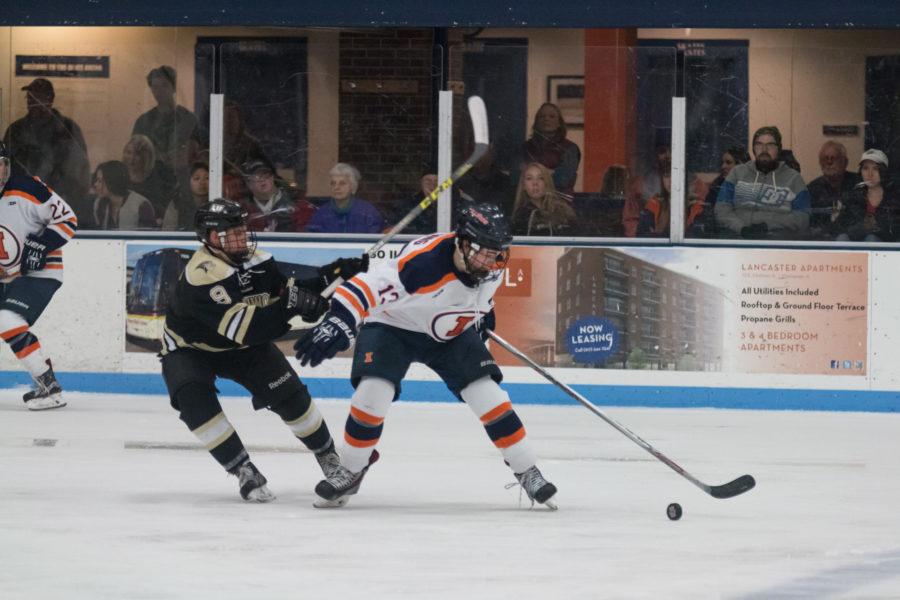 Illinois’ James Mcging fights off a defender during the game against Lindenwold University at the Ice Arena on Saturday, January 30. The Illini lost 4-1.

Tweet: [email protected] takes on Robert Morris University Friday in the opening round of the CSCHL tournament in Ames, Iowa.

While Illinois is still looking for resume-building wins to potentially qualify for the ACHA national tournament in March, its position in the CSCHL tournament was decided nearly two weeks ago at the conclusion of conference play.

Scoring 17 points in conference play has forced the Illini to miss a first-round bye for the second season in a row, and being able to avoid an extra game with any CSCHL opponent — who all rank in the ACHA top-25 – is a substantial advantage.

“Winning the CSCHL championship is one of our goals, and that’s a lot easier not having to play a tough game on Friday,” head coach Nick Fabbrini said. “Every game you play in this conference is tough and it grinds you down.”

Despite finishing last in the CSCHL, Robert Morris is no team to overlook and matches up quite evenly with Illinois.

Both teams are relatively weak on the road. The Illini are 3-8-1 away from Illinois Ice Arena, scoring only 30 goals on the road while giving up 54. The Eagles have almost identical numbers: holding a 5-8-1 road record while netting 33 goals and allowing 45.

Illinois is 2-2 against Robert Morris this season, splitting each two-game series with the Eagles.

“They have a really good power play,” sophomore forward James Mcging said. “They had a lot of penalty goals against us last time we played them and have a lot of talented guys who can move the puck around. We haven’t seen them in a long time, but I think we match up well.”

The last time the Illini took on the Eagles was Dec. 5 — a series in which just one goal separated the two teams in each game.

However, a lot has changed in the Illini roster and starting lineup since the New Year.

Since moving senior John Olen to the starting line after returning from a broken ankle suffered in October, Illinois’ offense has been extremely productive — scoring 34 goals in the team’s last eight games.

Last weekend, the first line duo of Olen and Mcging accounted for seven goals and three assists while each earned his first career hat trick.

“It’s good to see John (Olen) score all these goals like he used to,” Mcging said. “So hopefully that’s back to stay for the playoffs.”

The Illini have also improved on defense, denying every single power play opportunity against Illinois State last weekend and have held opponents to two goals or less in seven of their last 12 games.

Illinois will have a rested goalie in Joe Olen this weekend, who did not see action against the Redbirds. Having a goalie with 741 saves and a .926 save percentage definitely won’t hurt the Illini Friday.

“We’ve beaten every team in the tournament at least once,” Fabbrini said. “We’ve got four lines of guys who can go; we’re not going to have everybody we want, but I think every team can say the same. We feel like we can play with anybody when we’re on our game, we’re more than capable of putting three games together and going home with the trophy.”