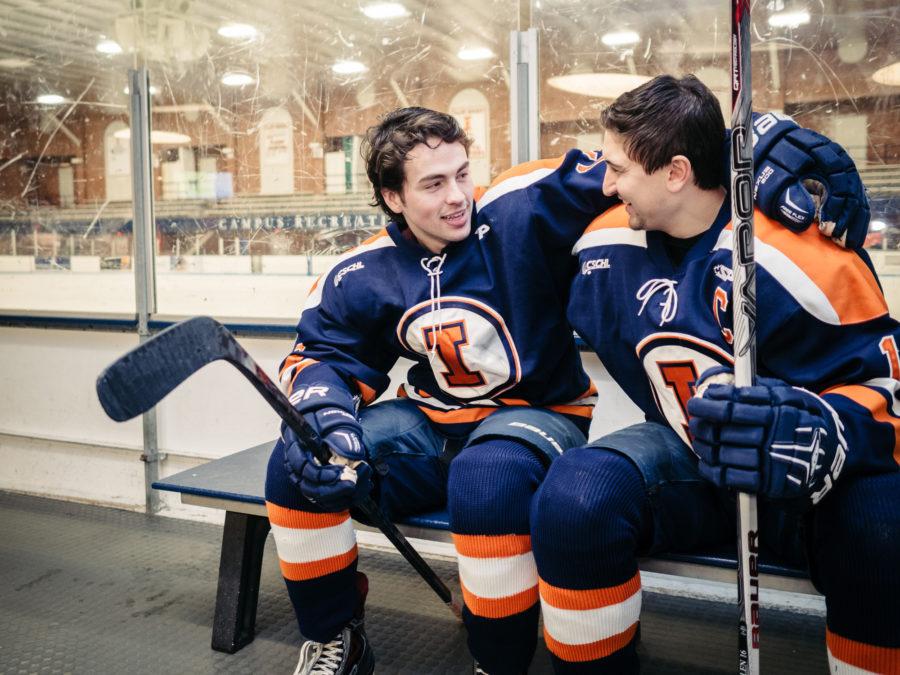 Last weekend had all the right conditions for the perfect Illinois offensive storm.

Only one ranking point outside the field of 20 qualifying teams for the ACHA national tournament entering last Friday, the Illini needed a substantial goal differential to win a potential tiebreaker — if the Illini were to move up in the standings.

The opponent was in-state rival Illinois State, who embarrassed Illinois in its last meeting Oct. 31 in route to a 7-1 victory — leaving the Illini eager to avenge arguably their worst loss of the season.

The Redbirds were caught chirping early and often last weekend, acquiring 66 penalty minutes over the two games and giving the Illini a plethora of power play opportunities.

As a result, lightning struck twice at Illinois ice arena last weekend in the form of consecutive hat tricks from senior John Olen on Friday and sophomore James Mcging on Saturday — the first time in Illinois hockey history.

“I’ve definitely never seen something like that since I’ve been coaching here,” head coach Nick Fabbrini said. “But for two line mates to do it on consecutive nights, I think says a lot about how well these guys are playing and how well they complement each other.”

Although each hat trick was a result of the same line and against the same team, each reflects two very different seasons and careers for the respective players who accomplished the feat. Between the six goals by two players in two games, Illini fans saw a flash of the past as well as a glimpse of the future for Illini hockey.

In Friday’s 5-2 win, the man with the captain’s patch, Olen, was the talk of the game.

Olen got the Illini offense started early, netting the first goal of the series just five minutes into Friday’s game. In the second period, Olen deferred to his teammates: running the point on the power play and tallying an assist to his line mate Mcging.

Clinging to a mere one goal lead heading into the third period, Olen put the team on his back in the final 20 minutes. The senior scored Illinois’ final two goals to put the game out of reach and record the first hat trick of his career.

“I hadn’t had a goal in a couple games,” Olen said. “I was seeing the ice well. I thought I had a couple of opportunities early and they just started dropping. I was just trying to lead by example for some of the younger guys and push us forward hoping to get us a bid in the national tournament.”

After sitting out nearly two months with a broken ankle early in the season, the coaching staff and Olen believe last Friday is proof he has finally gotten back to full strength and confidence.

As the Illini’s point leader last season, Olen has been a staple of Illinois’ offense since he arrived on campus. Even in the midst of an injury-ridden season, Olen’s tallied 20 points — ranking No. 4 on the team.

“He’s probably been our best player since he got here as a freshman,” Fabbrini said. “Even when he first came back, he didn’t really look like himself. To get him back and going … it’s a huge boost for us.”

On Saturday, McGing dazzled Illini fans with yet another impressive offensive display.

After a quiet first period, the puck seemed to find McGing’s stick nearly every possession.

Six minutes into the second period, a shot block near the Illinois blue line sent McGing on a breakaway. The sophomore forward made the goaltender look amateur, deking the defender then sneaking a backhand goal past the sprawled out Redbird goalie.

McGing would go on to score the final two goals for the Illini, which featured an unassisted breakaway in the third period to make the score 6-1 and give him his first ever hat trick.

“We were lacking a lot of scoring power with Cruickshank and Pal out,” McGing said. “So maybe subconsciously I knew I had to step up. It was a fun weekend.”

McGing’s hat trick seemed appropriate for the type of season he’s having.

McGing leads the Illini with 30 assists and is in the midst of an eight game point streak dating back to Jan. 22.

“He’s having an unbelievable season,” Fabbrini said. “I think he’s been one of the best players I’ve seen in the league this year, he creates opportunities for himself and his teammates every time he’s out on the ice.”

While Illini fans can be excited knowing Olen is back to his vintage form and McGing promises a bright future for the program, both coaches and teammates are just happy they have both players in the present. Heading into the final month of the season and entering tournament play, the Illini need their two stars more than ever.