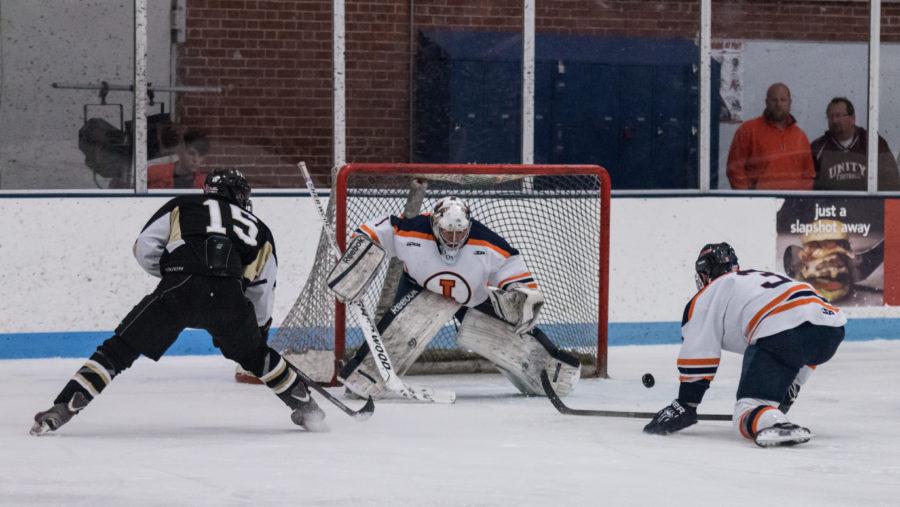 Tweet: [email protected] is able to boast the regular season MVP and two other skaters to first team all-conference after a bad loss in the CSCHL tournament.

Robert Morris University knocked out the Illini in the first round of the CSCHL tournament in Ames, Iowa. The Eagles turned the tables on the Illini by beating them at their own game: having a star goalie and forward carry the team late.

Forward Chris Pontello — the tournament’s most valuable player — led Robert Morris in the offensive zone. His second-period goal gave the Eagle’s their first lead of the night at 2-1. The Eagles would eventually go on to win 4-1.

Illinois point leader James Mcging couldn’t spark the Illini’s offense and carry the scoring burden like he had done so many times before. The sophomore forward finished with no points, snapping an eight-game point streak dating back to Jan. 22 over which he tallied 19 points.

“We were thoroughly outplayed in the second and third periods and never got back to playing our game,” head coach Nick Fabbrini said. “I think (Robert Morris) wanted it more. It was an overall lack of energy and passion needed to win a playoff game.”

Despite a poor showing in the tournament, the Illini were well represented in the conference’s regular-season awards handed out after the championship game — including the most prestigious title the league offers.

Illinois goalie Joe Olen was named CSCHL regular-season MVP. Olen was credited with 10 of the Illini’s 18 wins. He kept Illinois afloat in the ACHA standings after Illinois’ offensive production took a dive when his brother John was sidelined for about two months after breaking his ankle in October.

The junior’s 741 saves, 2.67 goals allowed per game and .926 save percentage rank in the ACHA top-25 — impressive numbers considering his defense gives up nearly 35 shots on goal a game.

Olen’s signature CSCHL moment this season came on Oct. 23-24 against Ohio University. He denied all 42 of the then-No. 2 in the nation Bobcats’ shots on goal in the first game, then followed with a 48 save performance in the series finale. Illinois won game one 2-0, but fell in a shootout the following night.

“I can’t say enough about him,” Fabbrini said. “He gives us a chance to win every time he’s in net. To us, he means everything; he’s been our best player, and I think the best player in the league and country. I’m glad the other coaches agreed.”

Despite a relatively disappointing season based on certain players’ accolades, Illinois fans can look forward to seeing that talent for years to come.

Freshman defenseman Tyler Opilka earned CSCHL all-rookie and all-defensive team honors last weekend — one of the lone bright spots in an Illinois defensive zone that was ridden with injuries this season.

Opilka was fifth on the team in points with 18, and his 17 assists ranks second behind Mcging.

“He’s been outstanding for us,” Fabbrini said. “He plays in all situations and runs our first power play unit. It’s easy to tell he’s played at a high level of hockey for a long time, he gets the game and what we’re trying to do here.”

Along with Olen, Mcging was also named first team all-CSCHL, and and was a top candidate for conference MVP.

The sophomore forward led the Illini in every major offensive category besides goals this season. His 48 points and 30 assists are both atop the CSCHL and rank in the ACHA top-15.

Almost two weeks ago, Mcging recorded his first career hat trick against Illinois State — giving him team highs for goals, assists and points in a game.

“Knowing that some of our best players have a couple years left here is exciting for a coaching staff,” Fabbrini said. “It gives us something to look forward too next year.”