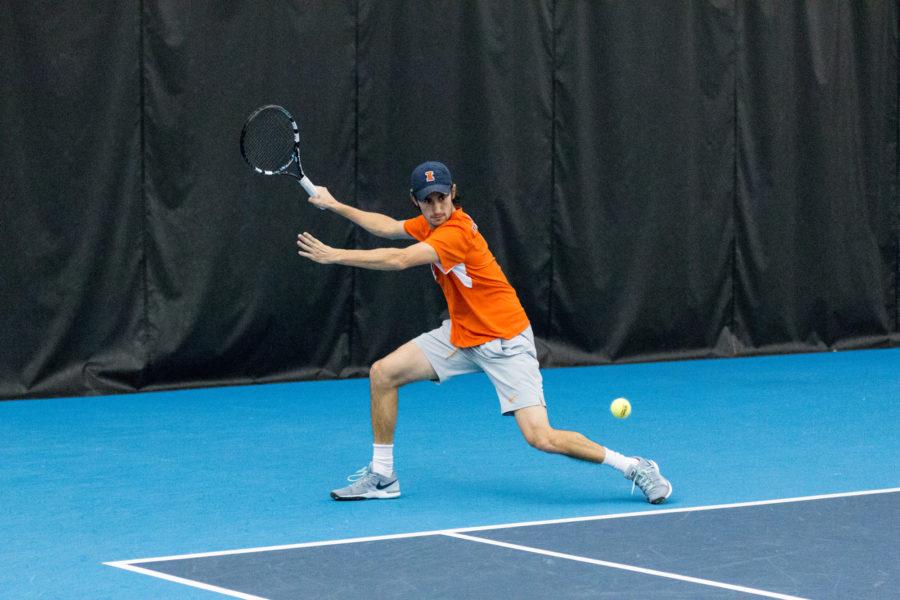 Illinois' Alex Jesse lines up the ball during the match against Notre Dame at the Atkins Tennis Center on Friday, February 5. The Illini won 5-2.

Head coach Brad Dancer did something he rarely does after the Illinois men’s tennis team’s loss on Saturday.

He addressed them in the Atkins Tennis Center locker room after the match — something he normally does not do. Normally when home matches end, the players shower and get treatment, and then go home.

After his team opened with great energy and urgency in the doubles matches, the Illini came out flat and lacked the championship mentality that Dancer wanted to see in singles, losing 4-2 to No. 7 Texas A&M.

“I wanted to tell our guys that we have to change our mentality if we want to compete with the better teams,” Dancer said. “I’m not taking anything away from A&M though, they played very well.”

Sophomore Aleks Vukic said that Dancer’s point was clear and reached all of the players on the team.

“I feel as though this loss was a wakeup call for us, especially at home,” Vukic said. “I feel like this will be a great learning curve for the team.”

The team will try to put Dancer’s message into action Saturday, when the Illini take on No. 2 Virginia. The Cavaliers enter the match with an 8-1 record, with their only loss coming to the No. 1 North Carolina.

The Cavaliers have five nationally ranked players, with three in the top 30. Thai-Son Kwiatkowski comes in at No. 3 in the rankings and will take on either No. 9 Vukic or No. 11 Jared Hiltzik.

The Illini moved up one spot in the ITA National Team rankings to No. 11, despite the Texas A&M loss last weekend.

Illinois’ competition will not get much easier on Sunday, when it will go up against No. 8 TCU.

All eight of TCU’s matches this year have been against ranked opponents. The Horned Frogs have managed to come out on top in six of them, losing only to Virginia and No. 12 California.

The Illini dropped a 4-0 decision to TCU in the first round of the ITA Indoor Championship on Feb. 12.

Illinois men’s tennis’ hope to return from injury this weekend

Redshirt junior Alex Jesse is on track to return to match play this weekend.

Dancer said Jesse has dealt with some foot irritation for the past two weeks and decided to keep him out. Dancer expects him to be back at full strength heading into the weekend.

Jesse said that plantar fasciitis has kept him on the sidelines for the past few matches. He tried multiple ways to relieve the pain: taking time off, icing, stretching, soft tissue work and other methods but none of the treatments were working the way he would have liked.

He noted that this was the first time he sustained this type of injury and decided to try a cortisone shot. Jesse said his foot is feeling better post-shot and he’s ready to get back onto the court.

Jesse had a 2-1 record with two unfinished matches in singles and a 1-5 record in doubles before injuring his foot.

“With how much I still prepared mentally while I was out, I don’t expect any rust to show this weekend,” Jesse said. “I’ll always be ready to go.”