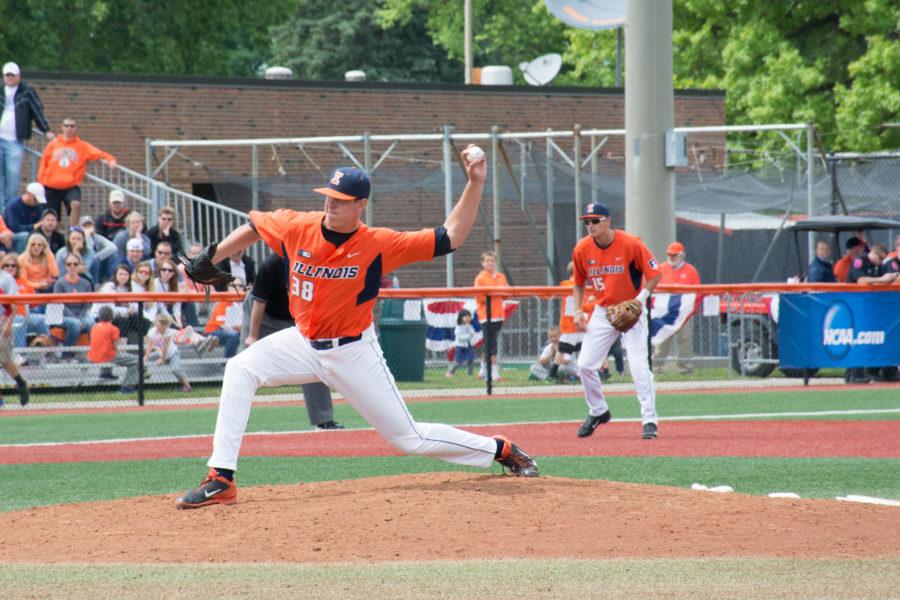 The Illinois baseball team was down 1-0 against Tulane on Sunday when head coach Dan Hartleb CHpulled starting pitcher Andrew Mamlic with two outs in the bottom of the sixth inning.

Hartleb called on senior left-handed pitcher J.D. Nielsen chto work a lefty-lefty matchup. Nielsen continued to work his way through the No. 19 Tulane lineup for two more innings, giving up one run on two hits.

By the bottom of the ninth, the Illini had taken a 5-2 lead, setting up senior RHP Nick Blackburnch to take over for Nielsen and pick up the save. Blackburn needed only nine pitches to shut down the Green Waves, securing an Illini win.

Illinois opponents will get used to seeing that Nielsen-Blackburn one-two punch.

Illini pitching coach Drew Dickinsonch said Nielsen and Blackburn will be coming out of the bullpen all season, but the two are interchangeable between the closer and setup man roles.

“Neither one is a starting role guy,” Dickinson said. “They are it. Our season goes as those guys in the back of our bullpen. When it hits the main stage, it’s definitely those two guys. It’s great to have two seniors who have been in the thick of it and have that experience.”

Blackburn has fit into a bullpen role since he was a freshman. Blackburn made six starts during his first year in an Illinois jersey, but Dickinson said he didn’t have the arm to eat up innings.

Blackburn would start off throwing in the low 90’s his freshman year, but after a few innings he’d be sitting in the mid-80’s.

Before the 2015 season, the Illini coaching staff changed Nielsen’s arm slot. He now throws a submarine-style pitch — a mechanical change has given the Illini bullpen a new weapon.

“No left-hander can hit J.D. It’s impossible,” Dickinson said. “The guy gave up two hits last year in like 50 at bats against lefties last season.”

Having a LHP and RHP at the backend of the bullpen can give Dickinson a strategic edge against opposing hitters.

“When J.D. comes into the game in the seventh or eighth inning, they will pinch hit all of their right handers for their left handers, and he will still get them out,” Blackburn said. “Then when I come into the game in the ninth, I face all righties, which I am a little bit more comfortable with.”

Blackburn said it is nice to have somebody that can pick him up if he is having an off day, and vice versa. He struggled in Friday’s game, giving up four runs and the game to Tulane in the bottom of the 10th.

Dickinson saw Sunday’s game as teaching moment for the rest of his bullpen, and Blackburn was his example.

“The best thing for me as a pitching coach is if you have a bad game the best thing to do is to get back out there immediately,” Dickinson said. “And to put him back out there in the same scenario, up 5-2 in a close out situation — it was almost déjà vu-ish — it tells my bullpen that just because you have a bad game doesn’t mean you’re being shut down.”

Nielsen and Blackburn will be Illinois’ go-to guys at the end of the game all season. Dickinson will decide which one closes out games on a game-to-game basis, which Blackburn does not mind.

“It is fine by me,” Blackburn said. “We have nine innings of baseball to get through. It doesn’t really matter who pitches when. It is one big job for the whole staff.”