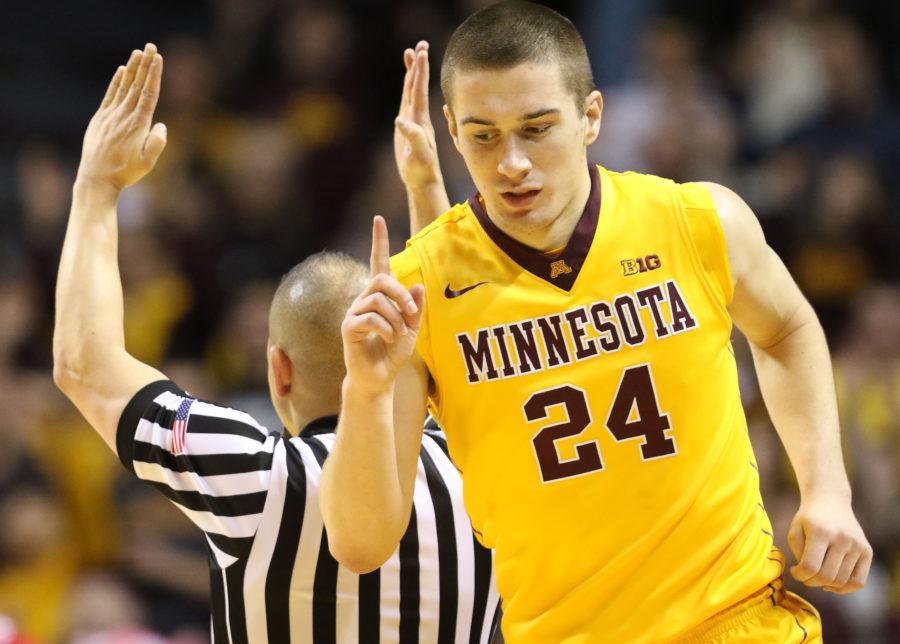 Minnesota’s Joey King (24) signals after hitting a 3-point shot during the first half against Indiana on Saturday, Jan. 16, 2016, at Williams Arena in Minneapolis. Indiana won, 70-63. (David Joles/Minneapolis Star Tribune/TNS)

Editor’s note: The Daily Illini sat down with Ben Gotz, the sports editor of the Minnesota Daily, the student newspaper at Minnesota and talked about Illinois, Minnesota and how Sunday’s game might go.

The Daily Illini: With Joey King in tears postgame, it was obviously an emotional victory, but just how huge was it for Minnesota to be able to upset Maryland and finally crack the win column?

Ben Gotz: I think Joey King’s postgame reaction really showed how much of a toll the 14-game losing streak (and 0-13 start to conference play) took on the team.

There was a lot of relief and joy coming out of Williams Arena after the Maryland game, because while the Gophers looked better the last few weeks they still had nothing to show for it until that night.

The team was expected to struggle during a rebuilding year in 2015-16, but I think it became very hard for fans to buy into the future with the present going so poorly.

Now the Gophers can hold their heads up a little higher on campus and point to something tangible to say they’re improving.

DI: Only five of the Gophers’ conference losses have been by 10 points or more. Is this team any better than their record indicates?

BG: This is a tricky question. It’s possible Minnesota’s a little better but not by a lot.

One of the reasons the Gophers have so many close losses is they’re bad in a lot of areas that count at the end of games.

One of the biggest things is that the team does not shoot free throws well, and there’s been a few games this year it has let slip away at the line.

DI: It took an overtime period, but Illinois escaped Minnesota with a win the first time these teams met. What does Minnesota have to do to get their revenge in Champaign on Sunday?

BG: The first matchup on Jan. 23 was definitely one of those games I was just talking about. Minnesota lost it in large part at the line, going 6-for-12 in the game.

Missed free throws were part of the team’s utter collapse at the end, with Illinois going on a 16-0 run from the last two minutes of regulation through overtime.

The Gophers were 20-for-23 on free throw attempts against Maryland and if the team wants to keep winning it needs to keep making free throws.

DI: Illinois and Minnesota both rely on plenty of underclassmen on a nightly basis — how have Minnesota’s young guys like Mason and Murphy developed, even in a lost season?

BG: Richard Pitino has to be pretty thankful Shaka Smart left for Texas, because that allowed the Gophers to scoop up Murphy, a former VCU commit.

The freshman forward looks like he could be a big part of the team’s future, averaging 11.1 points and 7.8 rebounds (sixth in the Big Ten) per game.

He’s the team’s worst free throw shooter and could add a few more moves under the basket, but his raw athleticism and ability was one of the few things Minnesota fans could get excited about for a while.

Mason’s improvement has been a lot more quiet, but his numbers are up across the board and he’s been the one leading the team in Big Ten play.

His confidence really seems to be growing.