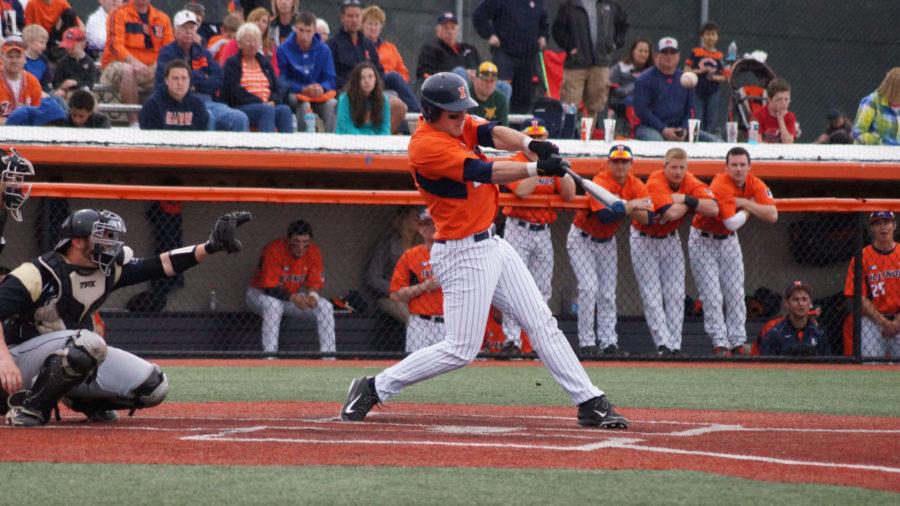 The hits came early and often for both teams
during the Illinois baseball team’s Friday matchup against Florida Gulf Coast
University.

The Illini (2-2) recorded six hits and two
runs in the first five innings under the lights in Fort Meyers, Florida, on their
way to a 4-2 win over the Eagles. The Eagles (1-4) kept pace kept pace through
five, posting the exact same line of six hits and two runs.

But once the sixth inning started, the game
belonged to the Illini. Catcher Jason Goldstein lead off the frame with a
double, and freshman Doran Turchin brought him home on
a fielder’s choice.

Turchin played the best game of his young
career as an Illini, going 3-for-4 on the night. The outfielder had two RBIs and one run.

“(Turchin) did a good job. He swung the
bat really well,” head coach Dan Hartleb said. “He used the entire field,
and I was pleased with his base running. It was a very solid performance.”

Starter Cody Sedlock kept the Eagles at bay
for seven innings. Hartleb’s ace threw 113 pitches, giving up seven hits and
two runs, and relied on his defense more than he did last week against Tulane.

Sedlock racked up 10 strikeouts in his first
start in New Orleans. He struck out four against the Eagles. The Illini
defense turned three double plays to get Sedlock out of
three separate jams.

“I was pleased with the way he competed,”
Hartleb said. “Last week he did great job of commanding his breaking ball.
But this week he didn’t have that, so he had to pitch with his fast ball most
of the game. But he competed very well (despite that).”

Sedlock’s solid start left the
door open for Illinois’ bullpen to slam shut. Hartleb only needed to use one of his bullpen
arms to shut that door.

The left-handed side-armer J.D. Nielsen
took the mound in the eighth and immediately clipped the Eagles’ wings. Nielsen
needed only 12 pitches to strike out the side and end the inning.

Nielsen pitched so well in the eighth that
Hartleb decided to leave his reliever out there to close out the game.

“He was really sharp,” Hartleb
said. “We had Nick (Blackburn) playing catch, but when we saw
the dominant play from Nielsen we knew (Nielsen) was the guy to roll back out
there.”

Nielsen needed only seven more pitches to
close out the Eagles. The Illini defense converted a double play off a soft
grounder to short to end the game.

Hartleb will hand the ball over to sophomore
Doug Hayes on Saturday, who will make his second career start.