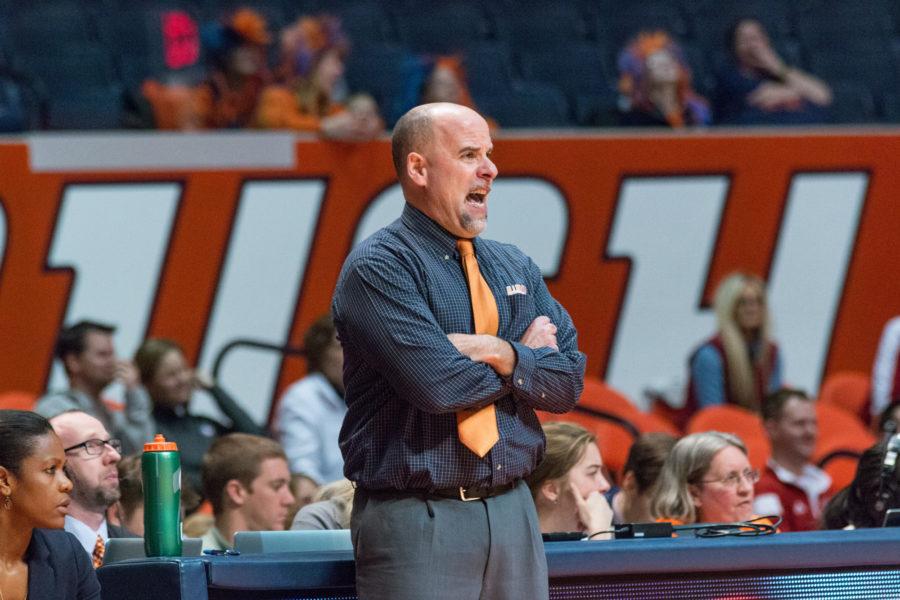 Illinois head coach Matt Bollant shouts instructions at his team during the game against Indiana at the State Farm Center on Feb. 10. The Illini lost 80-68.

Late in the fourth quarter, the Illinois women’s basketball team’s comeback was within one point of ending its tumultuous season on a high note, but once again fell short of a win.

In the fourth quarter, Illinois went on one of its best runs of the season, and outscored the Hawkeyes 19-6. Iowa’s six points were just enough to keep Illinois at bay as it went on to win the game, 61-56.

“I was really proud of the fourth quarter,” head coach Matt Bollant said. “We started in the third quarter and played great, and cut it to the three. We did not finish the quarter. They finished on like a 10-0 run. It would be easy for us to hang our heads and we didn’t.”

The Illinois comeback was led by center Chatrice White, who put up 29 points and 11 rebounds in 38 minutes of play. It was the sophomore’s 18th double-double of the season.

White jumpstarted the team’s comeback by scoring 11 of her 29 points in the fourth quarter. After the game, Bollant praised her leadership in helping the team close the large deficit.

“Chatrice took over in the fourth quarter. Our guards did a good job of getting her the ball,” Bollant said. “I thought Chatrice was fantastic in getting us back in this game and she showed a lot of heart and a lot of passion.”

Guard Kyley Simmons was the second-highest scorer for the Illini — she notched 11 points and added six rebounds and four assists. The senior, who grew up near Iowa, said before the game she was looking forward to ending her last collegiate regular season game in front of her family and friends.

With the loss, Illinois will finish the regular season in last place in the Big Ten and are slated to play Penn State in the 11 seed-14 seed game in the Big Ten Tournament on Wednesday. Bollant was optimistic following Saturday’s loss that the team was able to generate momentum heading into tournament.

“Hopefully this will give us confidence,” Bollant said. “The way we played in the fourth quarter – if you can play like that, you can play with anybody. A good Penn State team is playing well, and I think we are going to play them first. We’ll start there and see what we can do.”