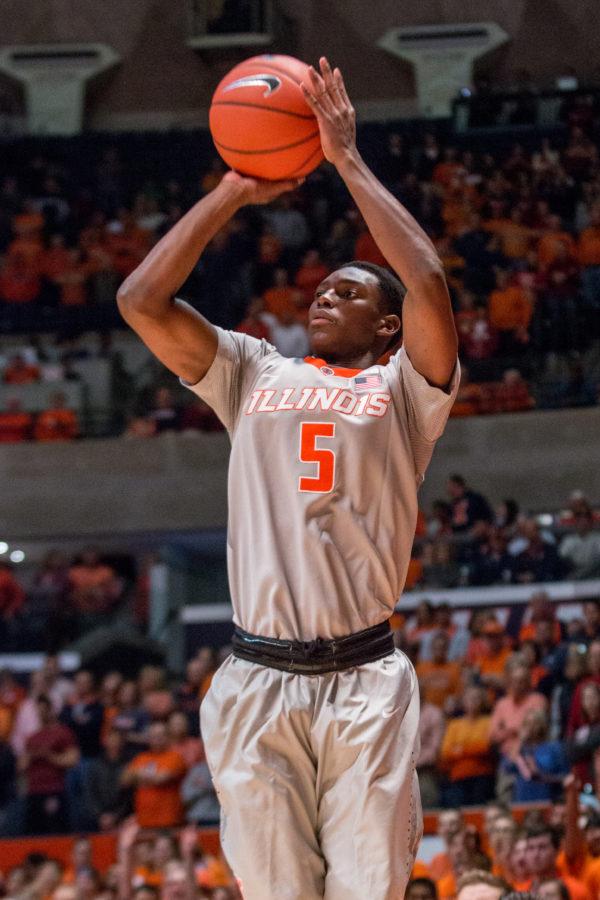 Illinois’ Jalen Coleman-Lands shoots a three during the game against Indiana at the State Farm Center on February 25. The Illini lost 74-47.

Then, John Groce’s bunch went on to beat the short-handed Golden Gophers in commanding fashion, 84-71JT. The third bit of good news arrived Monday morning, when the Big Ten announced Jalen Coleman-Lands earned Freshman of the Week honors for his hot shooting against Indiana and Minnesota.JT

Coleman-Lands is one of the bright spots in a lost season for the Illini (13-16, 5-11 Big Ten),JT who have suffered numerous injuries and suspensions. The La Lumière product nailed four of his five 3-pointers versus Minnesota in the first 20 minutes.

He would’ve had a chance at breaking his career-high of 26 points if he hadn’t gotten into foul trouble early in the second half.

Sunday was senior night for Khalid Lewis, Mike LaTulip and Mike Thorne Jr. Lewis’ family made the trip from New Jersey to see him in action. He had one of his best games on the season, finishing with seven points, four assists and two steals.JT

“A lot of our assists came from our defense,” Lewis said. “When we picked it up on the defense end, we got a lot (of assists) in transition. Our defense jumpstarted our offense.”

Tracy Abrams (torn Achilles) did not participate in senior night festivities, because he will likely be back for a sixth year as long as the NCAA grants him a medical hardship waiver.JT

Groce said he will also seek a medical waiver for Thorne Jr., meaning there’s a possibility the graduate transfer will be back for 2016-17. The 6-foot-11, 270-pound center has played in just eight games this season due to a torn meniscus.

The Illini travel to College Park, Maryland, for a Thursday night matchup with the No. 14 Terrapins. Maryland (23-6, 11-5 Big Ten)JT boasts some of the best talent in the conference with Melo Trimble, Diamond Stone and Jake Layman in its starting lineup, but the Terps have been shaky as of late.

Mark Turgeon’s team has lost three of its last four conference games, and Maryland continues to fall in the national rankings. And the Illini upset the Terps last season behind Malcolm Hill’s 28 points.

But this is a different Illinois team, and Maryland is 15-1 at home on the season. Maryland will likely enter the NCAA tournament somewhere in the two to five seed range.

On Thursday, expect the Illini to rely heavily on their two leading scorers, juniors Malcolm Hill and Kendrick Nunn, who scored 22 and 25 point respectively against the Golden Gophers.JT

“I’m gonna keep being aggressive and keep shooting the ball if I’m open,” Nunn said. “I’m gonna look for my shot and play off my teammates.”