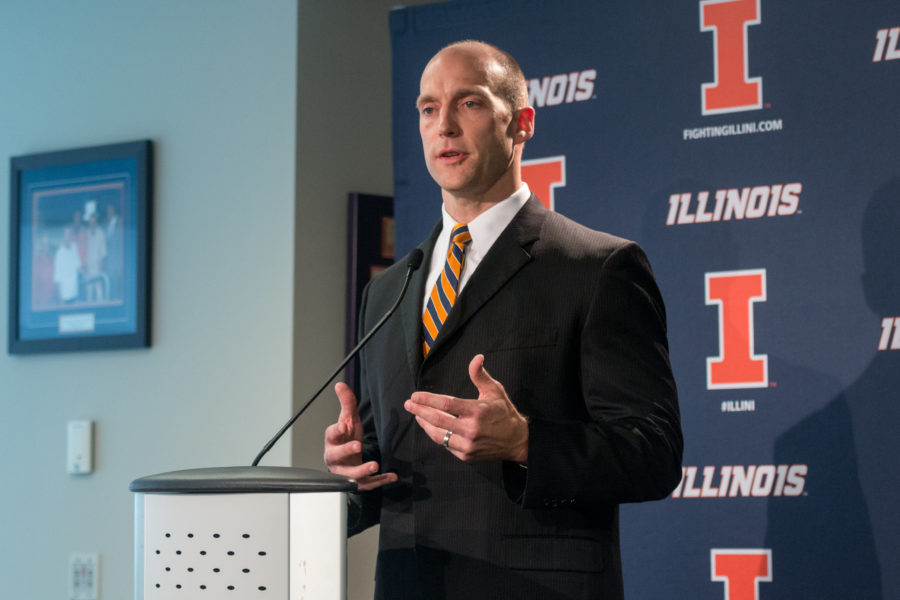 Illinois athletic director Josh Whitman has made his intentions for the University’s athletic program clear.

In his first letter to donors on the day it was announced that he would be the new A.D., he created a phrase that has embodied his one-day tenure: we will win. Whitman echoed the phrase in his introductory press conference a couple weeks ago, and on his first day on the job, he put his phrase into work.

Whitman echoed his goal Saturday when he addressed the media about his firing of football head coach Bill Cubit and offensive coordinator Ryan Cubit. The decision came as a shock to many, including players, but Whitman didn’t want to waste any time achieving his dream for the football program.

“We’re striving for a standard of excellence,” Whitman said. “The goal for us is a championship standard. Today we took a big step in that direction … this decision allows us to start that today.”

The athletic director had only kind words about Bill Cubit and the job he did handling the program during the past six months. The two met in Cubit’s office Saturday morning where the two met for 20 minutes to talk about the decision.

Whitman said that he and Cubit were put into a difficult position with a two-year contract that the former head coach signed on the last day of the 2015 season. Cubit also hired five new coaches onto his staff after it was announced that he would be the new head coach in late-November. All coaches will have an opportunity to interview for the head coach job and other positions when the new head coach is announced.

“This is not a decision that we make lightly,” Whitman said. “This isn’t something we do without great deliberation and thought. We realize that these are real people.”

But the decision was one that Whitman didn’t want to wait nine months to make. The athletic director met with University administration during the past week to discuss the situation and he received full support from leaders.

Many players on Twitter criticized the way in which the decision was announced — many found out about the news from social media. Whitman knew the news was going to come out either way and decided that releasing a press release was in the best interest rather than tell the players first.

Whitman met with the players at 2 p.m. to discuss the change — the first time he met the players. The athletic director knew that the players were shocked but was proud of the way they handled the situation.

Numerous players said positive things about the meetings and there was a players-only meeting after the athletic director was done. Although there were harsh moments when the news originally came out, multiple players voiced their support of Whitman’s plan for the program.

“We believe in Mr. Whitman,” wide receiver Mike Dudek said. “We’re going to ride him through all of this and I believe that he’s going to put us in the best position to succeed.”

Whitman will have to move quickly to find his new head coach. Spring practices were set to start Friday, but those will be delayed until a new head coach is named. Whitman said he would decide on whether to use a search committee in the coming days, but has his list of candidates on mind.

The length of the search will depend to numerous university proceedings. Two weeks usually must pass before the University can post a job listing, but it is likely that there will be an exception made.

Whitman reiterated that he has a plan or he wouldn’t have made the quick decision a week before practices were set to start.

Although many fans might question the timing of the decision, Whitman is focused on brining a championship atmosphere to Champaign, and he doesn’t want to waste any time.

“This is the end,” Whitman said. “I have so much respect for (the players) and everything that they’ve worked through in the past six months and year. This is it. This is the last move, the last situation … our hope now is that we gain momentum moving forward.”