Reactions from the Union crowd to Lovie Smith's hiring 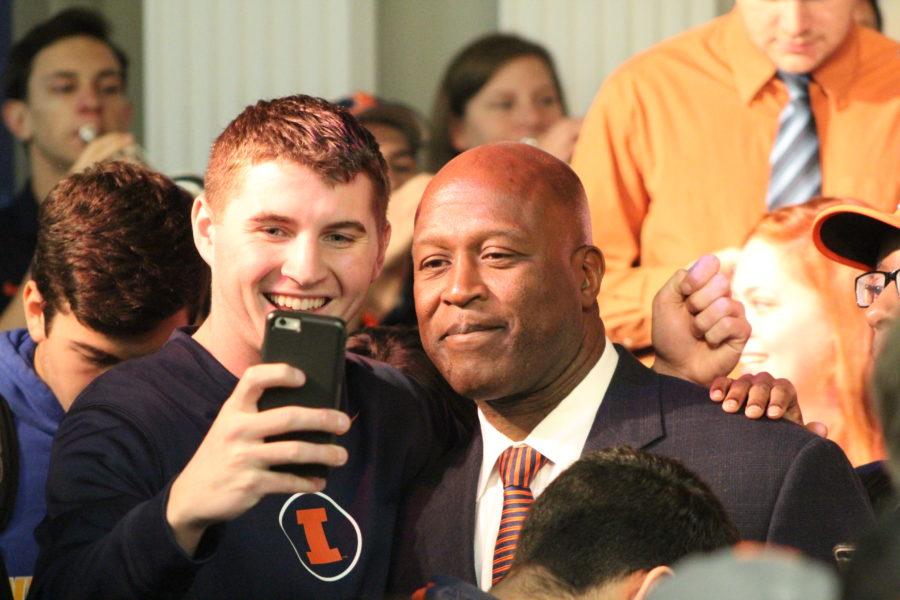 Lovie Smith was greeted with a sea of Illinois fans at the Union on Monday and many were excited to see the former Bears’ coach back in orange and blue. Here’s what five students and fans had to say at Smith’s first public appearance as the Illinois head football coach. 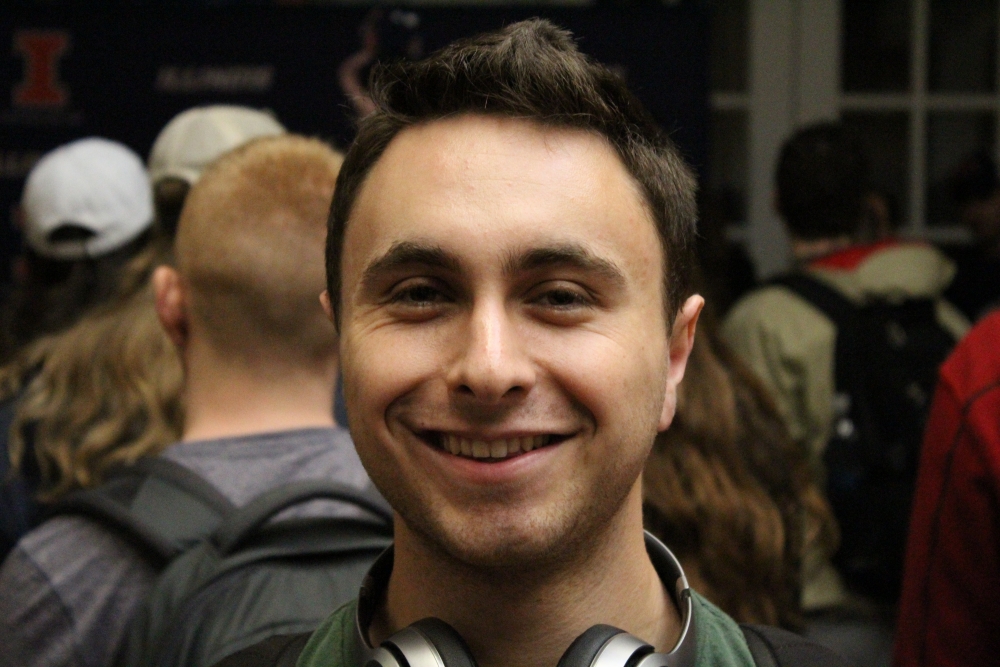 CC: What’s your opinion on the Illinois football program?

SS: Right now, it’s kind of in a state of limbo. We have a lot of guys who could be in the NFL but they need someone to bring them together.

CC: What did you think of the program before they hired Lovie Smith?

SS: I thought this was going to be a really big year for us, in terms of the direction of the program, how the coaching staff would fair and whether we could remain a competitive Big Ten program.

CC: What were your first thoughts about the Lovie Smith hire?

CC: How many games did you go to last season? And will you go back this year?

SS: I went to all of them, and definitely. 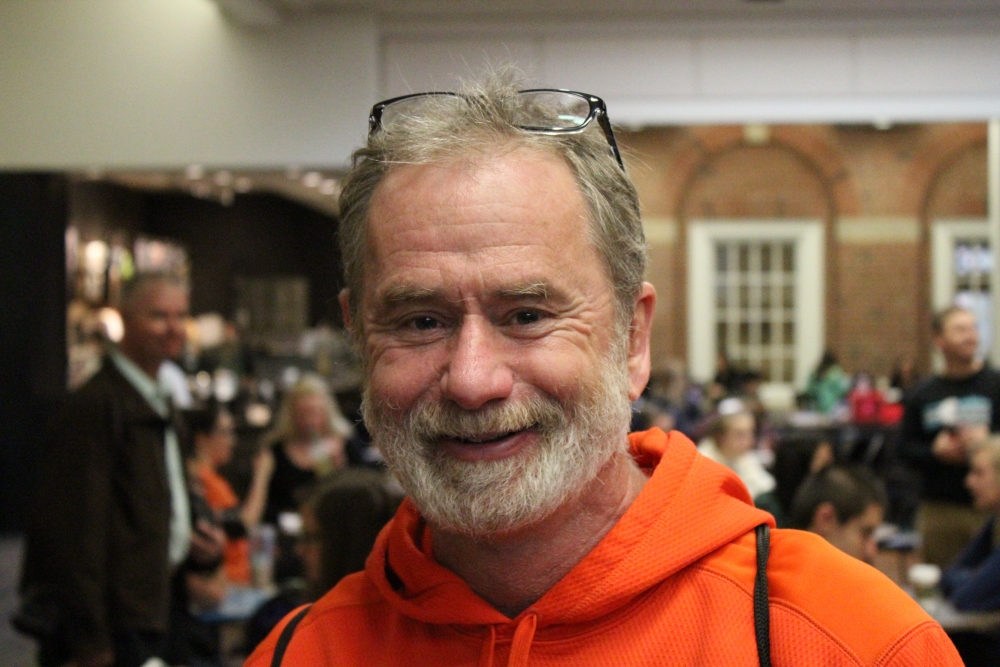 CC: Why did you decide to come out today?

JW: I was out on campus and saw that Lovie was going to be here, so just decided to come out. Just excited to get a glimpse of him, start of a new era hopefully.

CC: Are you a big Illinois football fan?

CC: What’s been your opinion on the team these past couple years as its transitioned from Beckman to Cubit?

JW: I’ve supported them, but it’s been hard. Looking for a ray of sunshine here hopefully for the future.

CC: What do you think bringing in a guy like Lovie does for Illinois?

JW: There’s some excitement, some buzz around the program at last. We’re not going to win immediately, but it’s a process. Again hopefully, we’ll get up there. Josh Whitman, how amazing is it, to do all this in just two days?

CC: Were you surprised when Whitman fired Cubit?

JW: Yeah, shocked. I was out for a run on Saturday morning and came back to 23 texts on my phone. I had no idea and was shocked. Cubit did what he needed to do and he did a nice job, but long term I don’t think he was the answer. 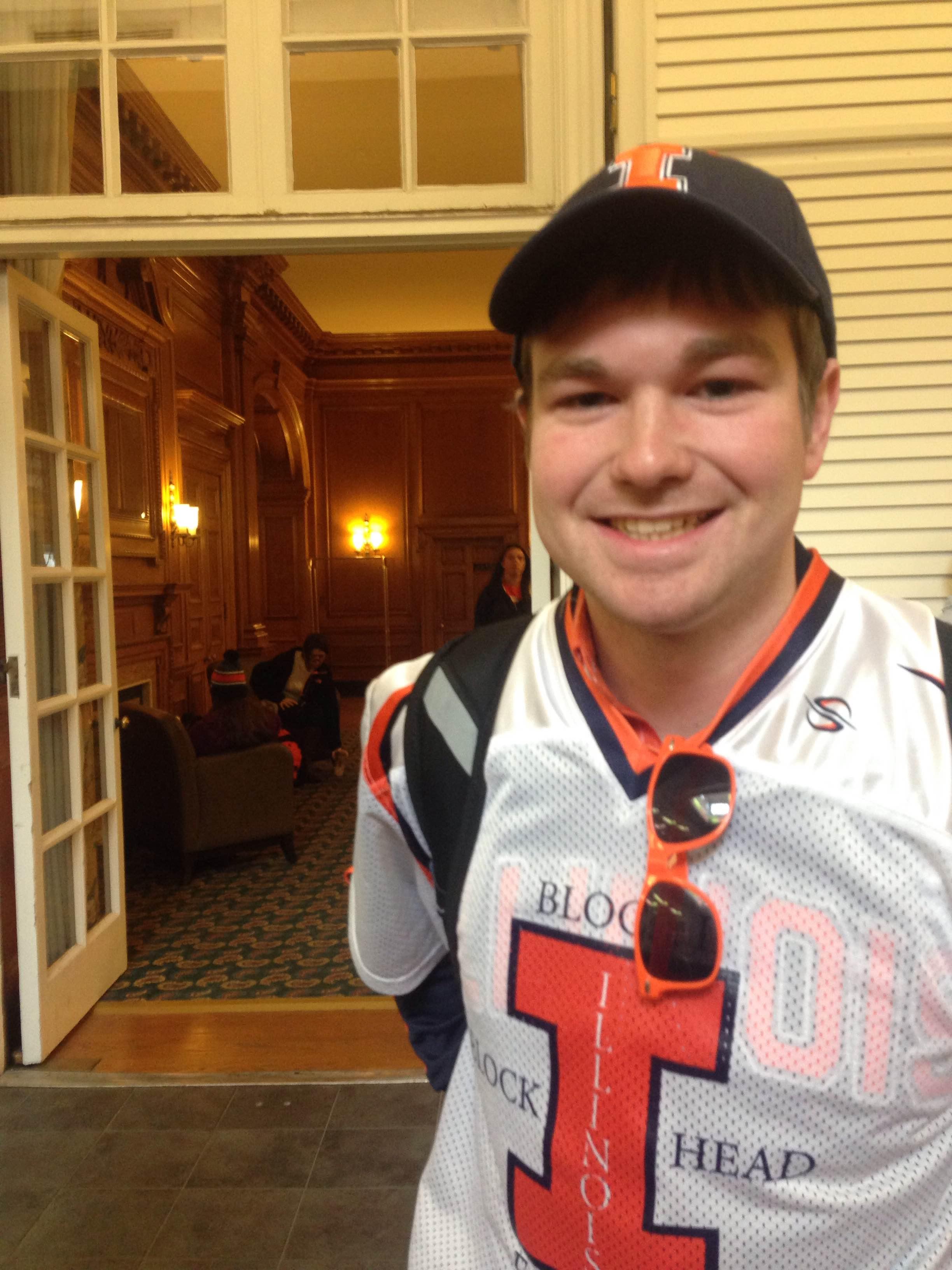 CC: What’s been your opinion of the football program on your time here,

GB: As someone who’s been a third-generation Illini fan, it’s always going to be tough sometimes to compete in the Big Ten. But this year, I can definitely tell, we got a new athletic director and coach who really care about the program, so I’m super excited in the direction this program is headed. I know Josh Whitman will be able to lead us to great things.

CC: What were you thinking when Josh fired Cubit on Saturday?

GB: My dad, who’s an alum, called me in the morning and just let me know. I was shocked and still shocked. Ultimately it was definitely a difficult decision for sure, given how Cubit has stabilized this program. But that the end of the day, I think it was the right thing. Landing Lovie Smith was even more of a hire than any one could have imagined.

CC: What was your reaction when you found out it was going to be Lovie?

GB: It’s a terrific hire, and we’ll be able to recruit Chicago much better. It gives instant cred with a lot of Bears fans in the region. With everything that Illinois has gone through recently, it’s good to get some positive pub(licity) out, and hiring Lovie Smith has done that. 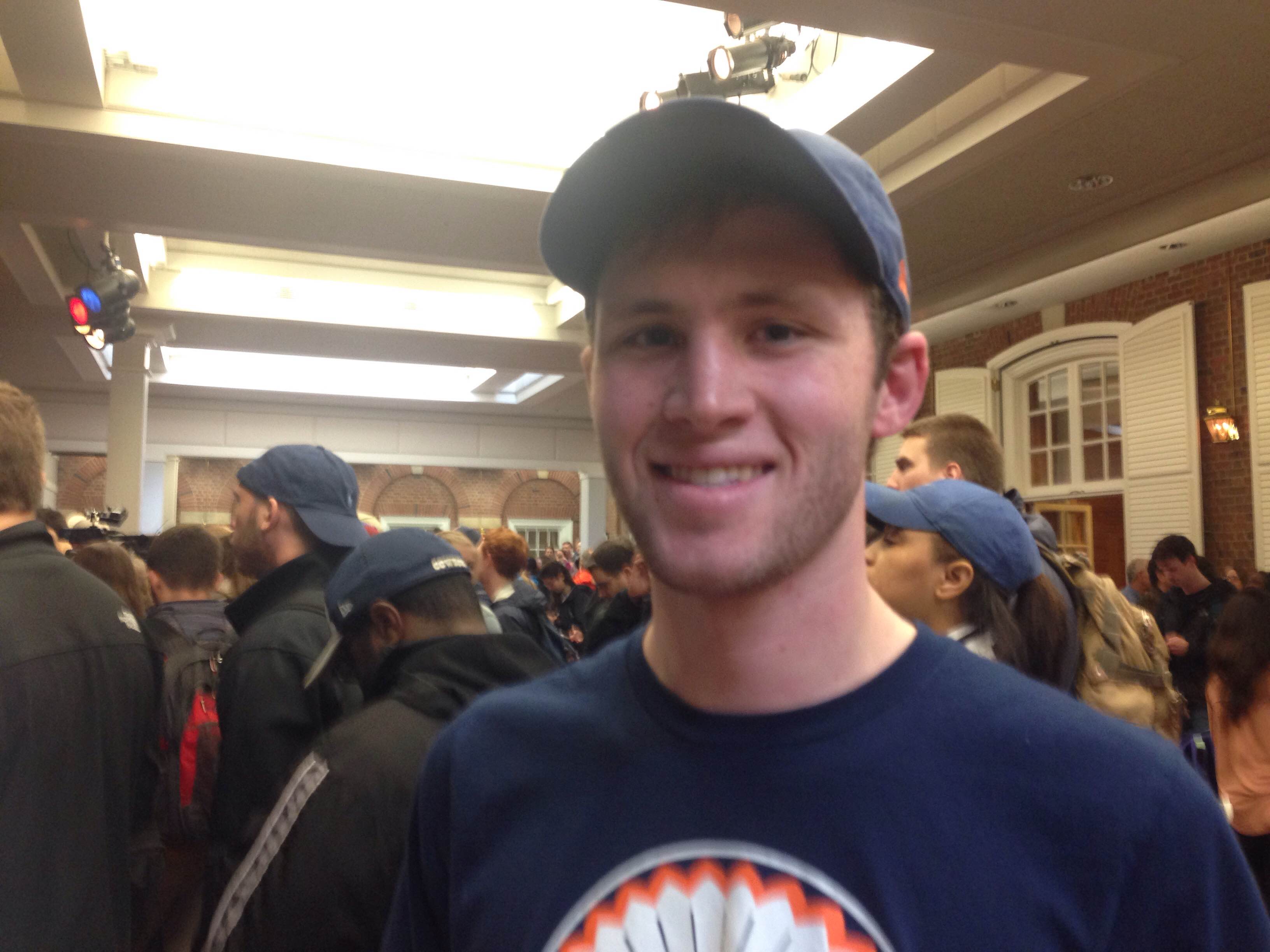 CC: What do you think of bringing Lovie Smith to Illinois?

KW: I’m really excited, looking forward to a coach that will be able to attract recruits from all over the country. Not just some that are in-state and the lower level recruits. With Lovie, I think we’ll be able to get some four- and five-star recruits we couldn’t get in the past.

CC: Does this bring a new air to the program?

KW: I think Lovie brings a dynamic to Illinois we haven’t seen in I don’t know how long. It’s an exciting time for the program.

CC: What was your opinion on Whitman coming in and then firing Cubit the first day.

KW: I was shocked at first. But looking at it now, it makes sense. Obviously, he wouldn’t fire someone if he didn’t have someone in mind in the wings to take over immediately.

CC: What do you anticipate this next year in Block I?

KW: I am anticipating a lot more attention, and I think there it will be bigger, and I think we’ll be a lot better. 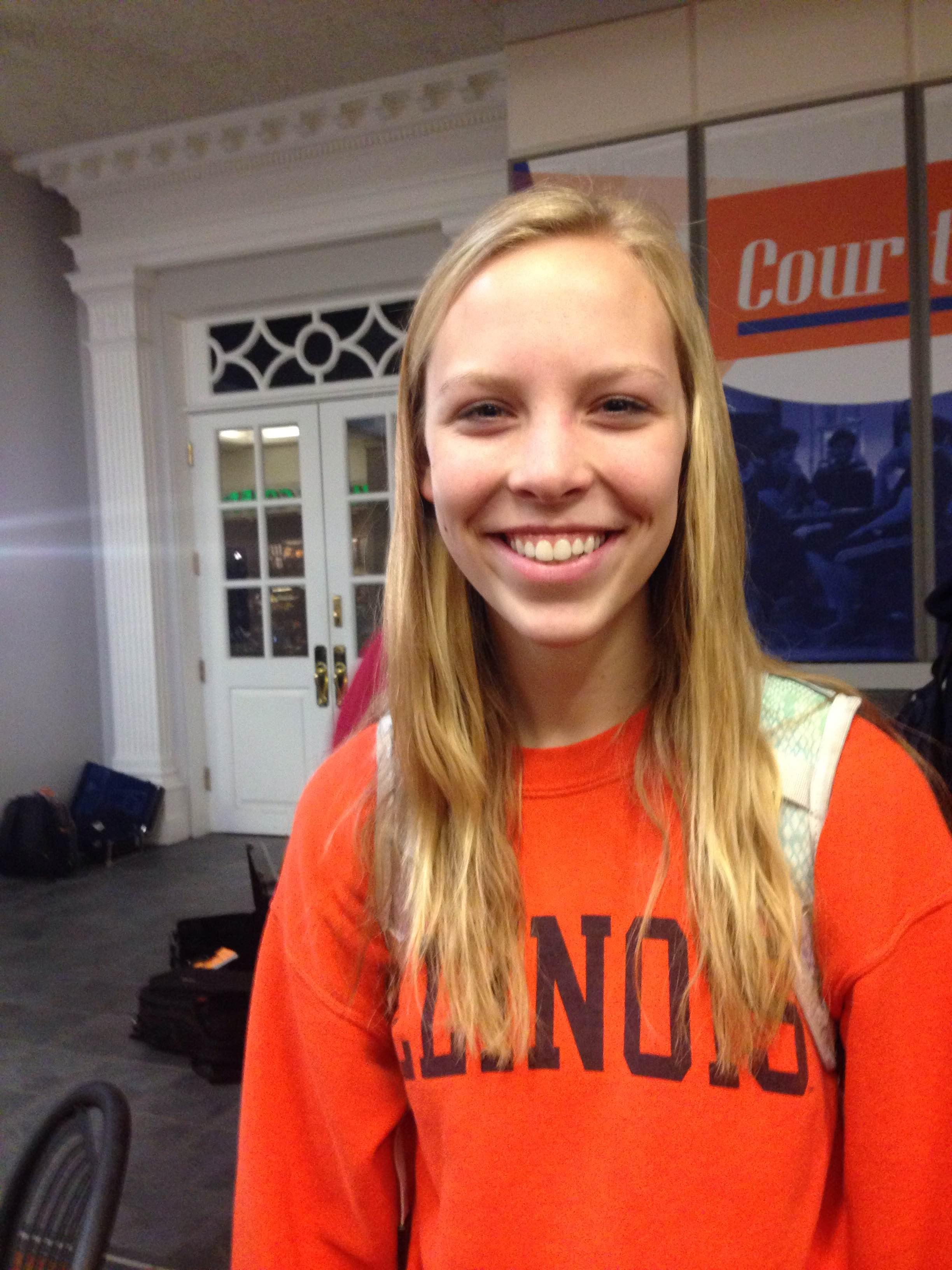 CC: Did you go to games this season?

KL: I went to all the games

CC: What’s your opinion on the Illinois program and atmosphere?

KL: I just wish more people came to games and support the student section. Obviously, it’d be great if we could win some games too.

CC: What do you think of this atmosphere?

KL: This is kind of chaotic, but I’ve always been a Bears fan growing up so it’s kind of cool to have Lovie Smith as our head coach.

CC: Where were you when you found out?

KL: I was in class and got an email about him coming to the Union and decided I had to come.