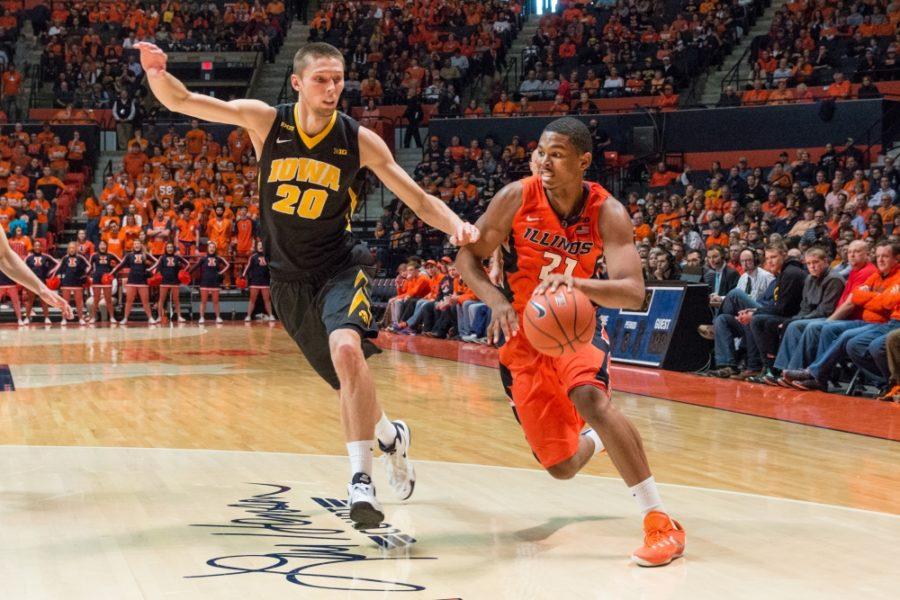 Malcolm Hill and Illinois face Peter Uthoff and Iowa at 1:25 p.m. Thursday in the second round of the Big Ten Tournament.

The Big Ten Tournament is all about turnaround time.

Illinois basketball, fresh off an 85-52 thumping of Minnesota in the first round, will face fifth-seeded Iowa on Thursday at 1:25 p.m. at Bankers Life Fieldhouse in Indianapolis.

The Illini haven’t forgotten that loss.

“We’re happy we got this win,” junior captain Malcolm Hill said after Wednesday’s game. “But as soon as we leave this gym, we have to focus on Iowa.”

Michael Finke’s 17 points led the four Illini who scored in double digits Wednesday, and head coach John Groce will likely need a similar output from the redshirt freshman against Iowa. Finke had not hit double-digits since Illinois’ 78-67 loss to Nebraska on Jan. 16.

He went 2-of-6 in 17 minutes against the Hawkeye’s in the teams’ first matchup, which was his first game back since suffering a knee contusion against Wisconsin on Jan. 31.

“I think (my struggles) were more mental,” Finke said. “My mechanics and shot weren’t changing. I think was all mental. I just had to have confidence in myself.”

Groce watched his team get out-rebounded 43-32 by the Hawkeyes in the February matchup. The Illini topped the under-manned Gophers on the glass 35-26 Wednesday but finished the regular season 331st of 351 teams in rebounding.

The Hawkeyes finished 71st in the same rankings.

Hill followed his career-high 39 points in Sunday’s 86-79 overtime loss to Penn State with 14 against Minnesota. He put up 14 in the first Illinois-Iowa matchup, behind freshman Jalen Coleman-Lands’ 17.

Four of Iowa’s five starters hit double digits in the February matchup, including 23 from junior guard Peter Jok, who finished the season with a 15.8 points per game average. Iowa was one of two Big Ten teams to finish with two scorers who ranked in the top 10 in the conference — Nebraska was the other.

The winner of Thursday’s game plays No. 13 Purdue, the tournament’s fourth seed, in the quarterfinals. The Boilermakers finished the regular season heading the opposite direction of the Hawkeyes. Matt Painter’s team won four of its last five games, including an 83-79 win over then-No. 10 Maryland.

Groce remarked after his team’s win over Minnesota that it was the best his guys had played all season. The Illini are 7-2 as a double-digit seed in the Big Ten Tournament, and the last time they were in that role was 1999. Lon Kruger’s team made it to the tournament title game that year, knocking off three top-25 teams in the process, and eventually losing to No. 2 Michigan State in the championship.

For Groce’s team to repeat that feat, they’ll have to stymie the Hawkeyes on Thursday.