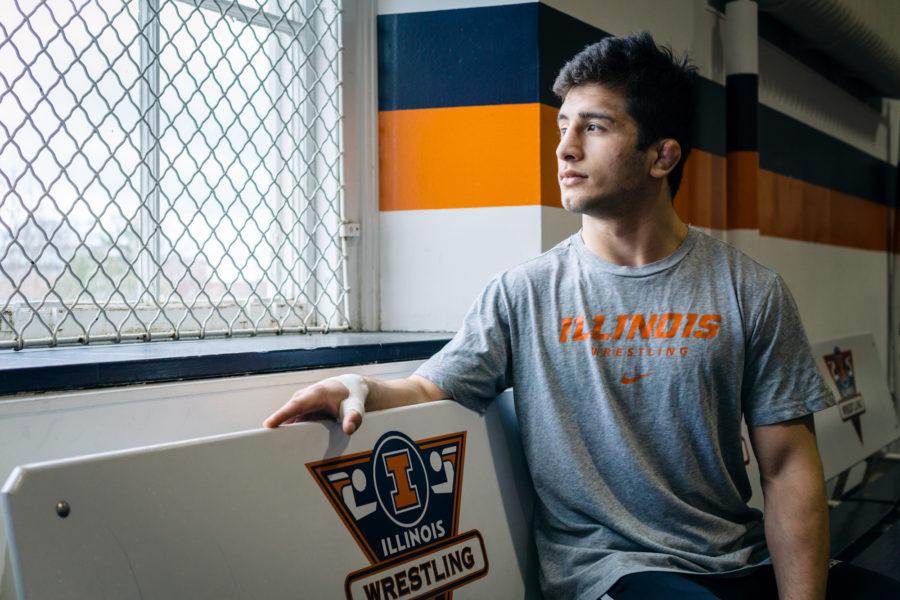 On Jan. 23, Illinois wrestler Isaiah Martinez entered his match against Penn State freshman Jason Nolf with a career record of 54-0.

On March 6, Nolf entered his Big Ten Championship matchup against Martinez with a record of 28-0.

Leading up to the championship bout Sunday, Martinez said he always had a rematch with Nolf in the back of his mind.

“It did weigh heavy on my mind,” Martinez said. “Thinking about that rematch and just knowing the kind of competitor he is, I just have a feeling that I’ll probably see him again in two weeks at the national tournament. It was important to get one at Big Tens because now it’s all about just trying to make adjustments.

“The ball is in his court now.”

Sunday’s bout was a much different contest as Martinez not only won, but said he had a strategy, which he didn’t have in his loss to Nolf.

Martinez defeated Nolf 4-3 in double overtime and earned Most Outstanding Wrestler over the weekend and first-team All-Big Ten in the process.

Going into the contest, Illinois head coach Jim Heffernan had some doubts if Martinez would walk-away with a second straight title.

“Of course, (Nolf) is good,” Heffernan said. “They are two great wrestlers and we knew it was going to be a war. And it was. I fully expect that same type of match every time those two guys see each other.”

In their first contest, Nolf pinned Martinez in the second period. This time, Martinez knew he was going to go the distance.

Martinez said that he remained calm throughout the match, even when he was down 3-2 after a takedown was overturned.

“Last time, it was more out-pace him and out-match him in every aspect and maybe I overestimated my abilities,” Martinez said “This time I stuck to where I was good, stuck to the plan and it all paid off.”

Winning in college wasn’t always on the grappler’s mind, though; Martinez said he didn’t even know much about collegiate athletics when he was growing up. Four-year-old Martinez only thought of getting a gold medal.

Earlier in the season, Martinez said he wanted to compete in the 2016 Rio Olympics.

It’s all about how he feels mentally and physically after the season ends and evaluating his health.

“We’ll assess where my body is and where my motivation is,” Martinez said. “It’s hard to stay healthy in this sport, especially with a season that goes from November to March, it’s a very long season.”

The long season takes a toll on every wrestler, even one as dominant as Martinez, but factors outside of wrestling have weighed him down, too.

Before the season began, Martinez’s father passed away due to cancer. Martinez said it’s hard to replace the first conference title, but believes the second is more important because of what has happened since his first win.

“That first one is special,” Martinez said. “I like to believe that it will be more important because I now understand how difficult it is and found out, last year, how difficult it was to win a national title and climb that mountain.”

Martinez enters the NCAA Championships with 13 technical falls, the most in any weight class. The next closest competitors both have eight technical falls apiece.

Despite picking up the lone loss of his career earlier this season, Martinez was named the No. 1 seed in the national tournament. Not only did the loss not hurt his standing in the eyes of the selection committee, it also didn’t hurt his ultimate goal.

“I did come into college saying that I wanted to be undefeated and to be a four-time national champion. (I’m) no longer undefeated, but I could definitely still win four national titles. I have to get this one first and then focus on the third one.”