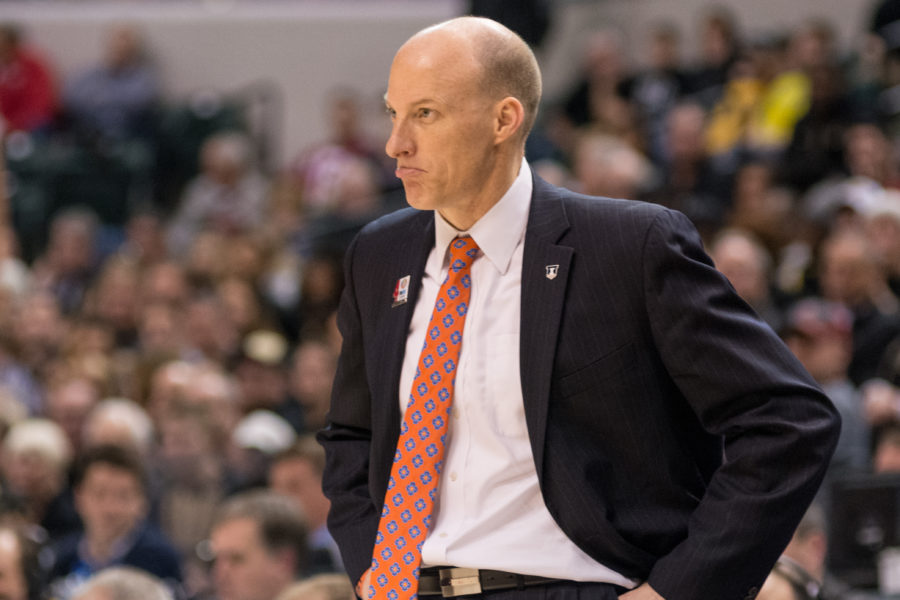 Illinois head coach John Groce watches his team during the 89-58 loss to Purdue in the quarterfinal game of the Big Ten Tournament.

Illinois basketball entered the third round of the Big Ten tournament on its biggest high of the year after upsetting No. 20 Iowa in a 68-66 nailbiter Thursday afternoon. Friday’s tilt against Purdue was an entirely different type of ballgame, as the No. 13 Boilermakers beat the Illini in blowout fashion, 89-58.

“We threw everything at them but the kitchen sink,” Illinois head coach John Groce said. “We tried to make adjustments and alter things during the course of the game. When they shoot the ball like that did from the perimeter, and then they have those guys inside, it puts you in an unbelievable dilemma.”

Small forward Vince Edwards finished with a team-high 14 points on 5-of-7 shooting, including four 3-pointers. Matt Painter’s bunch controlled the pace and moved the ball quickly and efficiently in halfcourt sets, consistently finding open jumpshooters and big men with their hands raised down low.

“They were a buzzsaw today,” Groce said. “Late last night I watched their game against Wisconsin because I hadn’t watched it in its entirety yet. And I saw that they were doing damage from both the three-point line and the interior.”

Twenty-four hours after playing arguably its best basketball of the season, Illinois looked fatigued and out of sync. The Illini didn’t get their legs under their jumpshots and failed to close out properly on the defensive end. Malcolm Hill, Maverick Morgan and Kendrick Nunn combined for 46 points, but the rest of the squad totaled just 12.

There was no carryover from Thursday’s stunner for Illinois, who shot 22-of-56 from the field and 4-of-18 from downtown on Friday. A Kendrick Nunn steal and breakaway finish at the rim was the closest thing to the magic of the Iowa game.

“I thought we had great resiliency (against Iowa) when we got popped a couple times,” Groce said. “Today, it was just hard because of how well that they played.”

The Boilermakers out-muscled the Illini around the basket, outrebounding Illinois 42-24 including 11 offensive boards.

Next up for Purdue is a 1 p.m. Saturday matchup with Michigan in the tournament semifinals. The Wolverines upset Indiana on Friday thanks to a Kameron Chatman game-winning 3-pointer.

Groce said he sensed his team coming together late in the season, but it wasn’t enough against Purdue.

“The thing that stands out for me for this team is the perseverance of the group. They’ve been through an awful lot – probably as much or more than any team I’ve coached during my eight years.”

“I’ve always said this was an adjustment year for us,” he said. “We never make excuses, and I think the adjustments we made. We found a way to put ourselves in plenty of positions to win a lot of the basketball games we lost with all the injuries that we had.”