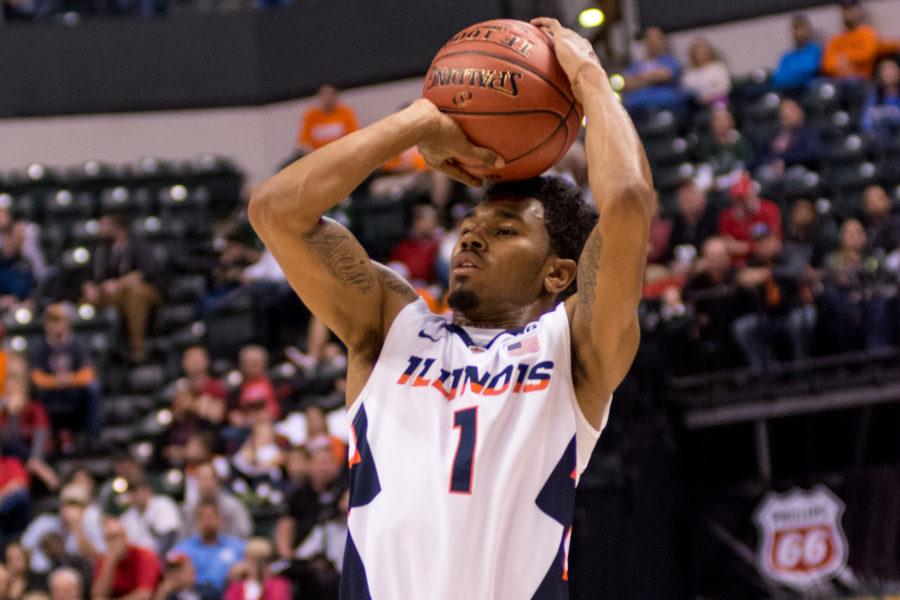 Illinois’ Jaylon Tate shoots a three during the game against Minnesota at the Big Ten Tournament in Indianapolis, Ind. on March 9. The Illini won 85-52.

The Illinois basketball team made headlines a day after it was eliminated from the Big Ten tournament, but not for the right reasons.

Illinois athletic director Josh Whitman and men’s basketball head coach John Groce released a joint statement that they are aware of the situation. Tate has been suspended indefinitely from all team activities until the legal process is compete.

“Tate has been indefinitely suspended from all team activities pending legal proceedings and an investigation into the allegations,” the statement read. “It is important that we take time to fully understand the events of last evening before passing judgment. We condemn domestic violence in all its forms and will move swiftly and decisively if these allegations are substantiated.”

This is the second basketball player to be arrested in the past month. Sophomore forward Leron Black was arrested on Feb. 20 on a felony charge of aggravated assault after an incident at an Urbana nightclub.

Former Illini Darius Paul was arrested over the summer during the team’s trip to Europe on charges of vandalism, public intoxication and resisting arrest. This caused Groce to dismiss Paul from the team after Paul was suspended the previous year.

Follow The Daily Illini for continued coverage of the breaking news.