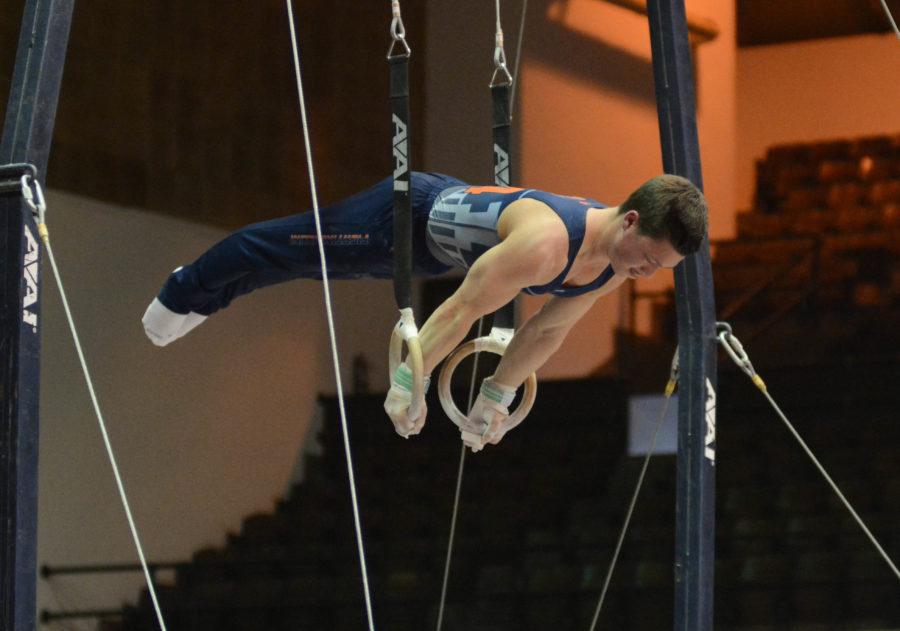 Following the competition, Diab said the experience would have a great impact on the rest of his season.

Since then, the 5-foot-2 all-arounder has been on a tear, raising his level of competition when Illinois head coach Justin Spring believes the team needed it the most.

In the first competition following the Winter Cup, Diab posted career-highs in every event. He and reigning Big Ten Gymnast of the Year, Bobby Baker led the way for the Illini, who went on to post the highest team score in their program’s 86-year history.

Diab’s success only continued Saturday against Oklahoma, and it became clear as to why his teammates and coaches have nicknamed him “dad.” The freshman showed a lot of maturity and no fear against the No.1 Sooners, on his way to being named Big Ten Co-Freshman of the Week with Ohio State’s Alec Yoder.

Even in defeat, Diab earned his fourth and fifth career titles after posting 15.600 on still rings and 15.250 on floor exercise – both of which are now his new career-highs.

“The reason we recruited Alex, besides obviously talent and ability, is his level-headedness,” Spring said. “Alex doing what he’s doing as a freshman is very impressive.”

Spring is no stranger to adversity.

The former Illinois star tore the ACL in his right knee at the 2007 Visa Championships, before rehabbing and eventually winning a bronze medal the 2008 Beijing Olympics less than a year later.

Spring knows it was not easy, but he does know it was possible. Now as  coach, it’s not just himself he has to worry about. Illinois’ health has become yet another obstacle standing between Illinois and the Big Ten Championship crown.

Sophomores Bobby Baker and Chandler Eggleston, who began the 2015-16 season winning a slew of individual titles, have stumbled through the last two meets of the regular season due to injury. With two of its best athletes not feeling 100 percent, Illinois pulled out a narrow victory against No. 10 Michigan, but showed that it would need a complete roster to compete against the best in the country, after No. 1 Oklahoma soundly defeated them on senior night.

Eggleston continues to battle an ankle injury that kept him out of the floor exercise against the Wolverines, and sidelined him for the entire competition against the Sooners – despite being put on a painkiller. Baker, on the other hand, is dealing with two finger injuries that kept the sophomore standout from competing in the all-around against the reigning NCAA champs.

“The rest is always the tricky part about a season,” Spring said. “How do you rest and heal and recover … but also maintain your readiness for competition? I don’t know. It’s going to be tough. We’re going to do everything we can.”

Spring hopes the next week and a half will allow enough time for Eggleston and Baker to rehab and prepare for a run at the Big Ten Title in Columbus, Ohio.