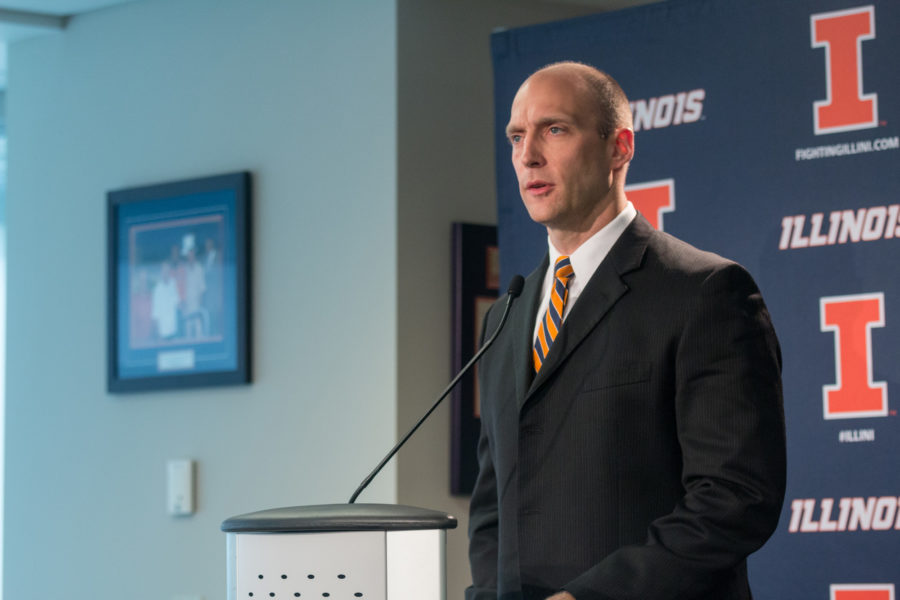 In a joint press conference, Whitman reiterated his support of Groce and voiced his confidence in the Illini coach’s ability to lead the program during a three-year absence from the NCAA tournament and after a year when four players have been involved with off-the-court issues.

“My position has not changed on John (Groce),” Whitman said. “There are a lot of great things happening in our men’s basketball program right now. … I’ve got great confidence that John is the right person to lead us.”

The press conference came a couple of weeks after Whitman gave Groce a vote of confidence and two Illini players had been charged in separate events of domestic battery. Junior guard Kendrick Nunn turned himself in to Champaign Police on March 17 after a warrant was issued. Nunn was charged with two counts of domestic battery over the weekend.

Junior guard Jaylon Tate was arrested on March 12 for a misdemeanor charge of domestic battery.

In February, sophomore forward Leron Black was arrested on a felony charge of aggravated assault after an incident at an Urbana nightclub.

All three players will remain indefinitely suspended from all team activities until the legal process takes its place.

Both Whitman and Groce couldn’t comment about specific players or details because of the pending legal processes, but both addressed the severity of the allegations and they were not things that were going to be overlooked.

Groce mentioned the importance of his role of being a teacher to his players. The Illinois head coach talked about how much time he and his staff spends with the players, trying to educate them to make the best choices when the coaches aren’t around the players.

While Groce and his staff can try their best to educate the players of how not to put themselves into difficult situations, Groce also said it’s up to the players to make good choices — a key term he used throughout the press conference. The head coach spoke about the importance that character has within his current players and those that he talks to when he recruits prospective players.

Although Groce reiterated his confidence in his players and the culture that they built in their locker room, he did mention that he was concerned given the events that have taken place in the last few months.

“I believe in those guys and I know that they believe in what we’re doing and how we’re doing it,” Groce said. “I think our players are listening. I think they’ve made some bad choices. At the core level, it comes down to making great choices.”

While many fans expected Whitman to make a quick decision on Groce like he did with former Illinois head football coach Bill Cubit, Whitman reiterated his belief in Groce and the process. The athletic director said that his job is to make the right decision and voice his support for someone that he trusts to lead the program to a championship-caliber level.

Now with spring practices coming up and a big upcoming recruiting class left to be secured, Groce is excited to look toward building that high standard that Whitman has set.

“We’re excited about the opportunity to move forward. For us nothing has changed. I believe in where we’re going,” Groce said. “We’re confident we can take steps forward to make this a championship-level program, one that our community and fanbase is proud of.”