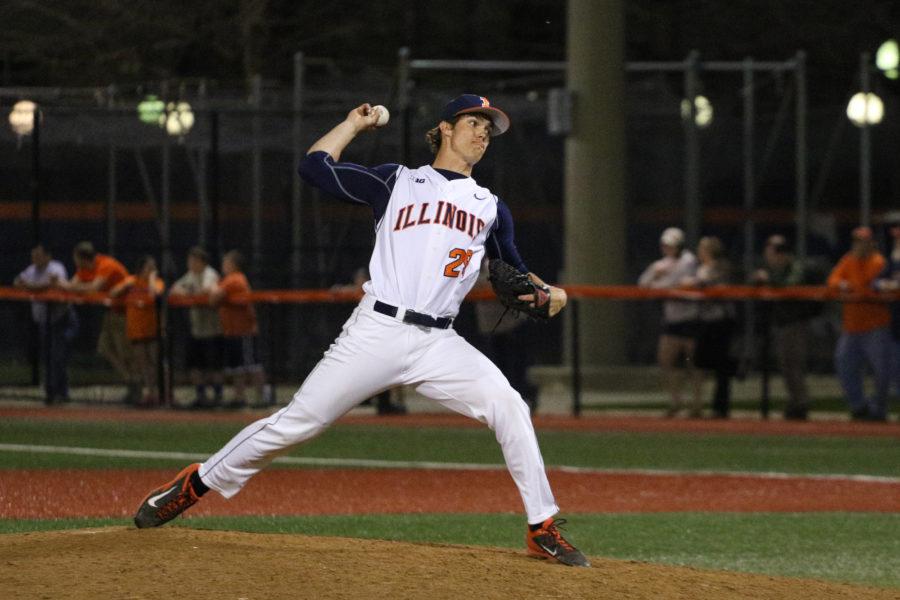 Illini baseball (9-10, 1-0 Big Ten) supplied right-hander Cody Sedlock with an early lead in its home opener at Illinois Field, and it was all the dealing ace needed to shut down the Nittany Lions (9-11, 0-1) in Friday’s 5-0 win.

How it happened: Illinois took advantage of Taylor Lehman’s shaky control earlier on – the southpaw hit two batters and continuously fell behind in the count in the first inning, surrendering four runs in that frame. Anthony Drago, Doran Turchin and Jack Yalowitz were each credited with an RBI. Two runs scored on Yalowitz’s single but he was credited with one RBI instead of two because of an error by Penn State second baseman Christian Helsel.

Third baseman Trent Hammond drove in Illinois’ fifth run in the third inning with a single to left. Catcher Jason Goldstein was about to score a second run but failed to reach home before Yalowitz was thrown out at third to end the inning.

“It relaxed the team a little bit,” head coach Dan Hartleb said of scoring early. “We didn’t bang the ball all over the ballpark but (Penn State) made a few mistakes as far as putting guys on, and we found ways to get those runs in. A productive first inning is always helpful”

What it means: Illinois, who has won 10 straight against Penn State, started off Big Ten play with a victory. Sedlock fanned 10 in seven innings to tie his career high in strikeouts. The first time he reached double digits in that category was in the season opener against Tulane. He has 44 punch outs over his six outings. Relief pitcher Charlie Nasso pitched the last two innings and gave up no runs on two hits while striking out three.

“In other games I’ve felt better physically,” Sedlock said. “But it was one of those games where I was able to pitch a little bit more than throw.”

The Illini picked up right where they left off at home last season. The team lost only four games at Illinois Field in 2015, two of which came at the hands of Vanderbilt in Super Regional play.

“It couldn’t of been much better,” Sedlock said of the team’s home opener. “Hitters did well in key situations, and we have a lot of momentum going into tomorrow.”