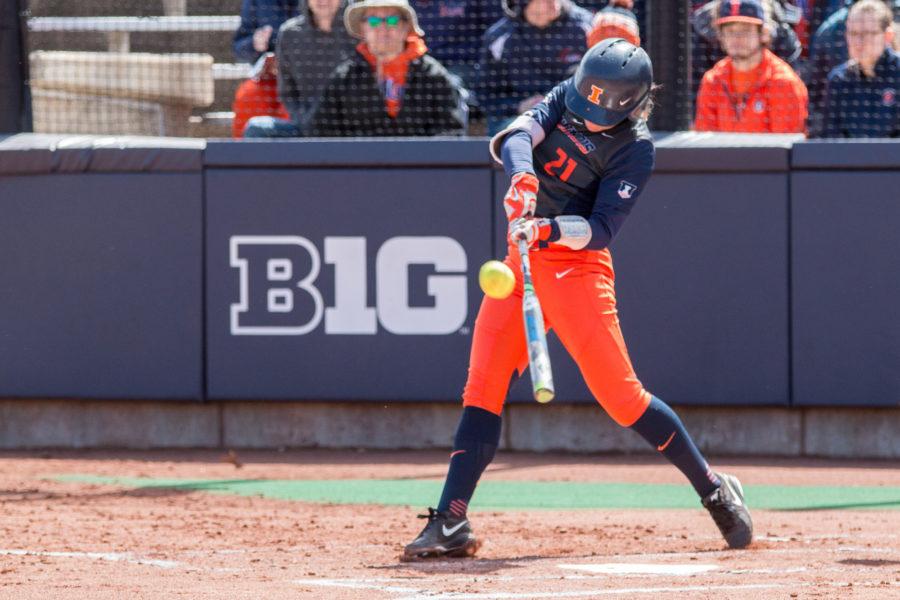 Illinois second baseman Allie Bauch hits a single to left field during game two of the series against Nebraska at Eichelberger Field on Saturday, April 2. Bauch had 3 hits in 5 at bats in the Illini’s 10-5 loss on Saturday.

After beginning the season traveling the country, the Illinois softball team is adapting to being back on their home field.

The teams past six games have come at Eichelberger field, bringing with it mixed results.

The majority of these home games have come against conference competition, with last weekend’s trio of games being no different. The team took squared off versus Rutgers where it was only able to win one of its three contests.

Head coach Tyra Perry reminds her team that conference play is here, and in order to continue its success on the season it must compete at the highest level possible.

“We did not make adjustments fast enough,” Perry said. “We had a lot of giveaway at-bats. We are in the Big Ten; you have to hit the ball. We know that and normally we do, but today we could not quite find a break and could not quite get solid contact. We will continue to work on that and do better next game.”

Game one brought the team’s only victory bludgeoning the Scarlet Knights 8-0.

Ace pitcher junior Jade Vecvanags nearly threw her second no-hitter of the season, quieting the Rutgers bats, and only allowing one hit during the contest.

Perry thought that the big-win was a solid start to the weekend, crediting her pitcher’s remarkable performance and the stellar defense behind her that kept a few balls from escaping the in-field.

“Today was a good start to the series,” said Perry. “I was really proud of Jade Vecvanags as she came through and pitched her game today. I was also proud of our defense. They played really solid behind her.”

The weekend went downhill from there with the team losing its next two contests.

After holding a lead until the sixth inning in game two, Rutgers scored three to force the game into extras. In extras the Scarlet Knights were able to score five and ultimately win 10-5.

Vecvanags was not able to do repeat her earlier performance, giving up two runs in the team’s 3-1 loss.

Senior Allie Bauch scored the Illini’s only run of the game, hitting her fifth homerun of the season in the bottom of the sixth.

The recognition comes after taking two of three from previously No.24 ranked Nebraska. On the year Illinois is 3-2 when facing ranked competition.

Illinois will travel to Normal, Illinois, Tuesday for a single game versus in-state rival Illinois State. ISU is 10-23 on the year, partially because of a brutal schedule. Nine of the team’s games have come versus ranked foes, including three in the top five.