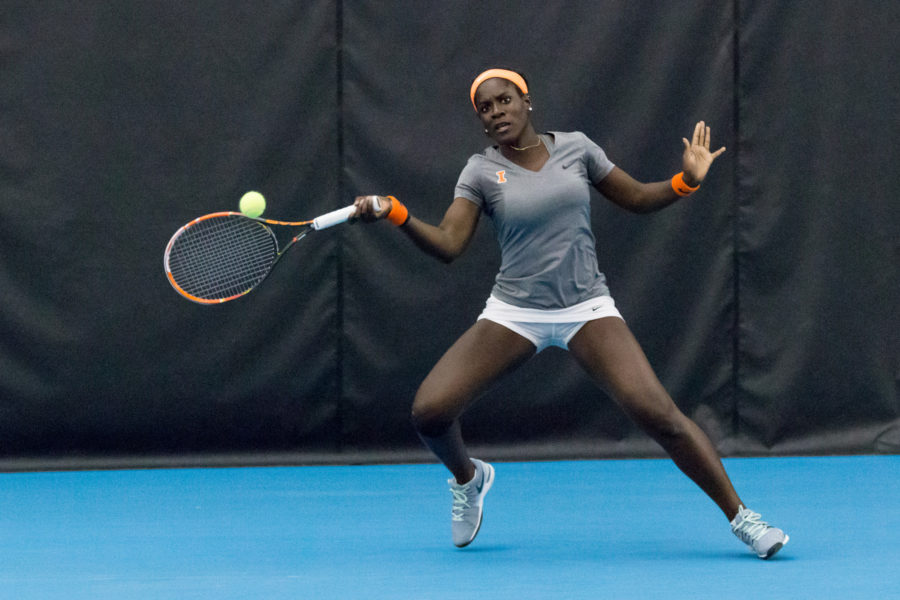 The Illini continued that trend against their matches over the weekend, downing the Iowa Hawkeyes on Friday evening, defeating Big Ten counterpart, the Nebraska Cornhuskers, Sunday morning. This leaves the Illini at 10-6 on the year, and 4-1 in the Big Ten. JT

The Illini took down the Hawkeyes, 7-0 at the Atkins Tennis Center on Friday. This dropped the Hawkeyes to 10-10 in the spring and a diminishing 0-6 record in Big Ten play. It also put the all-time series between the two at 28-25 in favor of the Illini. JT

“It’s tough to get a win in the Big Ten period, let alone a 7-0 victory,” head coach Evan Clark said. “I was really pleased with the way that we took care of business.”

Clark credited singles play to be the difference for the Illini against the Hawkeyes. Louise Kwong, Alexis Casati, Ines Vias, Madie Baillon, Jerricka Boone and Jaclyn Switkes all won their singles matches.

“I can’t remember the last time we won 12 sets in singles for straight-set victories,” Clark said. “To get a 7-0 victory tonight, I was really proud of the team. We keep talking about six people showing up, and six people showed up for us tonight.”

The Illini then moved on in preparation for the arrival of the Cornhuskers. Illinois was able to come out on top against No. 75 Nebraska and handed the Cornhuskers their fourth match loss of the spring.

Doubles play seemed to be the factor in this match, with Kwong and Vias leading the Illini.

Kwong and Vias are ranked No. 46 in the country and continue to roll through Big Ten opponents, remaining undefeated. JT

“Similar to the Iowa match, I thought we played really well in singles,” Clark said. “We came out and got good starts and made some good adjustments. We also did a good job closing again.”

The Illini prepare for another Big Ten duo coming to town, as they will take on Indiana and Purdue next weekend. JT