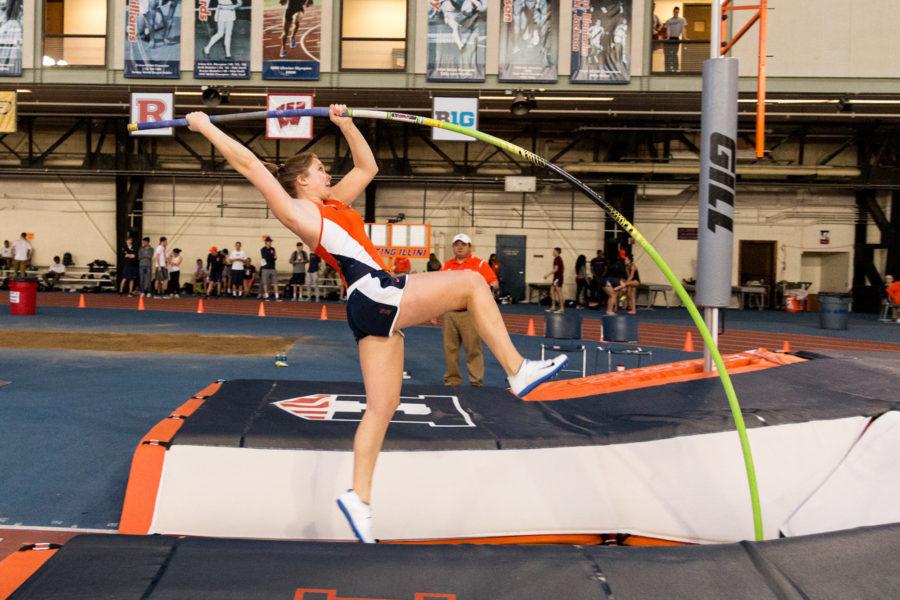 Illinois’ Sara McKeeman propels herself into the air during the pole vault event at the Orange and Blue meet on Saturday, February 20, 2016. Blaze placed third in the pole vault with a height of 3.97 meters.

The Illinois women’s track and field team battled gusty winds all weekend at the Big Blue Classic hosted by Eastern Illinois University in Charleston, Illinois.ej Despite the conditions, the team continued to show improvement and 10 Illini athletes finished in the top five of their events.ej

Junior Kandie Bloch-Jones picked up where she left off in her first high jump competition since the NCAA Indoor Championships, winning the event by clearing 1.71 meters on her first attempt. ejRunner-up Haleigh Knapp of EIU also cleared 1.71 but missed her first attempt to do so.ej

1.71 meters is below the standard Bloch-Jones set in the indoor season – she cleared 1.83 meters earlier this season – but winds of up to 35 miles per hour made it hard for any of the athletes to perform at the top of their games.ej

In the pole vault, Illinois sophomore Sara McKeeman and senior Jennifer DeBellis both cleared 3.64 meters while battling the winds.ej McKeeman finished in second on tie-breakers, while DeBelllis finished in fourth behind UIC’s Annemarie Reid.ej

After winning her heat, senior Kymbriona Taylor set a new personal best in the 100-meter, clocking in at 11.85 seconds.ej Taylor beat out Illinois State’s Elise Anderson by 0.01 seconds for second place behind EIU’s Anita Saffa.ej

Sophomore Jasmine Berry beat out junior Lindsey Rakosnik by the same margin in the 400-meter. Berry finished second with a time of 58.85 seconds, and Rakosnik was right on her heels, finishing in 58.86 seconds and taking home third place.

The Illini hurdlers continue to build a catalogue of strong performances this outdoor season. The duo of freshman Jayla Stewart and junior Kortni Smyers-Jones have finished in the top five in all competitions so far this season.ej

This time out was no different, as Stewart and Smyers-Jones finished head and shoulders above the competition. Both set personal records in the final and took home first and second, respectively.ej Stewart’s time of 13.48 seconds should move her up into the top 40 nationally.

Smyers-Jones also continued to progress, and her time of 13.78 is down almost 0.2 seconds from last weekend at the Black and Gold Invitational in Nashville, Tennessee.ej

The Illinois 4×100 relay team of freshman Sade Hargrove, sophomore Janile Rogers, Stewart and Taylor has been consistently excellent for the Illini so far this season. After finishing in third and then second in their first two competitions, respectively, they managed to walk away with the top spot at the Big Blue Classic.ej Their time of 47.03 seconds was actually slower than their last two performances, but it was enough to beat out teams from Illinois State and Indiana State.ej