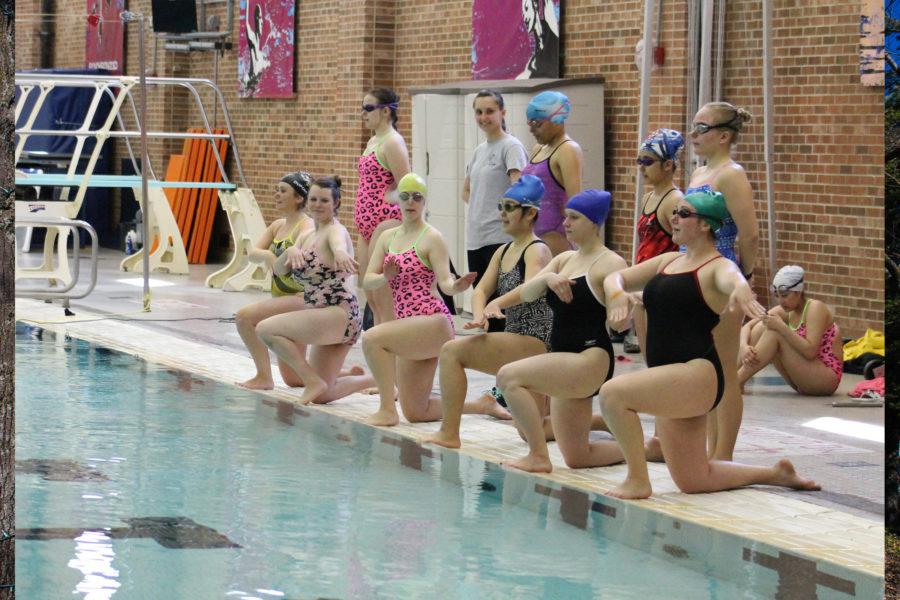 The Illini synchronized swimming club practices a routine titled “He No Me Lilo” at the ARC indoor pool Sunday in preparation for its Moms Weekend show.

That post was enough to prompt her into messaging the other swimmer, Shayne Snyder.MG

Snyder informed Hayden of the club synchronized swimming team at Illinois. Then, they went on to meet in-person at one of the registration days.

Since that registration meeting day, both have joined the club synchronized swimming team and have become friends. Now, months later, the team will perform together for the first time all year at the club’s annual Moms Weekend show April 10.MG

In the months leading up to the show, the biggest focus for the team is creating a bond during the fall according to senior Caitlin Walerowicz,MG the club’s vice president.

“It’s mostly focusing on getting comfortable by bonding because it is a sport where you need a strong team bond,” Walerowicz said. “You have to be able to trust that whoever’s tossing you out of the water or is going to be kicking hard right next to you isn’t going to hit you in face.”

For freshman Vickie Frueh, the team’s bond is what’s keeping her there.

Frueh hadn’t synchronized swam before coming to campus. But she saw the club’s booth on Quad Day and it was one the organizations she left with information from. Her goal was to stick with at least one club she signed up for, and synchronized swimming ended up being that one.

She said she can tread water well, enjoys swimming and found the sport “out there” and intriguing, but the “very welcoming” people are what really made her want to stay.

“I haven’t been doing this for years, so I don’t have that tie to swimming,” Frueh said. “So it’s more like the tie to the people and the environment that we’re in.”

In terms of the sport itself, Frueh has the basics down. She still finds it frustrating at times, though. She said there are muscles she still hasn’t built up that would be useful to perform particular skills, but that won’t stop her from performing in the Moms Weekend show.

Swimmers are placed in different routines based on skill level, so Frueh will get to show off her newfound skills for not only her mom, but for all of the moms there.

“It’s fun to have it for the moms because they’re worried once you go off (to college),” Frueh said. “So this is a time when you can show them what good things you’re doing at school and not getting into trouble. It’s something that just kind of keeps you grounded. And they’ll like us one way or another whether we do good or not.”

Illini synchronized swimming, which Walerowicz said is the University’s oldest club sport, has held its show during Moms Weekend ever since its creation back in the 1920s or 1930s because the moms don’t get a football game like dads do for Dads Weekend.

“We’ve always done it as a way to show our moms that we’re working hard in college,” Walerowicz said.

Sunday’s show will mark Walerowicz’s fifth show — the team also had a winter show her freshman year — so she knows what it’s like preparing for a performance. But that hasn’t made the preparation for her final appearance any less stressful.

She said the two weeks before the team’s show are referred to as “Hell Weeks” because of how much needs to be done: turning in paperwork, coordinating with the ARC, making sure all of the swimsuits arrive on time and getting routines ready.

And the stress doesn’t subside on the day of the show either.

“Five minutes before the show, your heart feels like it’s going to beat outside of your chest,” Walerowicz said. “Here you are completely vulnerable in nothing but your swimsuit, and you have to really rely on yourself to get out there and perform your best with a huge smile on your face.”

Walerowicz added that it’s a relief when the show is over, but it’s also sad because the team is done practicing and performing for the season. Because of that, the club likes to coordinate social events for everyone to spend time together post-season, when no one is stressed out about the sport.

“You’re just really happy that you have each other in the end,” Walerowicz said.