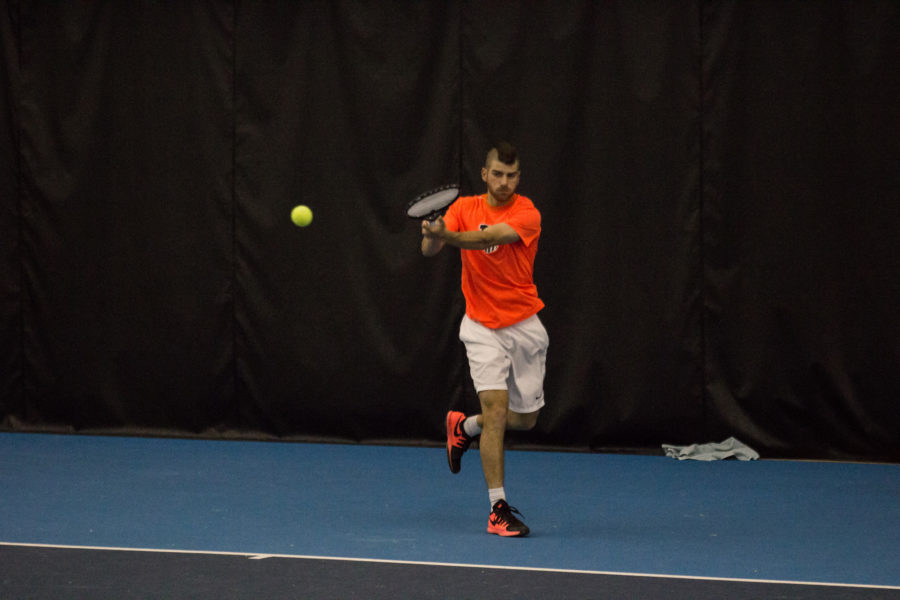 Illinois’ Aron Hiltzik attempts to return the ball during the meet against Ball State at Atkins Tennis Center on April 3, 2016. The Illini won 4-0.

The Hawkeyes’ record has dropped to 4-6 against ranked opponents this season.

On the other hand, Illinois is looking for its sixth straight sweep after winning over the weekend against Minnesota, No. 30 Wisconsin and Ball State.

The goal for both coaches is to change a program that has had just one 10-win campaign in the past six seasons (2014-2015, Wilson’s first season at the helm), which Dancer believes will happen.

“I think Ross has infused a lot of energy into that program just over the last couple of years and Greg Ouellette, we got a ton of respect for him,” Dancer said. “The coaching staff is great and they got a lot of talented guys on the team and that’s always a challenge.”

Three out of the four players in last season’s matchup lost in straight sets. Jacoby gave the Hawkeyes the only point of the match.

Illinois, on the other hand, returns just three players. The losses of Farris Gosea and Tim Kopinski to graduation hurt the team.

This season, the Hawkeyes have three players with plus .500 records in singles play.

Jacoby and Theodorou are both 12-5 on the season. In conference competition, Jacoby is 1-2, while Theodorou has yet to win a single match in three attempts.

For the Illini, No. 4 Aleks Vukic continues to dominate in singles play, as the “Aussie” has won his last six matches that he has competed in (sat out the second-half of the doubleheader Sunday against Ball State due to rest).

After two Big Ten wins on Friday and Sunday, the Illini moved to a tie with Michigan for third in the conference. Iowa is in a tie for ninth with Indiana.

Just six matches remain for the Illini before they defend their Big Ten championship in Minneapolis, Minnesota, at the end of the month.